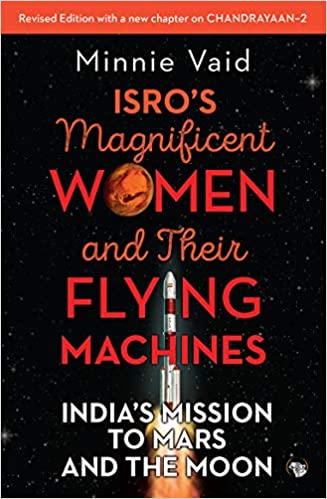 ISRO’s Magnificent Women and Their Flying Machines – India’s mission to Mars and the Moon  by Minnie Vaid, published by Speaking Tiger Books, touches upon two very diverse topics. First, it explores the role of ISRO, the Indian Space Research Organisation in fulfilling India’s dreams of being a key player in matters of space. Then, it takes us into the world of women in science, exploring how these exemplary women who work at ISRO have overcome gender barriers to emerge as true professionals in their own right.

It is tough to be a WOMAN scientist. Yes, this statement is true of today…and surprisingly so. Gender disparity in the workforce is not something new…but when we take on the realm of science, the difference becomes all the more glaring. Women in science have long been victims of biases. However, there is a group of women scientists who are slowly, surely and deeply dissolving these gender barriers. And leading the change are organisations like ISRO.

It is a strange coincidence that I read this book around the time that an article appeared about the experiences of Christina Koch, a woman astronaut in space. This made me look at the book from an additional angle. What were the unique challenges that these wonderful women in science at ISRO faced when they were chosen to be a part the Mars Orbiter Mission- clearly a super-success story that also brought ISRO in the awareness of common public, who earlier may not have had much to do with space research.

The Mars Orbiter Mission, also called Mangalyaan, has been the subject of a Bollywood blockbuster, Mission Mangal, and not without reason. A team of 500 scientists from 10 ISRO Centres were roped in, with at least 27% of the key executive positions being held by women. Each Indian paid less than rupees 4 for the mission! As the author recounts the various stages of the mission, you will come across several gender stereotypes that are dispelled. For example, the Mars mission was a calculation intensive mission, and the accuracies of the women scientists were fabulous. There goes the stereotype that women are not supposedly good at numbers!

The book paints a detailed and vivid behind-the-scenes picture of the enormous amount of preparation, work and scientific prowess and agility that went into the Mars Orbiter Mission. What also made this mission striking was that it was spearheaded by a remarkable team of women scientists. This is the unique angle that Minnie Vaid looks at in this book.

As she goes on to tell us about this breathtaking mission, about the other projects that ISRO takes up and about the various women who work at ISRO, we get a vivid account of what it means to be a woman scientist working in the realm of space in this day and age, in India. We also learn about the challenges that these exceptional women have overcome.

Reading between the lines

The book highlights the role of the women but it is heartening to see that this is all a part of the larger move towards moving with the times. For instance, this mission also sought participation from general public and used social media to engage with citizens, and young students.

The book is quite detailed and has exhaustive information on the mission. Vaid does a great job of gleaning those aspects that highlight the contribution of the women, their prowess and the challenges that they faced.

Some of the chapters also zoom in onto individual case studies of the ‘ISRO women’. What was their childhood like? How did they come to the positions they are at? What were the gender related challenges that they faced? How do they manage the work-life scenario? For me, these individual stories, read against the backdrop of the whole story of the mission, provide some really poignant insights.

The ‘super’ women in science…

One of the most obvious questions that the book tackles is the issue of managing home and work. The proverbial work life balance, the biggest issue that every working woman has to grapple with! But in all the conversations that I read in the book what really came out loud and clear was the fact that these scientists donned their mantle with gusto.

“The Mars Orbiter Mission exited the earths sphere of influence to proceed towards its target orbit around Mars with a series of well-planned and executed manoeuvres. Similarly, for a woman to reach her destination she needs to exit the stereotypical sphere of influence around her and design her trajectory to make that giant leap” says Nandini Harinath, Deputy Operations Director, MOM.

This fiery spirit pervades all the interviewees who shared their experiences in the book. Most of them had great family support, with family members being extremely proud of the work they were doing. Many juggled their roles as caretakers and scientists beautifully by harnessing support from different sources and being organised and extremely determined. But what really stood out for me was the fact that they treated their ambitions seriously and their role as women in science was always about something bigger than themselves.

There are also some insights into other lesser known, but quite important missions conducted by ISRO as well. For example, the Space Capsule Recovery Experiment, Chandraayan-1, ISRO’s work in other fields and places such as Antarctica and so on. It is nice to read about other missions as well. ISRO works on so many things such as storm alerts and distress alerts for fishermen for instance. It is not all about space. And women play a key role in many of these missions.

Who should read this book?

So ,who should read this book? This book is quite accessible to those ages 12 and above. There are two aspects here. The first relates to workings of ISRO in general and the MOM mission in particular. Anyone with a keen interest in science and space will find this an insightful book. However, the other angle is related to gender and space, specifically in India. It reveals what it has taken for women to make a mark in space research, and what are the challenges still unfolding. I think this is a great read from the gender perspective as well, and will offer useful cues to those interested in the realm of women and work.

And as we hope that there will be a day when gender becomes irrelevant to the choice of a profession, till such a day should come, we need books that inspire women to forge ahead in uncharted and challenging paths, and to applaud those who have already done so!

For me, reading this book became less about ISRO and more about these women who had the universe as their workplace. Well, here’s an inspiring read that shows how even sky is NOT the limit!

Read your way to fitness with The Shivfit Way