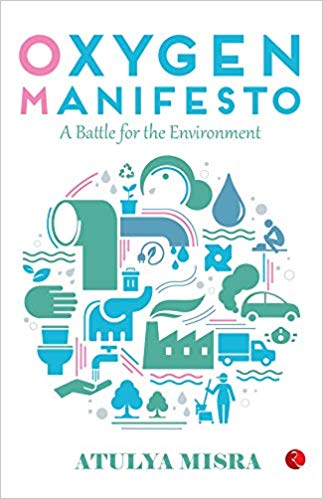 Oxygen Manifesto is a work of fiction but it carries within it the call and cry of an entire population who seeks better lives and demands that from their democratically elected leaders.

“The trees, forests and streams were shrinking fast. There was barely any vegetation to hold the soil on hilly slopes. Fresh water became a scarcity. Other than crows, all other birds had flown off to greener habitations. Fields produced less and demanded more labour and inputs. The birds no longer sang. Instead of tall mighty trees, one could only see lantana and other weeds growing in the valley. There was no sound of cicadas in the evenings. Flowers stopped blooming and moneys and rabbits stood driven out. The sun came down hard and the rain clouds retracted away and afar. Moreh looked like a concrete jungle as the hillside was dotted with ugly electric poles, even uglier wires and serpentine tarred roads”

Isn’t this scene so familiar? Scenes of development often jostle for space with scenes of sustaining and protecting heritage, especially our natural heritage. On one hand there are the people, and on the other there is the government. We have seen often that governments can fail people. However, this book describes scenarios in which people decide not to fail themselves. Two common people rise up to a veritable challenge.

Oxygen Manifesto presents a story that is a confluence of three journeys. First, there is Thatha. Thatha is a nobody- an unknown citizen. But, he relentlessly works for a cause- of restoring the natural vegetation of his beloved Manipur. Then, there is Ravi, an IAS officer posted first at Manipur, and then elsewhere. And lastly, there is the narrator, who looks for the backstory between these two elusive individuals. What have Ravi and Thatha done that is so praiseworthy? And if they have done something great, why are they not in the limelight?

The narrative is simple and the book is easy to read. The story hops between the tale of Thatha and that of Ravi interspersed with the efforts of the narrator to bring the two stories together.

The reader gets an insight into the indigenous tribal culture and the diversity thereof in Manipur. We get a sense of all that is lost in name of development. It moves across the length and breath of India, pointing out that the place might be different but the story is the same. The book is an eye opener of sorts. You see it unfold before you. Social disharmony, insurgency. Ecological havoc…how all this can be caused by insensitivity at the top level. And yet, there is hope in form of people like Ravi and Thatha who work for a brighter future.

The book also weaves in the actual components of a manifesto that truly addresses the need of the hour rather than target numbers for vote banks. In the midst of the election season, here is a book that beholds a manifesto of another kind. It gives a window to the readers to understand and identify what they really need from political parties. It also gives hope that change can be made by individuals and it can have a ripple effect.

It is surprising that reading this book immediately reminds me of another non-fiction book that I read recently- Delusional Politics, which talks about how incorrect decisions by people in power have devastating ling term implications. To me, Oxygen Manifesto, albeit a work of fiction (with elements of non-fiction weaved in), shows a ray of hope!

See the smells of Mumbai…..Matsyagandha by Gopal MS

The Shooting Star by Shivya Nath is a debut travel memoir that speaks about the power of authentic travel, and its far-reaching personal impact