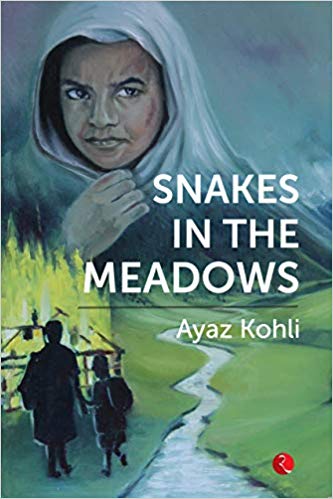 Snakes In The Meadows is Ayaz Kohli’s debut novel (published by Rupa Publications) and what a punch it packs! The title aptly summarizes how evil in the form of terrorists comes and destroys the peace of simple locals of a beautiful hilly village who only want to live a decent life. When all is lost they rise up like the proverbial phoenix to obliterate the enemy!

Snakes In the Meadows is a gut-wrenching story of how the locals of a hilly village, Pathri Aali, in India occupied Kashmir are brought to their knees by the mujahideen. As if it is not enough that they are having difficulties surviving in a harsh environment, most of the males of the village have travelled to the Middle East for jobs and the women and children are left to fend for themselves. The mujahideen prey on them mercilessly as if the locals are not humans at all. Some of the scenes where youngsters are assaulted brings tears to one’s eyes.

The men working abroad were kept in the dark lest they return and are killed by the mujahideen. The straw that breaks the camel’s back is an unspeakable crime committed against a child which forces the protagonist, Ashwar, to write a scathing letter to the men asking them to return and fight.

Thus begins the plan to annihilate the mujahideen from the valley. The villagers run from pillar to post to get help in this endeavour. The ignorance and outright refusal to help from certain Government quarters is disheartening. The peripheral characters though help to draw a contrast between the frog-in-the-well outlook of the ongoing activities in Pathri Aali to what is happening in the rest of the country. Also, the personalities and experiences of the other characters enhance the story – be it through their villainous roles, shades of grey or humanity and sacrifices.

If you are like me about reflecting back on what lesson I take away from every book, the valour and fortitude of the villagers is truly inspiring. It makes one ruminate about the frivolous complaints and excuses one uses daily. It makes us grateful for all that we have – the most important being identity, respect and honour! Snakes In The Meadows is a book that will open your eyes to a world of courage and resilience!

Sheela Raval and the underworld diaries

Colaba- The Diamond at the tip of Mumbai by Shabnam Minwalla…The history of Colaba…and the present.