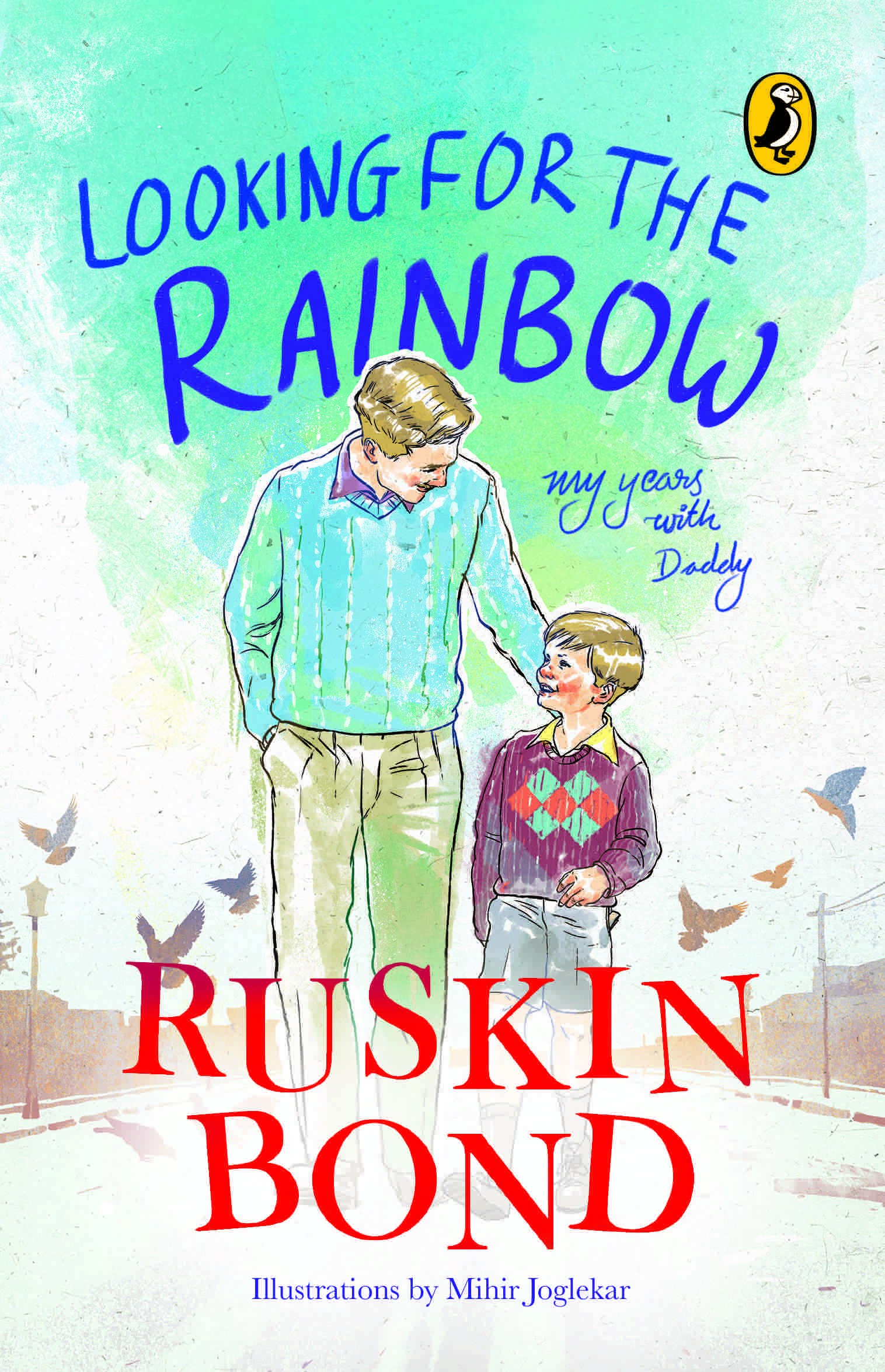 Ruskin Bond is undoubtedly a writer equally loved by children and adults. The award winning author has delighted generations of readers with his simple and moving stories set in the beautiful mountain environs of North India. As he turns 83 today, he is all set to delight his fans with two new books- one for children and the other for devout bibliophiles.

Looking for the Rainbow

“Looking for the Rainbow”, his book for his young fans, chronicles two precious years of his life spent with his father, who clearly remains to be the most influential person in his world, even as he crosses his eighties. He mentions in the beginning, that contrary to popular opinion, his memory has not faded with age. He remembers his childhood days very clearly.

Through the eyes of the child Bond, the book reveals a very simple and timeless parenting lesson:

Not many fathers are capable of tenderness towards their children. They are usually too busy ‘earning a living for the family’—or that’s the excuse! So I was lucky to have a father who gave me nearly all his spare time, who brought me books, took me for walks, shared his interests with me and held my hand in the dark.

Ruskin Bond’s writing is so simple that it almost makes one feel as if he is chatting with you over a cup of tea. The book starts off when Bond was an eight-year-old boy, delighting in the fact that he would be taking a whole year off from school. He describes his adventures, which of course, have a healthy dose of animal and plant life woven in.

Bond describes the period of pre-independence India and through the memoir he recreates India of the 1940s through the eyes of a child. Of course, the global context of the world wars also echoes in the narrative. Little things like how difficult it was to obtain a tin of processed cheese in the war days, will attune the current generation of readers to the life of a boarding school boy during the time of war.

Who would have thought there was a war going on in Europe, Asia, North Africa and the Pacific? Who would have thought India would be an independent and sovereign nation in two or three years’ time? There I was, enjoying chocolate milkshakes, while British and Indian civilians were trudging through the jungles of Burma to escape the Japanese advance.

The book also glides through his boarding school days. Another feature, always present in Bond’s books is the overwhelming presence of nature. Harmless trysts with animals and trees, and the innocent experiences of the natural world is also something that young children will relate to.

Pain and humour can be strange companions, but a stalwart like Ruskin Bond makes them come together with relative ease. He talks about the ‘painful’ memories in a matter-of-fact way with a dose of the quintessential Bond humour. Take for instance the lines below where he describes his parents’ separation:

It was 1942, the middle of World War II, and my parents too had been at war with each other. They had, in fact, separated, and my mother was about to marry again.

However, when he describes his father’s death, it is in tender touching words. It is honest, but not at all bitter.

What shines through most strongly in the book is the simple pleasures of life that the father and son share- looking at stamps, going for ice-cream or going to see movies at the local theatre. Despite the absence of his father for most part of the year, he holds fond memories of the man because of a strong bond that surpassed physical presence. He recalls the postcards that his father sent to him, often scribbled with recommendations of books to read, which he did read in due course.

Wonderful illustrations by Mihir Joglekar accompany the book. They liven up the words and indeed, are quite commendable. This is one of those books where the illustrations and the text work seamlessly and harmoniously with each other.

Despite the sad event of losing his father, the narrative ends on a positive note.

We are on our way—here we go!

Rolling round the world, looking for the rainbow

We know we’re going to find some day!’

Looking for the Rainbow encapsulates two beautiful years’ worth of memories. These are memories about father who left an indelible impression on his young son. Now, at the age of 83, they remain tender moments which stand out clearly in his mind and heart.

It may be a children’s book, but adults will also connect with it in a deep way as well. This book is a birthday gift that Ruskin Bond fans will surely cherish for years to come!

Read this story for more information on the series.

The Tiger of the River by Adrian Pinder, illustrated by Maya Ramaswamy