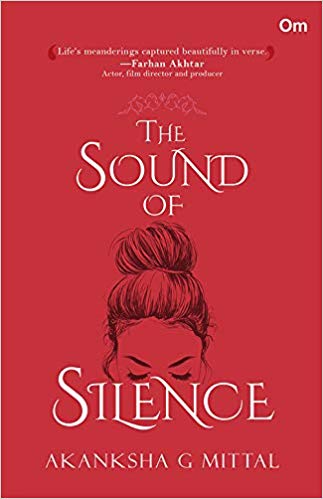 “Sometimes I am caught between poetry and prose, like two lovers I can’t decide between. Prose says to me, ‘Let’s build something long and lasting’. Poetry takes my hand, and whispers, ‘Come with me, let’s get lost for a while’.”

Akanksha Mittal’s debut collection of poems perfectly embodies this delicate task of poetry. The Sound of Silence will take you on the meandering journey of a beleaguered heart, exploring love, loss, longing and melancholy that leaves you tingling with emotions. The poems attempt to portray an honest look at relationships and all the highs and lows that come with it.

Mittal’s collection spans the full spectrum of emotions from a sweet teenage crush to the unbearable pain of your first heartbreak, from the irresistible pull of desire to the cruel torture of unrequited love.

Her deep love for nature is apparent in the monochrome sketches accompanying some of the poems. While most verses speak of romantic connections, Mittal beautifully weaves webs of connectivity with the entire universe which is the centre of all creation. Elements of nature such as fire, wind, earth seamlessly combine with celestial elements like stars, constellations, the sun and moon. These elements are beautifully illustrated and immerse the reader into Mittal’s world.

‘Like God had to create the sky after crafting the ground,

Once He had crafted the lips, He had to invent sound.

And when He formed the clouds, He had to make it rain too,

I too had to be crafted because He had already created you.’

Although there is a central theme running through the book, it might have been better if the author had divided the book into parts so that the reader is aware when the tone changes. While the language used in the book is simple and easy to understand, the themes explored are quite mature and are apt for those who have been through the complex tussle of love.

The Sound of Silence subtly evokes deep buried emotions. Mittal’s poems illustrate that in love and relationships, a lot remains unsaid and undefined. What can’t find its way into words, will find a way to flow out. Let it!

“A sandcastle I sure was,

Hopelessly in love with the wave,

But the end was worth it,

For I had the entire ocean as my grave”

Title: The Sound of Silence

The Jewel of Vishnu: Chronicles of a Lost Continent by R.K.Singh