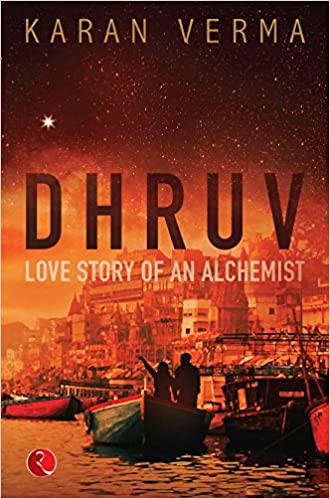 Benaras, the holy city by the holiest river Ganga, becomes the colourful background against which the story of DHRUV (written by Karan Verma and published by Rupa Publications) unfolds. According to Hindu mythology, Dhruv was a prince blessed by none other than Lord Vishnu himself, who declared that the pole star would be named after him. This is the star that shines the brightest.

The novel begins in the midst of bloody riots that change the course of Dhruv’s life. The protagonist is born on a fateful day, against all odds, defying destiny herself. A priest proclaims that the child will change the course of destiny and go on to make an impression on the whole of mankind. Does this prophecy turn true? Does Dhruv live up to it? What does destiny have in store for him?

Dhruv is a beautifully told tale of a boy’s journey in life. We follow the protagonist through different stages of his life as he takes on challenges and happy moments with equal aplomb and with an enviable serenity. The reader feels his intense pain and revels in his happiness. As the reader journeys with Dhruv, there is also a sense of self awakening. The twists and turns in the story keeps the reader hooked throughout. The story moves towards a surprising but highly gratifying end!

Bookedforlife in conversation with author Karan Verma, whose debut novel was Jack and Master. As a public speaker, Karan has mentored thousands of students, corporates and businesses across the globe. We talk about his continued tryst with fiction, which is also a vehicle for him to share his message…

This novel is probably more personal than Jack and Master, and also carries with it a different kind of intensity. Let us into the genesis of the plot.

I agree with you that ‘DHRUV’ is far more intense and personal than ‘Jack & Master’.  The idea of ‘DHRUV’ came to my mind at a time, when I was going through the toughest phase of my life.  A bad relationship and an act of betrayal by an uncle, who was a partner in our family business had shaken me completely. It was a difficult time, but I stood up and rose to the challenge as I’ve always believed that the darkest nights produce the brightest stars. ‘DHRUV’ for me is an ode to the spirit of every individual who has been through a difficult time and chosen to shine through it.

The plot has quite a lot to keep us wondering what happens next. However, for me, the turn of events towards the end was really surprising, and unexpected. Did you always conceptualise this in that manner?

I’m happy to know that the book and especially the end has received a tremendous response. I had always conceptualized it in that manner. I was very clear in my head that Dhruv’s journey and Guruji’s journey always had to reach a spiritual and emotional summit. Writing and describing this journey was a daunting task because it was a journey both on the outside and within. It was a tough book to write and it did take an emotional toll on me as well. I remember being overwhelmed with emotion, the day I wrote the last page. I was tense, excited, emotional, all at the same time!

As a public speaker, one would generally expect nonfiction and self-help books coming from you! What draws you towards fiction?

At my core, I am a story-teller who is deeply in love with the craft. I love creating characters whether it was Jack, Master, Sakshi or this time when it has been Dhruv, Emma.  I also love creating my own world where my characters chart their own journeys in life. They sing, they dance, they make you laugh or cry, they even inspire you. It is this joy of creating my world that draws me to fiction. Even as a kid, I was fascinated with this craft and then I worked tirelessly hard on it. Even, as a public speaker, I believe that I’m a storyteller first and a motivator later. Nothing inspires more than a spirited story well-told.

The notion of alchemy has been explored by many books, and you have given it your independent twist. What was the thought process behind having the protagonist belong to a family of alchemists?

The word ‘alchemist’ had always fascinated me. I was amazed by the fact that not many understood the word and its symbolism.

One of the best compliments that I received for DHRUV was – ‘Thanks for telling us what alchemy truly means. For me, Banaras is a land of mysticism, prophecies and alchemy. As I was writing the plot of ‘DHRUV’, I thought it would do justice if ‘DHRUV’, my protagonist is destined to be an alchemist. For me, alchemy was always symbolic of what it takes to transform ordinary lead to extraordinary gold. When I go around giving talks across the country, I ask people: ‘Who is the alchemist in your life’? Who is the person that changed you for the better? In my case, it’s my mother who inspired and changed me for the better. She is the alchemist of my life. I would want to be an alchemist- an agent of change for someone else.

What do you want the reader to take away from Dhruv?

Gratitude! Life is all about smelling the roses and being grateful for your blessings because there is so much to lose. Be grateful and be an alchemist for someone who’s life you can change. It is an empowering and deeply gratifying feeling.

What are your favourite works of fiction? What do you like to read?

Ayn Rand’s ‘Fountainhead’ has always been one of my favourite reads. I remain a Potterhead and love J K Rowling. I also love ‘The Song of Ice and Fire’.  I basically read across genres and themes.

Share with us a bit of your writing process. As readers it is fascinating to get a sneak peek into the writing journey! Does it begin with the plot or the character? Does the story unfold as you write or you have it conceptualised beforehand?

It is a magical process, I tell you. There’s a madness, insanity but then there is a method to the madness. For me, it’s all about the plot. A central theme comes to my mind and it keeps growing with every passing day until there comes a time when I have to write it down. The plot and the protagonist pretty much come to my mind together but the plot is far more important. The ending is very important. If I don’t have a proper ending in mind, I would not attempt it and so the story in my case is conceptualized beforehand. Writing a book is a huge decision for me, as I believe that I’m pretty much putting out a part of me, a part of me that’ll perhaps never come back. So even if I think of 10 stories, I would only write the one that I’m truly hungry to share with the world.

The Liberated Manager by Stuart Drew: Drawing on your Personal Share Price