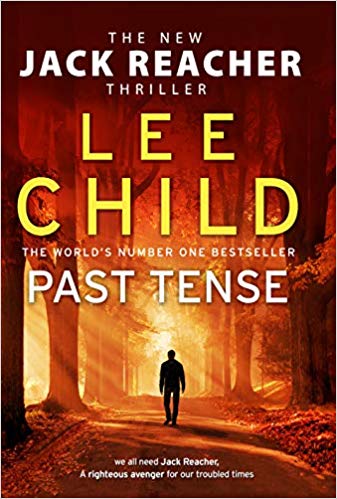 When I picked up the copy of Past Tense by Lee Child I was a stranger to Jack Reacher. I had read about the fictional hero of course and his legendary popularity, but never really devoured a novel which had him in action. But, once you enter the world of Reacher, there’s no going back.

The book starts off with two parallel stories. Jack Reacher is looking at a long journey which he intends to complete on foot and hitching rides on the way. He plans to follow a diagonal path across the US, from Maine to San Diego. But, as luck would have it, he comes across the proverbial crossroads, literally, when he finds himself on a path where he has to make a choice. One road leads to another leg of his destination. The other leads to Laconia- the place where Reacher’s father was born. Curious about his father’s origins and thereby his own, he takes the detour.

On the other hand, Patty Sundstrom and her boyfriend Shorty Fleck are making a long car journey all the way from Canada. They get stuck at a motel in the middle of nowhere, somewhere near Laconia.

Strange things happen to both Reacher and Patty. Reacher discovers that no trace of his family exists and there are clear gaps in what he thinks he knows about his past. Patty instinctively feels something is not correct but can’t pinpoint to any specific thing. Why does the door of their room suddenly get locked? Why won’t their car start again?

The suspense starts right from the beginning. Lee Child is a master at his game. He unveils the sinister events bit by bit. Somewhere these two stories meet…It does not take long to understand why Reacher is the literary hero that he is. Lee Child has crafted this character with care! What appealed to me the most about his Jack Reacher was his acute sense of observation, leading him to look at little instances and regular situations of life with a different eye. Clearly, things are not always what they apparently seem to be

Past Tense is undoubtedly a page turner…one of those thrillers that you just don’t want to put down till they are over! If you are already a Jack Reacher fan, the book will live up to your expectations. If you’re new to him, welcome to the huge fan base! Past Tense by Lee Child is another Jack Reacher adventure you must not miss!

The Little Book of Encouragement from his holiness the Dalai Lama, edited by Renuka Singh