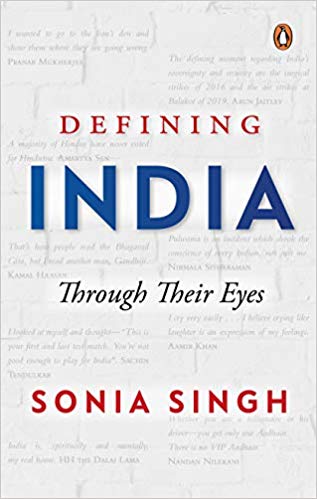 In a nutshell, Defining India Through Their Eyes by Sonia Singh (published by Penguin) has conversations with illustrious personalities whose own personal stories have been interwoven with the India narrative. As citizens of a country, when we look back at our lives, and we compare this journey with that of our country we will invariably notice that somewhere these two stories intersect. The personal becomes the political. And, the political becomes the personal.

It is one such journey that Sonia Singh is taking the reader through. Except, this is not really about one individual. It is about a diverse range of personalities who look at India through the unique spectrum of their experiences.

I think that as Indians, engaging in this narrative with the people who have had some role, however big or minuscule in shaping India, is indeed enlightening.

For me, these conversations threw some some interesting behind the scenes information. Reading about Arun Jaitley’s experiences in prison on being arrested during the emergency for instance was quite fascinating. The interview with Dalai Lama threw up wonderful glimpses of how different Prime Ministers of India, right from Pandit Nehru to Narendra Modi have walked the tightrope with China on the issue of Tibet. Raghuram Rajan’s insights into the workings of bureaucracy were an interesting aspect to the chapter that obviously talked about economics largely. Aruna Roy’s activism is inspiring in how it led to a defining moment for the people in form of the RTI act.

Another point I must mention is the selection of personalities. They are so diverse and that really makes it interesting ! You have opposing personalities – on one hand there is Pranab Mukherjee who stood with Indira Gandhi during the Emergency and on the other there is Arun Jaitley who was imprisoned during that time. Personalities like Aamir Khan and Kamal Hassan from the film industry and sports stars like Sania Mirza and Sachin Tendulkar add to this wonderful curated mix of people that includes several more luminaries.

All interviews stand out strongly on their own. Depending on each reader, of course, some of these conversations will resonate more strongly than others.

For me, one of the best interviews was one with our current Finance Minister, who earlier headed the Defense Ministry. We can’t really talk about defining moments in India without reference to some bold decisions taken on the Indian response to terrorism. The interview with Nirmala Sitharaman, who at the time of the publication of the book was the Defence Minister, is very fiery and very inspirational. A woman helming one of the most crucial ministries (both then as Defense and now as the Finance Minister), I felt her interview was quite interesting.

Another one I particularly enjoyed was the conversation with Nandan Nilekani. The reasons are obvious- conceiving Aadhar under one government and implementation of the same under another. What were the challenges that the corporate honcho faced in the corridors of power in Delhi? Aadhar has redefined identity for Indians and has been a crucial milestone in nation building.

Just when you think that it cannot get better and more candid than this, you turn the page and there pops another equally fiery personality.

The simple purpose of any conversation is to be enriched by it. And, by talking to these diverse minds about defining moments in their lives, and how these moments intersect with the story of India is inspiring.

Defining India Through their Eyes by Sonia Singh brings forward interesting perspectives on India. Some conversations give you a background to behind the scenes politics. Some show how decisions taken at top levels have connotations spread over decades. Some show the power of a single idea. But all of them have something enriching to offer!

Intelligent Fanatics of India by Rohit Potti and Pooja Bhula