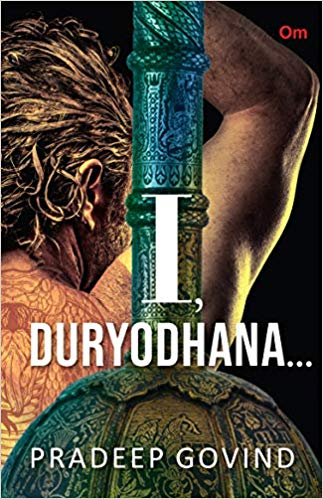 “Until lions have their own historians, histories of the hunt will glorify the hunter,” goes a popular adage. Yes, history does sing the victor’s song. But thankfully, there are many authors and thinkers who often wonder, what if the story was different if told by another character. There are a few good retellings and reimagining of the Mahabharata. Would the Mahabharata narrative have been any different if Duryodhana narrated the story? I, Duryodhana by Pradeep Govind (published by Om Books International) explores this fascinating angle.

In conversation with Pradeep Govind, Bookedforlife tries to get inside the mind of the author who has taken up the challenging task of looking at the Mahabharata through Duryodhana’s eyes…

There have been several fictional retellings of the Mahabharata, through different perspectives. What made you choose Duryodhana as your protagonist?

I am of the conviction that history generally tends to favor the victors over time. When you read or listen to the Mahabharata with an unbiased mind that is open to the possibility of the epic being a fantasized narration of real historical events rather than just a creative work of fiction, you will find several areas where you are tempted to raise questions in favour of Duryodhana. Besides, as a character, he is perhaps the only one in the epic who had clarity as to the stand he took. Just about everyone else, be it Radheya, Bheeshma or even Vaasudeva, had their feet in two boats at the same time at some point or the other. The story of the Mahabharata could still have happened without any of the other central characters…but not without Duryodhana.

Take us through the kind of research you undertook in order to write this book.

There was not much conscious, objective research so to speak save for some trivia. Unfortunately, there is no authentic original manuscript available for reference…the one supposedly written down by Lord Ganesha. The Mahabharata has always been a fascinating subject for me and I’ve been exposed to so many versions of the stories and sub plots in it in various formats right from comics, books, translations, online articles and so on and of course not to forget the mega TV serial. They have all been helpful in my work. I’ve also listened to many fascinating discourses and talks on the Mahabharata.  There was one particular early morning daily talk show in Malayalam called “Bharatadarshanam” that I was particularly hooked on to. It was conducted by the late Professor Thuravur Vishwambaran and ran for 10 years and over 3000 episodes on Amrita TV.

Do you think the Mahabharata is relevant today? And if yes, how?

The Mahabharata has all time relevance but it depends on how one comprehends the subtle messages embedded in the epic in just about every canto and chapter. It may never be relevant if we read it like we read a magazine on a lazy Sunday afternoon. The reading should be given due gravitas and the words subject to reflection and analysis.

Following from the earlier question, how do you think that the retellings of the Mahabharata from varied points of view are relevant today? Your book is also a part of this highly current upcoming genre of mythological retellings.

This depends on the objective of the retelling. If it is being used to showcase the creative imagination of the author, then its relevance should stay in the literary world. On the other hand, if it is to also evoke some genuine empathy for the character and, thereby bring in a better understanding of the human mind under different circumstances, then that understanding would come to define our responses to people and situations in everyday life and make things better and more acceptable.

The irony of the language and the sharp satire is not lost on the reader! Was this something you were consciously trying to attain?

Was I? Not sure about this…. maybe at some level. But if you’ve noticed it, then it’s satisfying.

Shakuni is a character much loathed and the story makes his role prominent in steering the direction that Duryodhana veers towards. There is a school of thought portraying the war as one between two masterminds- Vasudeva and Shakuni. Do you subscribe to that view?

There are many schools of thought when it comes to the Mahabharata and each convincing in its own right. That is the beauty of this monster of an epic which will throw something new at you every time you read it. Coming to the question on Vasudeva and Shakuni, as much as one could think on those lines about the war, in the 10th chapter of the Gita, Vaasudeva reveals to Arjuna that among the deceitful practices, is the ‘gambling’. So now where does that leave us with respect to his equation with Shakuni?

You have stuck to the details and facts passed on across generations. However, there are occasions when you have given a different version of facts. For example, in the book Duryodhana does not know about the burning of the wax palace. I am curious to know about the strategy you employed. Did you think things through from the point of view of Duryodhana and then kind of imagined what could have occurred?

That’s a very pertinent question and I’m so glad you’ve noticed. I have taken care not to deviate from the traditional narrations unless it appeals to logic. So, the first thing I did was to not consider the Mahabharata as Vyasa’s creation but as his narration of historical incidents. That makes him vulnerable to distorting truth to favour the victors as well. How else could you describe Duryodhana’s braying at the time of his birth and the wise men of court counselling the king to put him to death? When you look at it that way, it gives you the courage and license to question the genuineness of a lot of things narrated. For example, I felt that the accidental burning of a woman and five men in the house of wax and them being mistaken for Kunti and her sons seemed too contrived and convenient a narration to believe. In the march of time, many such things get distorted or brushed under the carpet to suit the victor’s narrative. That is why Duryodhana held on to his life to make sure that he died in the favourable arms of history. (Though eventually that was not the case.)

What do you want your readers to take away from this book?

Apart from an enjoyable read worth the time and money, if I, Duryodhana helps in making the reader always search his mind and question the thoughts and details that he has been trained to ignore and makes him a little more open minded in judgement, it then would have served the spirit behind it’s writing.

The Rainbow Acres by Simrita Dhir

Mohini the Enchantress by Anuja Chandramouli