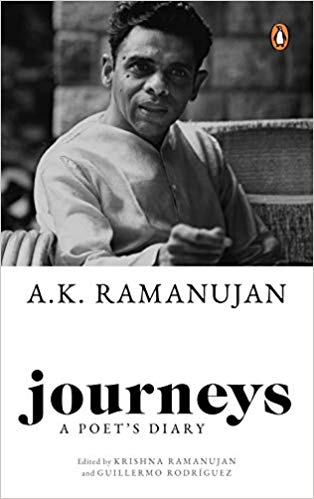 “I have been writing a journal for some time, chiefly notes to myself, with no pretensions to style or scholarship, but as explorations, passages from one thought or feeling to another. I needed these notes to clear my seeing, settle my roving thoughts, curiously, restlessly, without regard to any discipline (In both senses of the word). I needed them even to form my thoughts, and to see what I was looking at, to listen to what I was hearing. I am publishing them now, making them public, so that the private may find a place in a larger discussion, just as the larger discussions entered my private journal”- A.K. Ramanujan

What would a poet’s diary look like? Behind all those poems that have enthralled the world, what did he think or know that informed his work? What did he feel? For a literature lover, it is almost voyeuristic to peek into the diary of literary figures. No wonder that publications of the personal journals of literary stalwarts have often been big projects and well-received ones at that!

One such treasure trove of materials lay in the Special Collections Research Centre at the University of Chicago. This material is now beautifully represented in Journeys – A Poet’s Diary published by Penguin. Edited by Krishna Ramanujan and Guillermo Rodriguez, the book takes the reader through the inner world of A.K. Ramanujan. The delightful variety of materials included in this book include unpublished prose (diaries, journals, dreams, short stories, notes, letters), unpublished poetry (drafts as well as polished pieces) and his published work. One can only imagine the herculean task of choosing what to include and giving it a coherent shape! However, the richness that we can find in such miscellaneous stuff is hard to ignore, and rightly so. In addition to reading the diary notes, the Editors Notes at the beginning of each section are quite useful in filling in some important background and context details.

The magic of the process

If there are rough sketches and notes in this book, there are also drafts of poems and final published versions. The gamut of material in essence provides a peek into the unique craft of Ramanujan. These were the experiences and nuggets that chronicled his life, and in a way, made his poetry happen.

There are statements of self-doubt; lines from other poets and writers he admired ; snippets of conversations with people he met along his travels; records of interactions with varied intellectuals, poets and artists; records of encounters with everyday people; detailed descriptions of dreams and much more. One of the interesting records in the diaries has to do with his one-time experience of a hallucinogen mescalin.

Also included here are notes he wrote on a journey by sea from Bombay to New York. Both in actuality and metaphorically it was a journey that opened his mind and exposed him to a world beyond the familiar. Our travels define us and as one browses through his sea-notes it provides a reflection not only of his innermost thoughts, but also gives fleeting glimpses of the times he lived in, when the world was not hyper connected as it is today.

I also feel that the journey somehow evoked the poet in him to write poetry in prose, as illustrated by these lines: “Afloat. With almost no past, and no near future but the sea, just afloat in the decks of the present”

As readers we know Ramanujan as a successful poet. But there was a huge part of him riddled in self-doubt and that comes across, almost offering a peek into his mind. What also amazes me is his capacity for introspection. I think this is the defining factor that shows how well he could understand the human mind. For example, while writing in his diary about the fact that he did not get a job for a position he applied for, he muses, “The necessity of avoiding disappointment is greater for my mind than the necessity of a better job”.

He analysed and introspected a lot, as can be gauged by postscripts or notes. For example, he writes, “My five fruitful years at Belgaum taught me how much can be done in a day if one lived in the Present Discontinuous and plucked every moment”.

For me, the best sections of the book were ones in which he becomes his best “introspective self” and analyses all his actions, his behaviours and above all, his work. For instance, he talks about how he has honed his craft only by imitation, and has preferred imitation rather than initiating things. However, his imitation is also of a different kind. “I’ve perhaps always looked at myself looking at things. This offers a curious detachment, but enfeebles experience”. He is aware of this tendency of his to analyse his own self, as he admits, “I exhausted myself in self-analysis, lived in a kind of maudlin modesty, filled diaries with the subtleties of my innermost self”.

In the entries curated in the book, the reader also gets a sense of how Ramanujan reread old entries and used this experience to take a critical look at how his journey had been. Two decades before he passed away, the diary entries become shorter but purposeful. As a reader it is interesting to observe these subtle and gradual evolutions of a diarist.

A lot of entries naturally deal with musings on his work- the technicalities of writing, the fear of not being able to say anything new, the nuances of language, poetry and its ideocracies, rewriting and so on. His tryst with training in psychoanalysis reflects in the many dreams he has chronicled in the diary as well, especially in the later years.

Reading through this tome will help the reader “experience the full magic of his poetic art”. And, as Krishna Ramanujan puts it in the introduction, “If immortality exists- as John Keats and William Shakespeare have claimed- it can be found in the words the dead leave behind.” Journeys – A Poet’s Diary will appeal to literature students, readers who love the  genre of memoirs and diary writing, as well as those with a keen interest in the poetry of A.K. Ramanujan.

Thrive in Retirement by Eric Thurman