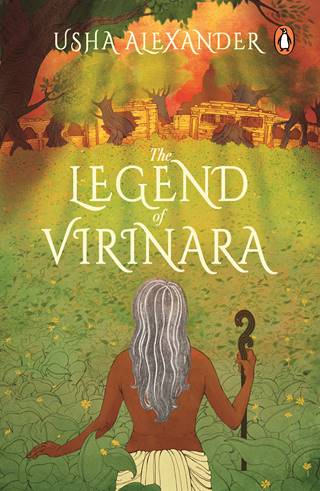 The Legend of Virinara by Usha Alexander seems to be a parable of modern times in its concerns and themes though it is set in an ancient world where the monarch, Raja Vijay rules the mighty state Virinara. The powerful king expands his kingdom, eating into the surrounding forests. However, the forest dwellers are not ones to be subdued. They respond with an act of terror. The kingdom, that has been peaceful so far, is shaken.

Peace and compromise is the only way out. Raja Vijay’s beloved sister Shanti ventures deep into the forest alone to seek a solution. But stories of power and politics are never so simple. She falls in love with the forest warrior Narun. A peacemaker between the two rivals, she seeks a nonviolent path to resolving the conflict. Does she succeed in establishing peace or are humans ever destined for war and the havoc that ensues?

The story is narrated by Shanti, in a flashback. Her half sibling who has renounced worldly life to become a monk writes the story as she narrates it. The narrative moves back and forth from the present to past thus adding interesting layers to the tale.

The fast paced story moves towards its conclusion with twists and turns that keep the reader anticipating what the next turn of events would be. The politics of the royalty, the basic difference between the lives of the modern settled folk and the nomads, the hierarchical nature of society, the corrupting nature of power, putting individual animosities above common good- all these are the factors that come in the way of ‘diplomatic conversations’ and peaceful solutions to the problem.

A matter of conflict

We are in a world filled with conflicts of all kinds. There is an internal conflict between who we wish to be and who we believe we have to become for the sake of duty. The characters undergo these complex internal conflicts. And then, there is an external conflict that we are all familiar with. The conflict between the forest dwellers and the town dwellers who seek to expand into the forest forms an important theme as well. The conflicting interests between groups, the role of diplomacy, tact and violence in this saga makes it a story that is so relevant to our times despite being set in the past.

The Legend of Virinara is set in times when the role and status of women was relegated to childbearing and running the household. Against this background, the women of the Royal household who are integral to the story are strong and they try and rise above the ‘status’ accorded to them by society. Eelar-amma, the kings step mother, is a wise and just woman who uses her influence for the good of all. The protagonist Shanti, is a brave woman who steers the course of her own life despite trying factors around her.

The Legend of Virinara clearly has a deep philosophical message about life and the times we live in. It also shows the importance of forming your own philosophies rather than being brainwashed by prevailing thoughts. As Shanti says in the book of her knowledge and growth, “I sampled them all: Mahavira, Carvaka, other teachers from distant lands- even obscure cults and unsung teachers, whose names have long since dropped from our discourses. I devoted myself finally to none of them. I found each of them incomplete. I walk my own way. And that’s what I encourage in the youths who come to learn from me,”

In that sense the book portrays that “There are different ways of understanding and knowing and not every story is true in the same way,”

It also illuminates how individual equations interfere with larger scheme of things. As Shanti encapsulates her life in words, her discussions with the monk reveal deep philosophies that seek to find a solution to the problems that mankind has always faced- problems of conflict and violence.

Perhaps the best way to describe The Legend of Virinara is in these words- “It’s your story and it is our story. A true story of our world. Perhaps someone will find a reflection of themselves and their times in your words,”.

Title: The Legend of Virinara