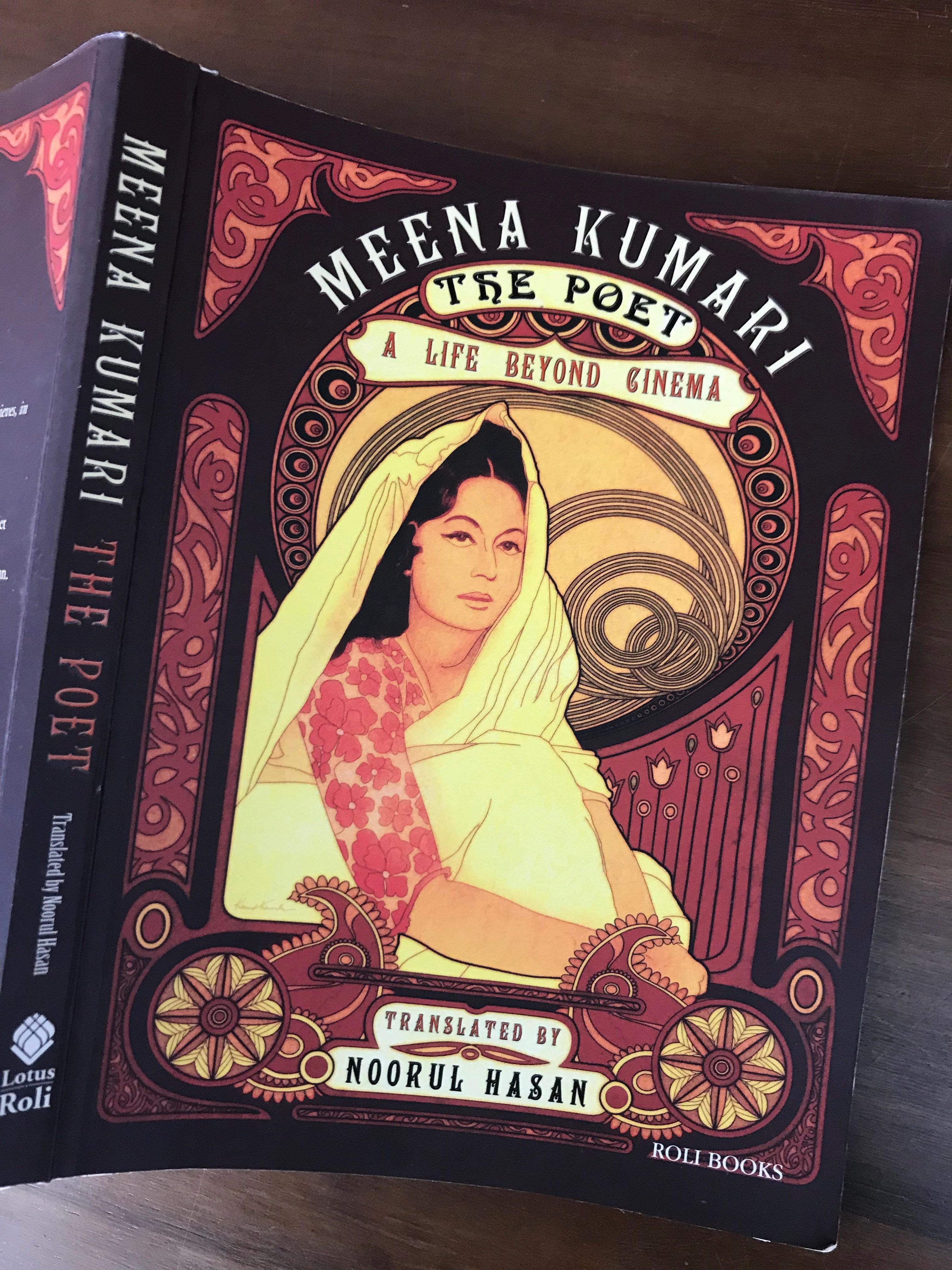 She ruled the golden age of Hindi Cinema and in her short life, left a deep impact on the world of filmmaking. We know her as Meena Kumari- the Actress, the Diva, the Idol, the Tragedy Queen, the Legend. But, we have not yet seen her avatar as Meena Kumari the Poet. Not many know that she had a way with words, and she used the power of the pen to express her innermost thoughts and feelings. Meena Kumari’s poetry has been overshadowed by her role as an actress…so far that is.

In Meena Kumari: The Poet, A Life Beyond Cinema (Published by Roli Books), Noorul Hasan brings to the limelight this unseen side of the actress’s personality. What had been hidden from the public eye, or rather, overshadowed by her cinematic achievements, now comes to the forefront. Hasan’s translations of Meena Kumari’s poetry presents her in a new light.

Meena Kumari’s poetry has a very distinct voice. The actress comes across as a versatile and sensitive woman who used words to voice her despair and to come to terms with life- and with herself.

The book has her original poems in Urdu as well as the English translations side-by-side. Reading both together magically transforms and enhances the appreciation of her poetry. This also illuminates the beauty and precision of the English translations. Translation, by its very nature, is a herculean task. One can translate words from one language to another. But, what about the feeling and imagery? This makes translation of poetry all the more challenging. And, if the poetess happens to be a legend of sorts the pressure only increases! But, Hasan has surpassed these challenges and brought forth an honest depiction of Meena Kumari’s poetry.

Her poetry reflects her inner turmoil. There is a sense of pain, and a sense of antagonism against society. It seems as if she found catharsis in this act of writing.

My hands are empty, I’ve nothing at all

Except a bitter taste in the mouth of my heart.

I had an impressive array of dreams

But found nothing save grief and despair

Even that hope began to breathe its last

Without which all was lost.

The poems are very rich in metaphor and imagery. It is almost as if the reader can visualise what she is talking about. In that sense her words evoke vivid images in the mind of the reader.

The buds of memories

And in the night’s unfathomable dark

Slowly draw the veil from their faces

Love is also a recurrent theme in her poems. She rejoices in the feeling of being in love when it is fresh and new. But she does not shy of exploring love that fades away…love that hurts and love that betrays. She also talks about the despair of separation and the yearning to meet again.

I feel it bursting

From each pore of my being

Her poems also turn philosophical at times, exploring the many questions that life poses, and deliberating on existential questions.

Only man can bring himself

(unmindful of their ephemeral life)

are not so despondent

as to kill themselves

The book has a few hauntingly beautiful images of Meena Kumari as well. In addition to the poems, which form the crux of the book, there are a few other features which highlight the life of the actress. Philip Bounds and Daisy Hasan’s discussion of “Meena Kumari as a critic of popular culture” provide a new lens through which one can view Meena Kumari’s poetry. It also features couple of interesting journalistic pieces from a very old book about the actress. These pieces comprise of a fitting tribute to the actress by Naushad Ali, the reflections of a journalist on multiple meetings with the actress and a surprising piece penned by Meena Kumari herself.

The book will be of interest to those with a love for poetry as well as fans of the actress. The poems hold strong by themselves. But, in view of the fact that they were written by a legend one can’t help but relate it to her life and the broader context of the Hindi cinematic industry of the times.

That Meena Kumari was typecast as the tragedy queen is well-known. But, I think her poetry elevated her above all that. As one nears the end of the book, one is left with the feeling that for her, “Love was a dream” (to put it in the words of one of the titles in the collection). One is left with the sensuality of her words and the richness of the images her poetry evokes. Maybe, the best way to conclude is with these lines from her poems, which somehow crystalize the essence of her poetry and her life…

Life is a scattered tale of grief

And my story is nearing its end.

Long after Meena Kumari has gone, she still remains an enigma- much loved, and still ruling the hearts of people. In the same manner, long after you have read Meena Kumari’s poetry, it’s sensuality, flair and delicacy will continue to woo you!

Title: Meena Kumari: The Poet. A Life Beyond Cinema.

Rita and Abhijit Kothari talk about bringing back the magic of KM Munshi.