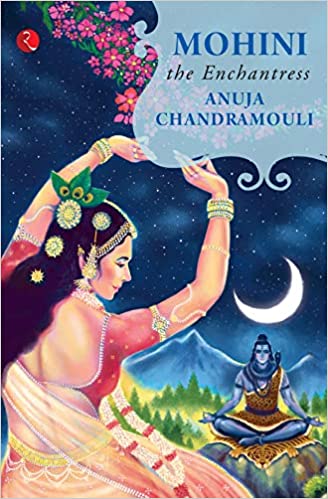 Mohini, the only female avatar of Vishnu, is the ultimate femme fatale. She is the enchantress and no one can escape the magic she weaves. She maddens lovers, often leading them to their doom. People revere her as a Goddess and there are tales galore of her adventures. In Mohini the Enchantress by Anuja Chandramouli, we hear a refreshing point of view. She talks of events that have unfolded in mythology.

Published by Rupa Publications and written in hauntingly enchanting language, Mohini – the book works its magic on the reader. What is it in this narrative that casts a spell on the reader? Is it the rich and colourful language that is quite in sync with the theme of enchantment and seduction? Or is it the deep, eternal carefree voice of Mohini herself? Is it the poetic text that wafts across as you read and draws you in the story? Or is it the strong feminist voice that emerges out of the tales that normally carry the male viewpoint? Is it the striking relevance of the stories to our lives today? Maybe it is all of these factors. All these points form an enthralling concoction, that makes Mohini so appealing to readers.

“Some of us prefer the gentle and tolerant moonbeams to the harsh glare of the judgmental sun”, says Mohini as she narrates the series of events and weaves them into a single tapestry that will reveal itself in the end. What stood out most strongly for me was that the woman’s point of view that makes the reader look at mythological events from a different angle. As Mohini puts it, “Because you just know when it comes to certain tall tales, the narrator belongs to the male of the species, with an extremely limited imagination and little or no understanding of the feminine psyche”.

There are stories within stories. This is bound to be in a tale springing from the rich trove of mythological stories. Though one perceives her as a beautiful seductive temptress, Mohini defies stereotypes associated with a temptress. She is grappling with higher philosophical thoughts, she has her own take on life. She is fiercely independent in her views and actions. She is in a position to choose and makes no qualms about it. She is empowered.

Through Mohini’s narrations one gets a different view of the stories of mythology. For instance, one always associates the devas with good and the asuras with bad. But, there is never black or white in life, is there? There are always shades of grey and there are nuances in stories that are wiped out because we are so fast to classify things and events as Good or Bad, Pure or Impure, Right or Wrong. Through the narrative one can sense a changing order. Here, there is respect for shades of grey. This is an underlying and simmering feature that is always present as you read the story. There is also a lot of humour that ones sees interwoven with the language. For example, Indra throwing a ‘celestial tantrum’ is sure to evoke a smile!

I love the strong line of feminism and criticism of patriarchy that comes out naturally in the book. “If there was one thing they couldn’t tolerate in a female even if she was a powerful goddess, it was a selfish love of the self over service to others” she says. This is in a reference to Goddess Ganga, who asserts her will in a specific situation in the story. There are instances when the treatment of women in the mythological retellings seems shockingly similar to our realities. For instance, when the mighty Indra worked at slandering the reputation of the bold Kavvya, who was fiercely independent in supporting the asuras (and rightly so), it seems strangely familiar. The violation of Tara, who seeks to break away from a confining and abusive marriage reflects the treatment of women. However, her ultimate redemption gives hope for a better world.

If you are familiar with Indian mythology, you may recognize characters who fleet in and out as Mohini narrates her tale. It might make you appreciate the story with an additional layer of understanding and another reference point. You may just be able to draw more juice from it. However, even if you’re not well versed in these backstories, Mohini’s narration will give you all the context needed.

Mohini retells and relooks at mythological stories and events from her own point of view which is refreshing and different. I think that Mohini will appeal to you if you are enchanted by poetic language. if you love to drown yourself in the beauty of words. It will appeal to those who grapple with larger questions about life.

I think one of the best chapters of the book is the one that describes reaching the ‘Amrut’ the elixir of immortality. This chapter is mystical and lyrical, exposing fallacies and weaknesses as well as indomitable strength of the spirit. The much-coveted nectar of immortality, the Amrut, becomes a point of contention. The already warring devas and asuras each seek it for immortality.

The heady lure for immortality manifests itself even today, when we strive for power, and when we strive for that eternity. This is a struggle that plays again and again. It has been played in the past. It continues to play all over again as human beings, countries, companies, armies and what not strife with each other for a mere sip of that “Amrut” whose definition changes with the times. However, the truth remains the same.

Defining India Through their eyes by Sonia Singh