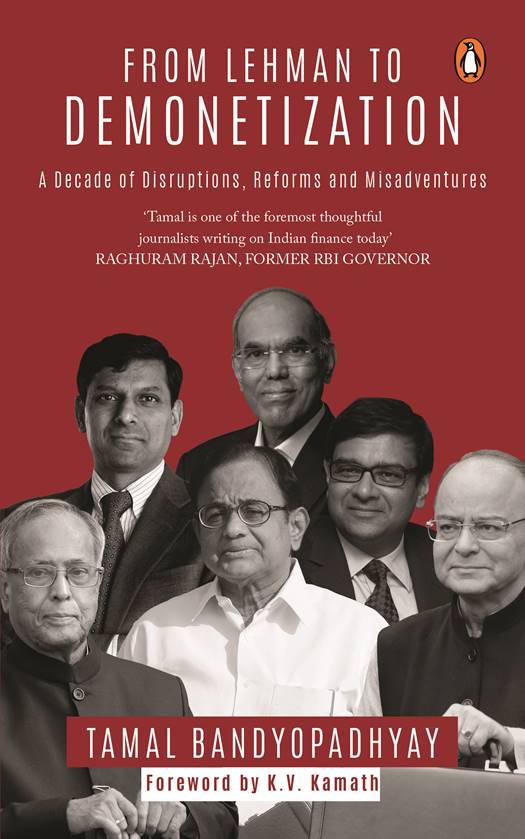 Not many books look at the Indian banking system from a multiple lens. From Lehman to Demonetization by Tamal Bandyopadhyay is an attempt to chronicle the tumultuous financial period between two very significant events – the collapse of Lehman Brothers in 2008, and the demonetization exercise in India in 2016. These events were crucial in their own right. The Lehman Brothers collapse led to a series of chain reactions that affected economies world over. Demonetization has also dominated most of the talk since the past year.

The book chronicles issues that have dominated these years, especially in context of Indian banking system.  Quite expectedly, the author has given due coverage to exploring the rise in the debt of Indian banks.

“Some public sector banks have been driving down the slow lane to death, loaded with bad assets. Many of the loans that had been restructured following the Lehman collapse continued to haunt them but they were in a denial mode till Rajan drove the first-of-its-kind asset quality review(AQR) for these banks. When it came to exposing their bad loans, they had been doing a belly dance but the AQR forced them to do a striptease”

It also looks at other issues that plague the banking sector in India. At the same time, it studies the positive aspects of the Indian banking industry that shielded Indian economy from the Lehman crash. Right from the relative orthodoxy and conservative approach of the RBI, to the times when one could say that the RBI has become ‘more adventurous’, the book chronicles all.

Tamal has handpicked the essays in the book from his database of about 600 well researched stories that have appeared primarily in Mint, the popular business weekly, over the last decade. One of the advantages of this is that each story is crisp and comprehensive. Since these were published stories intended for the general reader, the language is simple and jargon free.

The benefits of hindsight

Tamal’s curatorial eye has looked at his decade long analysis and got it all together. The articles have a very analytical flavour and each group of articles is tied by a comprehensive introduction.

The second part of the book has essays and interviews of key individuals, men and women, who have played a role in the world of Indian finance and banking. The list includes regulators, commercial bankers, professionals, entrepreneurs, investment bankers and so on. Some of the names featured here are Deepak Parekh, K.V.Kamath, Arundhati Bhattacharya, Chanda Kocchar, Aditya Puri, Shikha Sharma, Raghuram Rajan, U.K.Sinha and Viral Acharya, amongst others.

While a book that talks about the complexities and the myriad issues of the finance and banking system could be labelled as a concentrated read, this one is quite accessible to readers.

Based on his intense research and writing over the past decade Tamal uses the information in the book or turn soothsayer and also predict the scenario after a decade, which should also be quite interesting for readers.

By 2025, at least a few banks will consider themselves as technology companies and feel tempted to say, ‘We also do banking’.

Tamal recognises the aspect of diversity and polarisation in India and how this will play out in banking.

The challenge before us is to merge India and Bharat on the banking turf. Yes, only technology can achieve that, but it is too ambitious to expect that to happen by 2025.

The reader need not go through the entire book in a set order. He or she can refer to sections and aspects that they have specific interest in. It would be of interest to students and professionals, to get a picture of Indian economy and the Indian banking system from 2008 to 2016, against the backdrop of a challenging and changing global context.

In all, the book gives a detailed and deeply analytical picture of the analysis of the Indian banking system and a decade in banking that was very important worldwide.

From Lehman to Demonetization by Tamal Bandyopadhyay, 2017

Rukshana Eisa’s The Golden Code explains all the etiquette rules that you need to know!