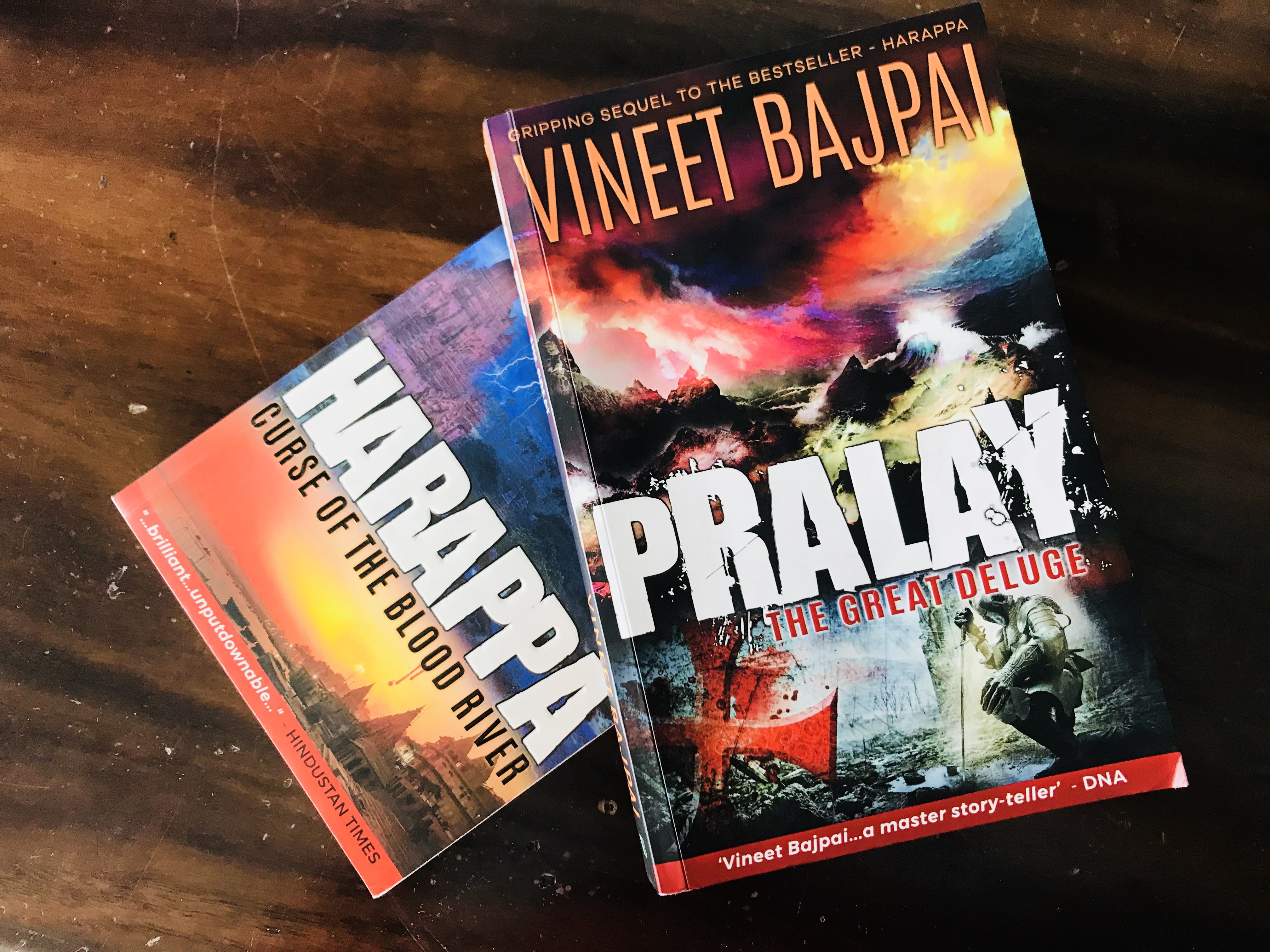 There comes a time in the history of mankind when a cleansing of humanity is called for. Vineet Bajpai’s novel Pralay-The Great Deluge, the sequel to the first novel Harappa- the Curse of the blood River, tells the story of a chain of events that led to the destruction of mankind in a great deluge as well as an opportunity to redeem the human race.

In the prequel Harappa, the mighty and godly king of the ancient civilisation, Vivasvan Pujari, is betrayed by a dear friend. In the ensuing events he loses his beloved wife, he believes that he has lost his son Manu, and he faces severe humiliation in front of his own people. Yet, there are those who would do anything for their devta. He is rescued but these events have left him a changed man with a changed heart.

In his desire for revenge he unleashes a chain of events that threaten to destroy Harappa, and his future lineage as well. It is up to his son Manu to redeem mankind.

The story of Harappa has a strong link to the story of Pralay- The Great Deluge. In the latter, the young and dashing Vidyut Shashtri is set to take over the mantle from his grandfather, Dwarka Shashtri, the powerful Brahmin. The year is 2017, but events that occur at this time have deep links to the past. Vidyut has to fulfil his destiny not only by freeing his lineage from a terrible curse, but also by saving the whole of mankind.

Pralay- The Great Deluge, just like its predecessor, swings between historical periods. The story unravels across time. Love, power, violence, betrayal- this story has all the elements of an epic saga.

Events that happened simultaneously at two different locations in 1700 BCE at Harappa, are intricately connected with a story that unfolds in 2017 in Banaras. Yet, there is something that takes form in 325 AD, in a place that is modern Turkey, that also changes the course of events.

In a sense this sweeping canvas of eons allows the story to play out in epic proportions. As a reader of fantasy fiction, I love interconnections that span the length and breadth of time. This also makes the reading smoother and propels the book faster, since the reader is constantly kept interested in this switchover between different eras.

Pralay- The Great Deluge also represents a kind of intersection and interaction of Western and Eastern worlds. The onset of pralay where Manu builds an arc to save mankind from a flooded disaster, echoes the legend of Noah’s Ark. There are references to exorcism and how the sadhus of Benares and the practitioners in the West somewhere and somehow converge.

Some human emotions and tendencies remain constant across ages. The intoxicating desire for power, the greed for supremacy and the inherent violence that is a part of human nature is seen across all of time. It is this aspect of humanity that leads to sin and pain. Whether it was the sins committed in Harappa that led to a drastic turn of events, or emperor Constantine’s vision which actually proved counterintuitive or a new world order that caused much destruction in modern times, three parallel stories tell the tale of humanity at its worst.

And yet, our ancient texts dictate that even mere mortals can rise to the ranks of devtas or the gods. Whether it was Manu who played saviour to the continuation of life after the great deluge, or Vidyut’s ancestor who cautioned Constantine against his crazy notions or the last devta Vidyut who is destined to be the saviour of the world against dark forces, the book reiterates that the redemption of mankind lies in the hands of man himself!

What I loved the most is the fact that three stories set in different eras in time unfolded with their parallel plot lines and reached a scene that leaves us longing for more! “What happens next?’is what the reader really wants to know as the book takes you at a fast pace towards the end, though there is no conclusion yet.

The soon-to-come third book, sequel to Pralay- The Great Deluge, titled Kashi, The Secret of the Black Temple will provide the readers with the end of the story. Or, maybe not. Because as the book says: “The wheel of time was always turning, presenting human souls with the same trials. Kaalchakra was ceaseless”!

This book review is a part of “The Readers Comsos Book Review Program and Blog Tours. For details log on to thereaderscosmos.blogspot.in

The Lord and Master of Gujarat by K. M. Munshi- a timeless and thrilling historical romance