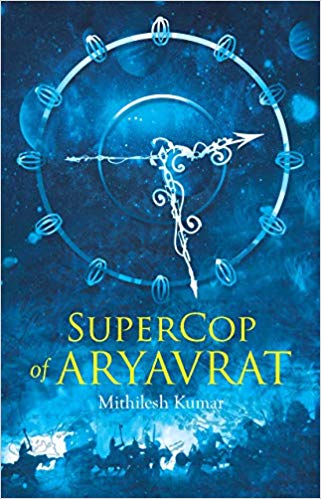 Perhaps the greatest legacy of Lord Krishna is the Bhagavad Gita, often called upon as the epitome of the perfect guide to life. Through the story of the Mahabharata, we also know a little about the story of Krishna. But a lot remains untold, and Supercop of Aryavrat by Mithilesh Kumar takes on the massive challenge of narrating the events that spanned Krishna’s life.

Our rich Indian mythological heritage is replete with literary gems both from the ancient times to modern texts, interpretations and translations. Mithilesh Kumar has dipped into this treasure trove of information and facts to flesh out stories of the man who handled the greatest wars with panache. We hear the story of the master strategist whose lessons still hold true centuries later.

The novel begins with Krishna musing over the past, with a tinge of regret. Cautionary words from his brother Balrama flash across his mind- Do you think you are the SuperCop of Aryavrat? This supposed jibe opens up the floodgates of the past and the reader is led into the story of Krishna. Through narrations and flashbacks Krishna views his life, right from the events surrounding his birth and the imprisonment of his parents by Kansa, his maternal uncle, to the happenings of the war of Kurukshetra, through his involvement in the various historical events that occurred. The narrative is a mix of the first-person narrative by Krishna himself, and the third person narrator, who fills in the background information. Together, both these narratives take the story forward.

What I appreciate about this book is the point of view. Most of us know about the story of the Mahabharata. However, hearing the tale from the point of view of Krishna gives another perspective.

We live in a world where we have started to look for voices that represent multiple truths and different perspectives. So far, mythological stories have fed us with a one dimensional viewpoint that has coloured our perceptions. It is heartening to note that writers are trying to seek out how the same story would have been told from another person’s point of view. Being an ardent fan of the genre, I have read other books that talk about the Mahabharata from different perspectives. However, this is the first time that we are shown events from Krishna’s point of view.

If you are familiar with the story, the book will really tease you into opening up your mind to different possibilities. Was Yudhishthira really the gem he was made out to be? Was Pootana the demoness that we are told she is? All the ‘magical’ explanations given for some events, could there have been alternative explanations for the same? Could Krishna have avoided the war? How did his strategy work in determining the events that preceded the war of Kurukshetra?

The author has been true to the storyline in terms of the actual events that occurred and the chronology of the same. But the change comes in the reasoning behind the same. What actually happens to cause these events may not necessarily coincide with our version of things! For example, when Arjun wins Draupadi’s hand in marriage and the Pandavas fool Kunti by telling her they have got bhiksha, she asks the brothers to divide it amongst themselves. Hence the sharing of Draupadi between the Pandavas. However, was there an ulterior motive of Yudhishthira behind this? This is just one example but the book is filled with numerous instances where explanations behind events are completely turned over.

Krishna is portrayed as a master strategist which is true! His thinking and planning and his creative strategizing add another element of interest to the book.

An additional feature that really comes across very strongly in the book is what I would call, painting the picture of Krishna as a wonderful human being and not a divine god. This is a key achievement of the book. We see Krishna as a thinking breathing soul who uses his sharp mind to maneuver through life.

For those who do not have any background knowledge on the Mahabharata, this book will still be interesting to read. The author has a firm grip on the narrative and the story flows smoothly and crisply into a saga filled with all the elements of an interesting novel.

The book ends with the Great War of Kurukshetra of course. However, the focus is on the life of Krishna and the actual war (including the parts that constitute the Bhagavad Gita) is but a mere chapter. This is a refreshing take on the life of Krishna and a powerful novel that puts its own spin on of the most popular epics in the world!  SuperCop of Aryavrat by Mithilesh Kumar dips into ancient tales to flesh out a saga that is relevant in the contemporary context!

If you wish to read this book on kindle, please click here.