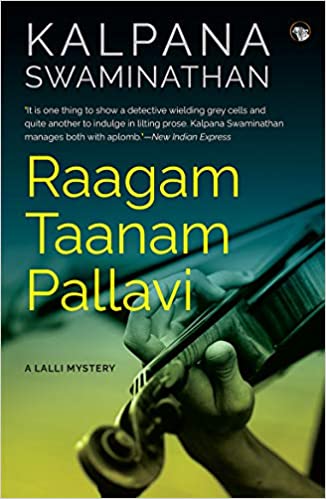 A Lalli mystery is always worth your precious time. It is very tempting to compare Kalpana Swaminathan’s detective Lalli with Agatha Christie’s Miss Marple. But, let’s resist that for now. Instead, let’s look at Lalli in her own right. She may have grey hair and her simple demure deceives the onlooker. However, the sharp-witted no-nonsense detective with a background in the police force, is one of the most endearing fictional detectives in Indian literature.

With Raagam Taanam Pallavi, (Speaking Tiger) Kalpana Swaminathan brings Lalli at a crossroad. The detective faces a different kind of dilemma. To be direct- Lalli suspects that she herself may be a murderer, in a crime long forgotten. Or maybe, long repressed. Her only clue is a piece of music. Thus begins another intriguing mystery.

When one reads detective fiction, one expects the use of grey cells and a deep psychological insight into the characters and events. Swaminathan carries out this task well, and just like any good whodunnit, the Lalli mystery has all the makings of a page turner. But, what really sets this book apart is the prose that merges elements of Carnatic music and myths, gently interweaving them into the plot and the narrative. It is in this nuance that Raagam Taanam Pallavi really rises beyond all expectations.

In this specific story, one murder connects to another. Surprisingly, it has a connection to Lalli’s repressed memory of a murder she might have committed. A man is dead at the house of Subbu Bhagavathar. But, getting to the murderer is a journey that involves the myth of Murugan, the six headed God. It takes Lalli back to Kanyakumari, at a time where fate interweaved and journeys crossed.

Lalli’s team includes Savio, Sita (who narrates the story), Shukla (providing a lot of comic relief), Shaktivel and Dr. Q who are well carved in their roles. The other supporting characters play their part to perfection. For me, the evocative language almost made me feel like I was witnessing the story unfurl right in my mind’s eye.

This was my first Lalli mystery, and I’m hooked. Another recent mystery in the series was Murder in Seven Acts: Lalli Mysteries, which were short stories. I realize that there are many more Lalli stories. Now I know what my next set of reads would be!

The life changing magic of nutrition