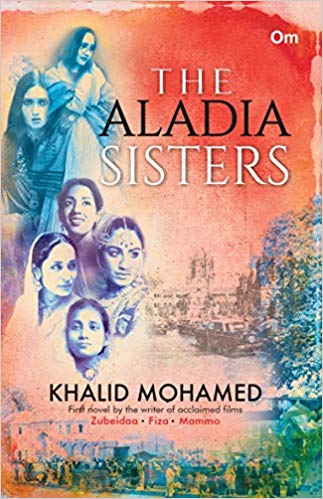 The Aladia Sisters (published by Om Books International) is Khalid Mohamed’s debut novel. True to form, the story has bold and unapologetic female characters at its core. The story follows the life of six sisters and their families from humble beginnings in a small town in pre-independent India.

The six Aladia sisters are born in a small town Qalayat, to a Muslim couple hoping for a son. Once their brother Murad is born, the sisters loose what little importance they had in their parents’ lives. This alienates them completely from their existing patriarchal lifestyle and they run away from home in search of a better living. Thus, begins the life of struggle and independent survival.

Their plight comes to light when the grandson of one of the sister’s, a journalist, decides to write a book about the sisters. Their falsehoods are uncovered one by one. The three elder sisters, thought to be the leaders are unveiled. The lies and secrets that they had woven about their lives to make themselves sound like the victim, rich or happy start crumbling when their own children or grandchildren start talking. Their rose-tinted views are questioned. Sadly, one saintly sister’s death is confirmed and the youngest sisters, twins, are finally found.

What resonates with the reader is the harsh realities of life presented in a bare-knuckled manner. Does everyone become selfish when it is a matter of their own flesh and blood against other close relatives?  Does everyone try to present themselves in the most flattering manner and internalise the excuses?  Since these types of behaviours are typical human actions, the brash speech and tone of the sisters is refreshing and sometimes graphic but true to life.

Even before the book is finished, the writing convinces one not to judge people as everyone is fighting their own battles in the way they know best. What does not go down well is the way sex is overstated and hackneyed. It takes away rather than add to the book. This seems like one of those rare books on which a movie made would be surely be impactful. And since we do know that Khalid Mohamed is credited for some fantastic and critically acclaimed films like Mammo, Sardari Begum, Zubeidaa, Fiza, Tehzeeb and Silsiilay….we are waiting for another strong film rendition!

The Little Book of Everything by Ruskin Bond

The Liberated Manager by Stuart Drew: Drawing on your Personal Share Price