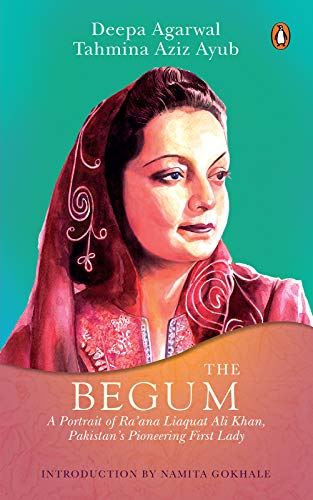 Her life can be seen through two lenses- Pre and Post partition. The life of Ra’ana Liaquat Ali Khan, wife of the first Prime Minister of Pakistan, began in Pre-Independence India. A participant in the freedom movement, her achievements and dedicated work for the causes she supported, continued with vigour when she became the first lady.

A remarkable life. Two narratives woven together to create a tapestry of the life and times of one exceptional woman. The first narrative is born in India, and the other, in Pakistan. These two strings make the story of her life in the The Begum – A portrait of Ra’ana Liaquat Ali Khan, Pakistan’s Pioneering First Lady by Deepa Agarwal and Tahmina Aziz Ayub

Deepa Agarwal, based in India accesses some family documents and background material to paint a portrait of Irene who later converted into Islam and became Begum Ra’ana Liaquat Ali Khan. Agarwal does not present a biography. She presents a story, and that is what makes it so interesting. While the story of the Begum is always at the core, there are many interesting background tales that add flavour. I found the story of her grandfather’s conversion to Christianity in the orthodox Kumaon, quite fascinating. In a sense, through Ra’ana’s story, we get a painted picture of pre-partition India.

Begum Ra’ana Liaquat Khan was born Irene Ruth Margaret Pant in 1905. She had a Brahmin lineage and was a practicing Christian till 1933, when she converted to Islam after her marriage. she was fiercely independent and extremely devoted to the cause of welfare in Pakistan, that rightly earned her the title of “Mother of Pakistan”.

Her fascinating life could be seen from two different perspectives, and this is exactly what the book sets out to do. Deepa Agarwal goes into deep anecdotal research that illuminates the personality of this extraordinary woman, till she left India and settled forever in Pakistan, while co-writer Tahmina Aziz Ayub writes about Ra’ana Liaquat Ali Khan as a great humanitarian and activist in Pakistan. This collaborative work converges into one book. Together, it brings alive this alluring personality.

The first part of The Begum established what a prolific person Ra’ana was. However, the readers’ admiration for the fiery First Lady will only go on to increase in the second part of the book. It beautifully chronicles how she picked up pieces of her life together after the terrible event of her husband’s assassination. Her activities towards betterment of the women of Pakistan continued relentlessly. She took up diplomatic assignments abroad and worked for her country even when she was living abroad. She proved to be a great example of an emancipated woman, who continues to be a role model even today.

Once in Pakistan, she continued her activities especially in the realms of women and social welfare. She was known to be far-sighted and very devoted to the cause of women empowerment. The culmination of these efforts saw the creation and rise of the All Pakistan Women’s Association (APWA) that continues its activities till date. Ayub continues the narrative from the other side of the border.

« Within days of their arrival in Karachi, Liaquat Ali was asked by Jinnah to take over as Prime Minister of the new State of Pakistan. Since Ra’ana had already been his full-time political partner during their early struggles, she was fully equipped to step into the shoes of the first lady of the country »

Ayub paints a poignant picture of Ra’ana’s resilience and continued devotion to Pakistan even after her husband’s death. The book chronicles the manner by which she worked relentlessly and mobilised the support for the causes she so much believed in. Ra’ana’s contribution towards the emancipation of Pakistani women will be remembered as a lasting and irreplaceable legacy.

For me, one of the unexpected delights of this book was knowing about the background of the times she was born in. Deepa Agarwal evokes the ethos of the the times through her authentic research presented almost like a story. I think the idea of this background sketching, and a detailed one at that, is to show how she was a product of her life experiences and her family situation.

It also places in context her gradual involvement with the independence movement, moving on to support for the two-nation theory, meeting her husband and ultimately moving to Pakistan as the First Lady.

One also gets a background perspective of the genesis of the Two-nation theory even before India got independence. What comes through in this book is the fact that no one realised the extent of bloodshed and the agonising events that the partition would lead to.

That said, what did Ra’ana think about the partition and development of Pakistan thereof, in retrospection? How did the Pakistan she lived in differ from the Pakistan she dreamt of ? These answers are gently woven into the narrative.

The Begum is a very inspiring book in that it tells the story of a truly wonderful woman who braved all odds and set an example of dedication and service to her country and also for for women in her country and beyond.

Read the book on Kindle: