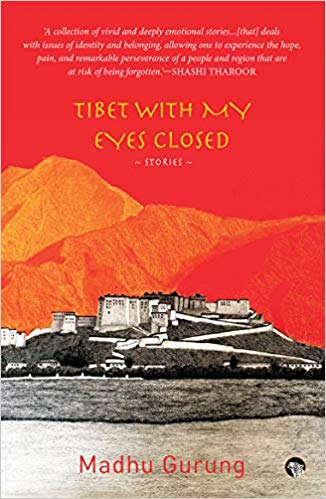 Many a time we use the terms, ‘Freedom, Homeland, Identity’, freely and take them for granted. However, in Tibet with my Eyes Closed, a book by Madhu Gurung, published by Speaking Tiger, we find that the peace-loving Tibetans have been waiting and yearning for autonomy from Chinese occupation rule for the last 60 years. In the spirit of the thought that ‘Everyone has a story to tell!’, the book highlights voices from Tibet.

Madhu Gurung in ‘Tibet with my Eyes Closed’, has written eleven well-researched pieces. Part-fiction part-reality, there is a kaleidoscope of heart-warming stories. They bring forth the internal strife that the common Tibetans face every other day. On one side we have the older generation who are living in the Indian settlements holding on to their traditional beliefs and yearning to return to their Tibet. On the other, we have the younger lot adopting Indian culture and lifestyle to maintain a balance. Poignant and emotional each story leaves a mark. These stories of ordinary Tibetans are of loss, pain, separation, emptiness and coming together. There’s a hope in the hearts of young and old Tibetans that one day their homeland will be free from persecution of Chinese Communist rule.

In 1949, the People’s Liberation Army of China entered the Amdo, Kham and U-Tsang (seat of the Dalai Lama’s power) region of Tibet. Slowly and steadily they started attacking and oppressing the locals. His Holiness the 14th Dalai Lama who is the Tibetan political and spiritual leader, with his family and closest aides had to escape the Norbulingla Palace in 1959 with the Chushi Gangdruk Warriors, a guerrilla group and take refuge in India. Around 80,000 Tibetans were also forced to flee Tibet in a mass exodus and live in 14 different settlements all over India as refugees. To escape rule by Chinese occupation which could result in death or persecution they chose to do so.

Each of the 11 stories in the book epitomizes one core element of the Tibetan   prayer flag -space, wind, water, fire and earth. The flag of 5 different colours are synonymous with Buddhism and the belief is that the flags promote peace, compassion, strength and wisdom. Each colour represents 5 elements. Blue symbolizes the sky and space. White symbolizes the air and wind. Red symbolizes fire. Green symbolizes water and Yellow symbolizes the water. Each of these 11 stories have elements of that colour woven in their background.

Glimpses from the book….

BLUE-SKY: Sangey lives in Darjeeling with his father, wife and children but he keeps on having a recurring dream again and again since the age of 5 of escaping his village of Zinda in Tibet from Chinese oppression with his father, aunt and uncle Penda Rinpoche but leaving behind his mother, young brother and grandparents. Darjeeling is home now and they live the Indian life but the spark in his father’s eyes is gone and empty. The search is always on for a word from his Aamo (mother) who they fear is dead in Tibet. Until one day….

In Jampaling we have Yangkyi, an 88-year-old inmate who lives with 153 other elderly at the Jampaling Elders home in McLeod Ganj, Himachal Pradesh. She leads a simple routine at the home with other old, frail inmates and yearns for a word from her son who she has not met for nearly fifty years. And when one day she receives a call from him a floodgate of tears roll out and we get to know about the life that they have left behind.

WHITE –AIR: Mariko is the poignant story of young Tenzin Ugen from McLeod Ganj, who first spends a few years training to be a monk but later on transforms himself to become the first Tibetan transgender and becomes a dancer, role model and style icon for Tibetan youngsters who are afraid to come out of the closet .

RED-FIRE: In The Medal, we have 10 year old Tsering all excited to discover his Popa-La (grandfather), Jayang Chhering, who was in the army where he and other comrades trained to become the first airborne Tibetan force of the 22 Establishment. But they got to fight their first war against Pakistan for India in 1971 and being a covert force, they could not be publicly recognized. For a child a medal is a shiny object seen in awe but for soldier it is a gift of a different kind.

Madhu Gurung has worked as a journalist and her first book, The Keeper of Memories, is a historical book about Gorkhas which was shortlisted for the Shakti Bhat First Book Award.

I loved reading ‘Tibet with My Eyes Closed’ by Gurung because I got to know about the gentle peace-loving believers of Buddhism. I love reading about people and their cultures and the book touched me emotionally. Each story has substance and a strong theme of want of an identity and homeland. While reading I could feel their pain, a search for their roots and a hope that they are not forgotten by the world. I would have liked the author to include a geographical map of Tibet for easy understanding of the region. However, somewhere, somehow, these voices from Tibet have made a place in my heart!

If you are keen on stories from Tibet, here is some additional reading. Read about BookWorm – A tiny but famous Mcleod Ganj Bookshop. For introducing this topic to children, you may refer to Portraits of Exile by Aaniya Asrani, that explores the stories of Tibetan refugees through picture books.

Title :Tibet With My Eyes Closed