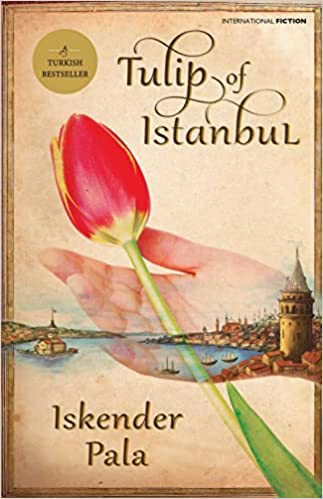 Literary translations provide a window into other cultures and other thoughts. A veritable translation within the realm of historical fiction brings with it added layers and nuances. Tulip of Istanbul by Turkish author Iskender Pala (translated by Ruth Whitehouse and published by Niyogi Books) depicts the Ottoman Empire’s most glorious times- the Tulip Age.

The protagonist, a young man, Falco, finds his beautiful wife murdered on their wedding night. The only clue he has to lead him to the murderer is a tulip bulb that he found in her palm. He is arrested for her murder. He not only has to prove himself innocent, but also find the murderer. There is another layer to the story- his secret identity! He is a prince, a sultan’s son, who has grown up outside the palace.

Parallel to the murder mystery is the story of the revolt of the Turkish revolt and the deposition of Sultan Ahmet III. The chapters are short and each chapter is a question that probes the narrative forward. It is through sixty-six questions and their answers that the novel moves forth. The narrative shifts between points of view and that makes for interesting reading.

However, it is in the historical and cultural details that the novel truly trumps. Life within royal palaces and the luxurious decadence; the famed dervish lodges, horticultural secrets about growing exclusive tulips, the torture techniques and devises in the prisons; the treatment of the mentally unstable in the asylum, the secret lives of the royalty; the corruption of the officials; scheming conversations in coffee houses and visits to the hamams; the rise of gangsters and birth of a revolution, all these elements get together and weave an interesting tapestry.

Iskender Pala brings out the social and political picture of Istanbul at a glorious time in its history, and still manages a social and political commentary whilst keeping the reader guessing about the identity of the murderer. The novel was originally published in Turkish and titled Katre-i Matem.

This translation, by Ruth Whitehouse brings the richness of the work to English readers. World literature, especially when accessed through translations, bring in the richness of diverse human experience to readers, just like the Tulip of Istanbul!

Millennials in the workplace? How to Recruit, Incentivize and Retain Millennials by Dheeraj Sharma should be your go-to guide!