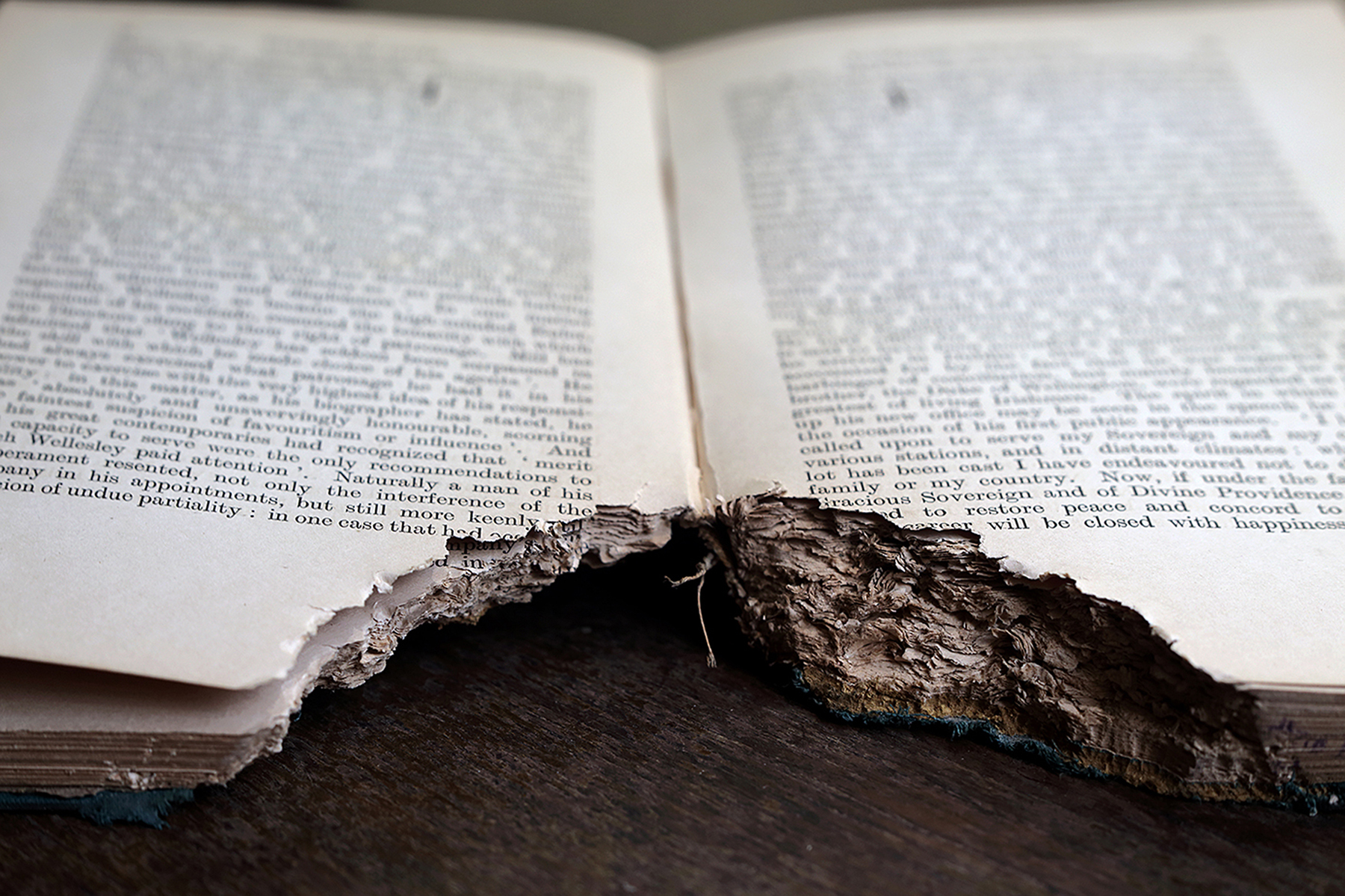 ‘In the City: A Library’ is an exhibition of photographs that are a result of a tryst with books at one of the city’s oldest public institutions. The People’s Free Reading Room and Library was and continues to be one of the iconic grand old structures, reminiscent of Mumbai’s or rather Bombay’s old world charm. Of course, if you were to visit it now, you would see a glaring advertisement obscure a part of the building. However, this does not undermine the glorious beauty that the building once was.

Photographer Chirodeep Chaudhuri and Author Jerry Pinto spent about a year and a half, chronicling and exploring this iconic library in the modern context. ‘In the City: A Library’ expresses what they found.

Bookedforlife chats with Chirodeep Chaudhuri to read between the lines…

The handwritten notes, the bus tickets, little scribbles in the books, pressed flowers, a tram ticket…all these objects are a foreground in the photographs. How did you think of making these objects the story?

Before I start any project I make little notes to myself. As a broad concept, one of the ideas that I wrote down was to include mentions of things left behind…the kind of stuff that one finds left inside books. In old libraries especially, the chances of finding such stuff increases. But, when we did find things between the pages of books, we left it where it was. Things that have been left so long leave impressions. They become a part of the narrative.

One of the most interesting objects that we found were tram tickets. The last tram ran in Mumbai in 1968. And, the last stamp in a book in which we found a tram ticket, was around that time as well. So, these could well have been amongst the last tram tickets ever! Another interesting find was a pressed flower in Shakespeare’s Complete Works!

You found some really funny stories in the books didn’t you? Like a guy who kept writing about homeopathy. Can you share a couple of these instances? It’s almost like being let in into someone’s little secret!

Yes, we did find many scribbles. We found a letter from a daughter to a father about a holiday. There was an entire letter to the police commissioner requesting for speedy processing of the passport! We also kept finding books where there would be scrolls on the virtues of homeopathy. We found about 18 to 20 of them, and photographed about 4. There was one book where somebody wrote a review of the book on the title page itself.

Through all this material, you can build the portrait of an era!

Have you consciously tried to capture the physical interactions that people had with books? All the objects within, the notes, the torn dilapidated conditions. This is in fact what is absent in the digital age. Do you feel that it is this aspect that we are losing collectively as a society?

I think so. Just think about the people around you. How many are members of libraries? A library is indeed the most democratic space. Just think about it. You need to be only a seeker of knowledge to go there. It is tragic that people don’t inhabit it anymore.

When you were photographing the books at the library did you encounter people who actually used the books for reading? I think these days its more about students using it as a study-area!

We were shooting in full view at the library for about one and a half years. What really surprised me was that never even once…no one ever asked what we were doing! We were quite conspicuous. We would pull out the books, stand on stools to photograph them and so on. But, no one wondered! I believe that this in itself is a statement. I found this very strange.

The collection of photographs points out to the neglect of books and libraries in general. But, do you feel the story would be same (albeit in varying degrees) in other iconic libraries of our city or our country?

Well, top libraries do have funds at their disposal and they use it. But what we saw here is indeed the fate of many libraries. We can lament here, but I must also say that the apathy is on both sides. Sometimes, institutions do not give the vibe of being member-friendly. At the end of the day, institutions are alive if people are using them. The tragedy is that we are not using them!

For a booklover not to be moved by these images is impossible. But the poignancy of the situation hits us more, when we read these words written by author Jerry Pinto, who co-authored the exhibition.

That edifice which looks so imposing, those rows of books which look so welcoming, they are as susceptible to the passage of time as you are. Time ravages books just as much as silverfish, mildew and blades wielded in secret and in silence. The book has many enemies. So have libraries.

But the worst enemy of all is the sound of receding footsteps, as people walk away from libraries. Tell me, when did you last go to the library? – Jerry Pinto

In the City…a Library is perhaps a gentle nudge to all booklovers, to go and claim a part of a dying heritage.  After all, libraries only die when we let them.

Tags: In the City a Library

Why you should visit and read India and the World: A History in Nine Stories