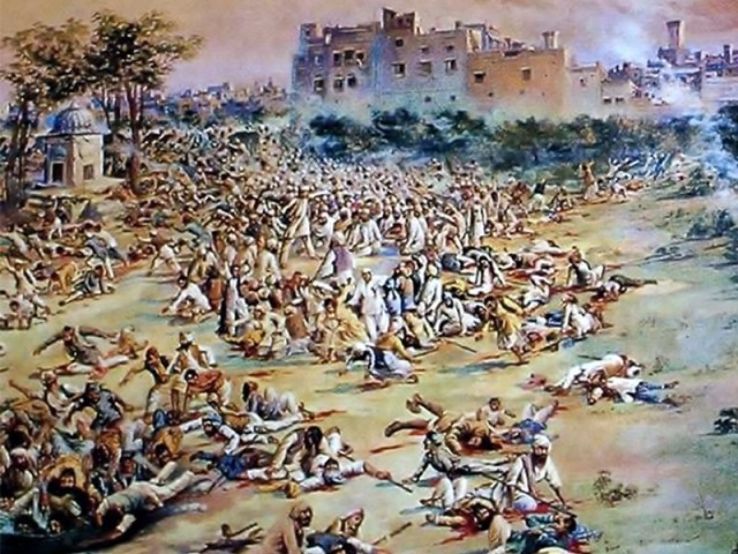 The Jallianwala Bagh is a very beautiful public garden located in Amritsar, but one which recalls a horrific history. A very touching memorial graces the gates of the park, that hides a dreadful story behind its beauty. The entry to the park is right from a bustling market street where people are shopping and making merry with carefree abandon. But, a poignant sculpture on the street draws your attention. The pristine white memorial indicates the sacrifices of countless people on that fateful day- April 13, 1919, when General Dyer ordered the massacre of innocents who had gathered in the park.

Today, one can enter the garden and walk around, paying obeisance to those who sacrificed their lives on that day. One can view the bullets stuck in the wall, and look down the well where so many must have jumped to save themselves. When the visitor of today, walks around the vibrant garden looking at children playing around and families sitting down and relaxing in the space and taking pictures, it seems so difficult to imagine that the park was a terrible scene of death a century ago.

This year, 2019, the dastardly act by Dyer completes a hundred years. Bookedforlife takes a look at literature that talks about this event.

Jallianwala Bagh by Kim A. Wagner

This is a rigorously researched book where Kim A. Wagner uncovers the experiences of ordinary people, British and Indian, and puts the reader at the centre of the simmering discontent and anxieties of April 1919. This is a nuanced approach to the dramatic events at Amritsar. It also shows untold narratives that shed new light upon the bloody history of the British Empire.

Jallianwala Bagh massacre, the butchering of unarmed innocents, is an event that shook us all. It provokes agony even today. What is the response of literature to this pain? We know that out of great pain, there is literary and artistic expression that arises, as people need an outlet to express a plethora of feelings ranging from pain to anger.

The authors are independent historians. They have explored a variety of materials related to the massacre. The book features portraits of key historical figures, political cartoons, newspaper photographs, propaganda posters as well as secretly recorded images that were smuggled out of India in 1919. Alongside the images featured in the book, there are eyewitness accounts to provide context and a chronological narrative covering not only the massacre but also its prelude and aftermath.

Martyrdom to Freedom by Rajesh Ramachandran

The author of this book is the editor of The Tribune. This book brings together essays of some of the best-known authors, thinkers and historians of modern India, alongside priceless articles from the archives of the newspaper, dating back to 1919. With profound insights and personal testaments, martyrdom to freedom is a valuable addition to recorded history.

The colonial atrocities committed by the British on that fateful way have been etched on the minds of generations of Indians forever. These books may be painful to read, but they tell a story that deserves to be heard. It is still important to acknowledge history, terrible as it is, with the sole view of learning from it. We do not know if there will be ever a sense of closure, but we can ensure as we look at historical events after a passage of time, that we understand the lessons that history holds.

Awaken your inner artist: Doodle away with the Bombay Drawing Room

The Intuti has arrived- what tarot, gestalt psychology and intuition can do for your creativity