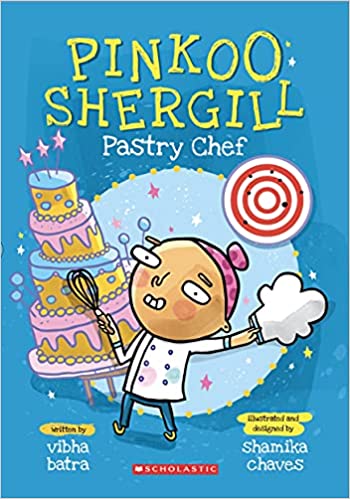 Come take a bite of Pinkoo’s scrumptious heavenly bakes and enjoy ‘melt in the mouth moments’ in Pinkoo Shergill Pastry Chef by Vibha Batra (Scholastic India). Pinkoo Shergill is passionate about baking sinfully sweet desserts but just a few know of his new love. He is scared of the disapproving eyes of his papaji. That does not deter him from losing hope, making a go for it in his kitchen and the biggest competition of his young life.

Pinkoo Shergill, a young boy of eleven breathes, loves, sleeps, and dreams desserts. But more than eating the sinful sweets, he loves to bake them. If not at school or the shooting academy, Pinkoo at any given time would be found in his kitchen whipping up sweet delights for his family.

But sadly, just a few know he is the baker since it is a secret. A well- guarded secret! Only his closest cousin brother (younger to him by a year) Tutu and school bestie Manu know. But why should Pinkoo not bake in the open, why keep it a secret? Just because his father Papaji has other ideas for his young son. He has big dreams for Pinkoo. He wants Pinkoo to be an ace shooter like his grandfather. He wants Pinkoo to learn and compete at various shooting competitions. Try and fulfill a lost dream of making it to the Olympics!

If papaji were to know Pinkoo wants to train as a pastry chef he would be highly disappointed. For papaji believes that a kitchen is no place for boys, least of all baking which cannot be made into a career. A preposterous idea indeed.

One day Manu lets Pinkoo know about the Indian edition of The Great Junior Bake -A-Thon which is to take place in Chandigarh. He wants his friend to participate. But how is that even possible? Pinkoo after all is a home chef who bakes in secret. He needs to learn more- the techniques, the important tips of baking. How to plan it all? What about his family, papaji? Who will help him out? What, about Tutu his blabbermouth irritating cousin who talks dime a dozen, has difficulty in keeping secrets may just roll out all their plans out of his tummy?

Enter Nimrat, owner of Coffee Oye, his fellow classmate, history project partner, and most of all annoying foe. Seeking her help is no easy task and will she even help Pinkoo out of his predicament?  Read on this refreshing fun story to know how Pinkoo and his gang of three handle home turf, school and baking mishaps along the way.

Pinkoo Shergill Pastry Chef by Vibha Batra is an entertaining delicious read. A story about pursuing what you truly desire, making a go for it. It is also about friendship, being there for each other when the need arises keeping aside differences. It touches moot topics like gender bias. Vibha has smartly used umpteen figure of speeches in her book. Alliterations, metaphors, similes, and not to forget the sizzling Onomatopoeias. They literally pop-out from her pages left, right and center. I had fun reading them out aloud and laughed away at the phitt phatt zapack sounds. Her book is a delightful read where you can say goodbye to boring adjective and verbs and be dazzled by exciting ones.  The cover page and illustrations by Shamika Chaves are visually appealing, her caricature doodling’s are on the mark.

I too love baking. I find there’s something very soothing, therapeutic about baking. Mixing all the measured ingredients together one by one, baking time and the heavenly fragrant aromas all around the house when done. So, while reading Vibha’s book had me wanting to look out for the bakes mentioned in Pinkoo Shergill Pastry Chef on social media. A raspberry pear souflle, fruit cream trifle, a gulab jamun cheesecake had me wanting for more.

By now I am sure you too must be ready to dig into the pages of Pinkoo Shergill Pastry Chef by Vibha Batra and bite into a sinfully rich decadent Banana cake with honey and almond glaze and go Mmm Yummm.