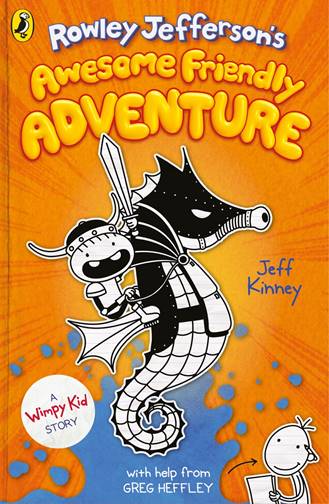 There are some writers whose reputation precedes them. I remember the time when Jeff Kinney visited India. He addressed crowds of young kids who had gathered at various bookstores across the country. The Diary of a Wimpy Kid, Kinney’s bestselling series had clearly won many hearts. It chronicled the diary of a middle-schooler named Greg. It is against this background that the storyteller spins another enticing tale. Here, he invites you into the world of Rowley Jefferson in the book Rowley Jefferson’s Awesome Friendly Adventure. While Rowley’s diary has also been published before, this book is much more than a diary.

For the uninitiated, Rowley is the much-lovable friend of Greg, the ‘wimpy kid’ in the original series.  However, this book has Rowley in the forefront. It is Rowley’s diary. But there is an additional element here. The diary entries alternate with a story that Rowley writes. As the plot of Rowley’s story develops, we see his diary entries recording his innermost thoughts.

It is tempting to compare the current book with that of the original series. Wimpy Kid was Greg’s diary about the life of a typical middle schooler. Rowley’s diary is all about his story and getting approval for the same from his loved ones. It is fun and humourous. But, do look for perceptive psychology where we actually get to know his character in a better way.

The diary entries alternate with the story. This book also carries the spirit of the fun and accessible style that made the Wimpy Kid series so popular. The infusion of fun illustrations makes reading the book all the better! The entire read is humorous both in terms of the language as well as the situation and plot. This makes it highly appealing to young readers. The book does take the reader to another tangent, since it is more of a story than just a diary. The concept of a story parallel to the diary makes this refreshing.

Should one start off with Wimpy Kid first?

One question that readers may grapple with is that does one need to have read the Wimpy Kid series prior? The answer is yes and no. If you have read Wimpy Kid you may be able to appreciate some nuances, especially of Rowley’s obsession of seeking Greg’s approval. In the Wimpy Kids books whenever Rowley wants to do something Greg bosses over him and does things his way. This streak is also evident here, where Greg has Rowley make many changes in the story that the latter writes!

However, The Wimpy Kid books are not connected to this one completely. Even if one starts off with Rowley Jefferson’s Awesome Friendly Adventure, one will be tempted to follow it up with the Wimpy Kid series! You may make an exception and read Diary of an Awesome Friendly Kid: Rowley Jefferson’s Journal first if you wish too. Well, go and grab this one, what are you waiting for?