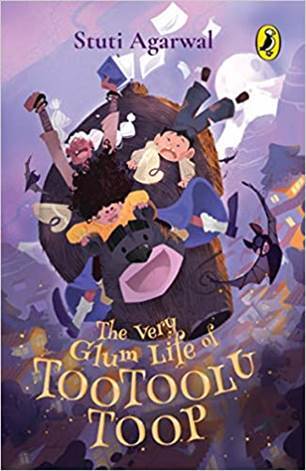 The Very Glum Life of Tootoolu Toop by Stuti Agarwal (Puffin Books) is the story of a small witch who finds her witchy world too mundane. Toolooloo Toot lives with her tribe underground. They literally live ‘underground’ in that they live beneath the hills. But they also metaphorically live ‘underground’, hiding from the human race. This is due to a war that took place centuries ago.

The ‘real’ world, with its non-magical creatures, that is, glums, beckons. Her knowledge about these folks comes through the books that she reads. Yes, she often sneaks fiction from an old house on the top of the hill. She yearns to go out there in the world and live life as a glum, and not use magic. How can she escape the confines of the magical tribe of the Darjeeling mountains? She decides to run away and try living like a ‘glum’.

But is living like a glum really as glam as she believes it to be? Life in the human world is an unforgettable adventure that leads to a surprising resolution. The book is filled with humour in the language as well as the situation.

Stuti Agarwal creates a beautiful fictional fantasy magical world right in the midst of the hilly Himalayas. The magical tribe has its own language and little customs, and these come out beautifully. Lovable characters make the book all the more endearing. Book lovers will also enjoy the references to other contemporary fiction.

The stars of the novel undoubtedly are Toolooloo Toop and her bold and spunky grandmother. In a sense this book is a also a delightful coming of age story. This book is set in a magical world but the themes and issues that we read of in it are all too human. Letting go of the past, being brave and adventurous for the future, letting bygones be bygones, encouraging children to really come into their own…these are some of the strands that are neatly tied at the end.

The Very Glum Life of Tootoolu Toop by Stuti Agarwal is a light and immersive read for children and teens. It is the perfect read if you wish to truly lose yourself in a fantasy magical world. Fun, fantasy, humour, suspense, adventure…. You will find all this packed in this snappy weekend read!