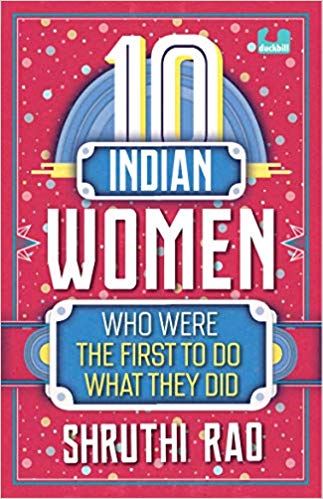 10 Indian women who were the first to do what they did encourages the young reader to look at the lives of remarkable Indian women in context of the society they lived in. Published by Duckbill Books, this slim tome by Shruthi Rao deserves a place in every young adult’s non-fiction collection.

What we are and what we turn into is often shaped by the times we are born in and the environment that surrounds us. Yet, there are people who overcome the seemingly unsurmountable challenges and the boundaries that threaten to thwart us. 10 Indian women who were the first to do what they did by Shruthi Rao covers the stories of ten remarkable Indian women who fought against the tides of time, and against the conditions and society they were born into in order to achieve great heights in their chosen fields.

One feels a surge of inspiration when one reads the various incidents and events that propelled these brave Indian women. Savitri Bai Phule’s daring attitude to light the funeral pyre of her husband in a time when women would jump into the fire themselves was brave and bold. Kadambini Ganguly, the first woman doctor in India, raised eight children and “somehow managed to find the time to handmade fine lace while commuting in horse-drawn carriages from one patient’s home to another”. Talk about balancing work and motherhood! Cornelia Sorabji struggled to set foot in law, a profession dominated by males.

My favourite story is clearly that of Jaddan Bai, who was the mother of well-known film actress Nargis. The story of her versatile life, and carving her strong niche in Bollywood after moving to Bombay from Calcutta is nothing short of inspirational. Of course, there are several other interesting stories as well, such as that of Indira Gandhi, each illuminating women from different fields.

Another very interesting dimension that this book opens up, is the fact that how women emancipation was connected to the social needs of the time. For example, India was among the first countries in the world where women to get medical degrees. Was this because of the desire to make women educated? No! It was because hundreds of women who lived in seclusion (and would not go to a male doctor) died needlessly because they didn’t have access to female doctors!

I love the fact that the book also highlights the contribution of men of those times who were supportive of the cause of women. Whether it was Jyotirao Phule who supported his brave wife, or Ambalal who fully supported his activist sister Anasuya Sarabhai, the men also get the appreciation they deserve.

Also boxed in the midst of individual chapters are snippets from letters or articles that were published during those times. At the end of each chapter, there is a boxed section on other women, both Indian and foreign, who have carved a niche for themselves in the specific realm covered within the chapter. This gives the reader more holistic information. Furthermore, this points to a new direction for further reading or research, should the reader be interested in exploring more.

I think what really comes out in these stories is the struggles that these remarkable Indian women have had to undergo for achieving what they did. It was not an easy path, for no other reason, but only that they were women. But, in the face of all those troubles, all that discrimination, these brave souls made their mark not only on their times, but also on history. And if this can inspire children today, both boys and girls, maybe their legacy will continue to bear more fruits! 10 Indian women who were the first to do what they did by Shruthi Rao is an indispensable addition to your library!

Read this book for free on kindle unlimited.

The Magicians of Madh delves into some delightful fantasy fiction