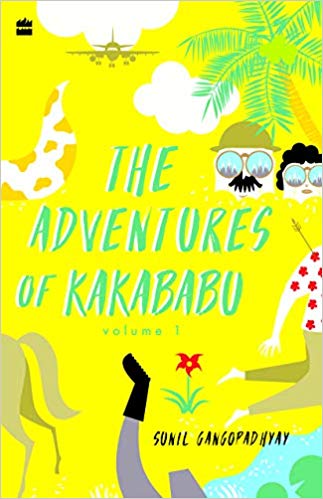 When ‘The Adventures of Kakababu’ by Sunil Gangopadhyay was published in Bengali, it was quite popular. In the realm of fiction for young adults, there is indeed a dearth of great stories based in India. The translation by Rimi of this classic into English, published by Harper Collins Children’s Books, is thus a very welcome one!

But first, a brief introduction to Kakababu…

Work Resume: Resigned as Director of Archaeological Survey of India

Personality and Outlook to life: Though he walks on crutches due to amputation of one leg because of an accident in Afghanistan, he is fit and strong, with an enormous intimidating moustache, is taciturn, highly secretive, carries a revolver on all his missions.

This book has two stories, each one packed with a punch!

This story is set in the beautiful and scenic Kashmir where Kakababu is on a mission. Shontu his nephew of 13 years accompanies him. Secretive as ever, Kakababu does not let anyone know of his exact plans as to why they are really there. Shontu thinks that Kakababu is measuring rocks in the search for sulphur mines.

In Pahalgam they meet Sucha Singh an affable but inquisitive transport contractor who has his doubts about Kakababu and his reason for being there and wants him to take on an expedition to help him find the lost gold from the Temple of Mattan. But Kakababu is not interested. One day while on a walk Kakababu and Shontu stumble upon an underground well and Kakababu finds a box with a treasure inside. Seeing the box, he hugs it tight and has tears in his eyes. Shontu is stumped into silence as he has never seen his uncle so emotional and thinks that it contains hidden treasures of gems and jewels but is surprised to see a rock with a lot of moss. After cleaning it properly out emerges a face.

Kakababu then tells Shontu the story and mystery revolving around his thirst to find the precious rock which was in fact a sculpture of Emperor Kanishka the First’s head of the Kushan Dynasty of Asia which had been lost for centuries and people had been trying to find it, and why they needed to take it back to Delhi immediately and give it to the government. But before they can do anything Kakababu is kidnapped. Shontu with the help of Siddhartho-da, a friend’s brother in law who are holidaying in Pahalgam try to rescue Kakababu.

Get the book and start reading to know as to what was the history behind Emperor Kanishka’s Lost Head? How did Shontu rescue his uncle?

King of the Emerald Isle- a Kakababu adventure!

In ‘King of the Emerald Isle’, Kakababu and Shontu are off for another adventure. Shontu is very excited since he is flying for the very first time. At the airport they are met by Dashgupto who is in charge of helping Kakababu for all his needs. This time Kakababu wants to find out why have a few foreigners visited the island and why have 6 scientists disappeared one by one through the years when they visited the unchartered island in which the Jarawa tribes lived in isolation?

What was there on the island that the scientists wanted and what compelled the tribals to kill the scientists or any outsiders with poisonous arrows? Dashgupto warns Kakababu not to visit for fear to their life, but Kakababu somehow hops out of the boat and runs to the shore with only his revolver and Shontu trailing behind him.

Read the adventurous exciting story to find out about the protected Jarawa tribe, who are the menacing gun toting foreigners, who is the king of the island and what are they protecting and don’t want the outsiders to know and how are Kakababu and Shontu rescued?

With lots of twists and turns, the book is a whole package of adventure, scary chases, drama, mystery, tense moments and nail-biting finish. One gets to know about the history and geography of Kashmir and the Andaman Islands. A thorough entertaining book for young children.

The author, Sunil Gangopadhyay was a poet and novelist. A prolific versatile writer and founder editor of popular Bengali Magazine Krittibas. He was the creator of Bengali fictional character Kakababu and wrote a series of novels on him and ‘The Adventures of Kakababu Volume 1’ is one of them which had been published in 1979-80 in Bangla and has been translated to English in 2019 by Rimi who translates Bangla classics and fiction in English.

The Secret Life of Debbie G by Vibha Batra and Kalyani Ganapathy, a coming-of-age novel

Queen of Ice by Devika Rangachari