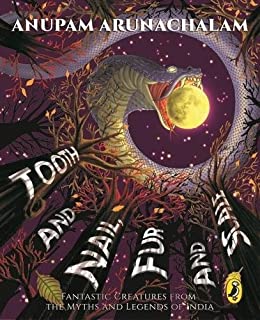 Indian mythology is full of fantastical creatures and we’ve woven legends around them. Yet, very rarely do these monstrous beings find space in popular books. Till now that is. Tooth and nail, fur and scale, a book for introduces us to some amazing creatures found in popular as well as long forgotten traditions. The book is intended for the 10-14 year age group.

Writer and illustrator Anupam Arunachalam draws out select creatures from the rich mythical stories and folklore of India, including several oral traditions which are replete with such stories. He weaves these fantastical beings into fifteen gripping tales set in varied locations and time periods.

It is also interesting to note that a couple of the creatures described in the book have their origins in works of old Greek and Roman lores that mentioned these monsters as inhabiting India.

With the repertoire of stories that we’ve grown up with, one may think that these creatures would be familiar to us.  But that’s far from the truth. They have been carefully drawn out from myths and placed in different situations and realities and weaved into a tale.

The settings for each of the fifteen short stories are varied. You will glide through ancient courts. You will meet a Yaksha at the airport, learn about a strange friendship between a pishacha and a human being, and ride to faraway mountains to meet gold digging ants or venture in the forest to encounter a cow eating tree. On the more sinister side there is the croccota who tears apart bodies of princes who dare to woo a certain princess. There is the astomi who feeds on smells, poochandi who kidnaps children and the pishachas who inhabit human bodies.

It’s a heady mix of tales. Some will spook you. Some make you smile and some are plain heartwarming!

My favourite story in ooth and nail, fur and scale was that of poochandi, the Tamil bogeyman. We’ve all been scared out of our wits as children by some version of the poochandi. While the protagonist of the story bravely follows a poochandi, hoping to catch him in the red handed as he takes away naughty children, does the faceless horror live up to his reputation of being THE one kids are scared of? Without revealing much, let’s say the tables are turned in this one.

At the end of each chapter, there is a brief description of the creature that forms an integral part of the story, and of course a lucid illustration of the monster as well.

What I find refreshing is that we have always placed mythical creatures in mythical settings. Here, in some of the stories, Arunachalam brings them out from their worlds and puts them in ours (which is why you have a pishacha ride in an Uber and a yaksha chatting with the protagonist at the airport fountain). This makes it fascinating and scary. After all, how can you be comfortable after knowing that any of these may well inhabit your current urban surroundings?

Humour and horror don’t really make strange companions as you will find out on reading “Tooth and nail, fur and scale”. The reader does smile all the way to the end! It’s got enough spook to raise quite a few goosebumps, but at the heart of it all are beautiful stories that will strike a chord somewhere within you!

So if you’re wondering about really fantastical creatures and where to find them, now you know where to look!

Tooth and Nail, Fur and Scale by Anupam Arunachalam

When Morning Comes by Arushi Raina: Duckbill brings a potent saga of youth caught in turmoil, as a part of the “Not Our War” series

The Very Glum Life of Tootoolu Toop by Stuti Agarwal