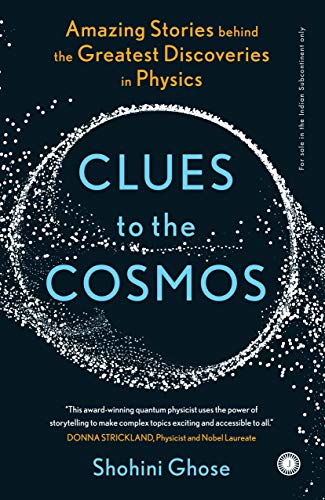 Clues to the Cosmos by Shohini Ghose (Published by JAICO Books) is a book about the amazing stories behind the greatest discoveries in Physics and the mysteries of space and the universe. What could be a bigger mystery than the question of how the universe works? And what could be a better way of expressing this mystery than the act of storytelling? This is a book born out of a deep love for literature and storytelling and an insatiable curiosity about physics, and more specifically our universe. Take it as an invitation to don your detective hats and search for clues to mysteries that exist in deep depths of the cosmos.

In the realms of science, the past is important. It is on the past that we build the future. To know what didn’t work in the past and to know what failed; to know the limitations of the past somehow frees the future for newer thoughts. And this is exactly what Ghose has in mind as she paints a vivid picture of the evolution of scientific theories to do with the cosmos, connecting the dots with the past matter.

As I read the book I felt there was an invisible thread connecting the past and the present. How did the thoughts of Galileo influence Albert Einstein almost 300 years later when he coined the theory of relativity? How did one isolated discovery in the past lead to something else in the future? How are scientists across the world and across time connected by that thread of discovery? How have ideas evolved over time?

There are many themes and stories that you will come across as you read the book. Some of these include the microscopic world of atoms and electrons, the explosive beginnings of our universe in the big bang, the workings of space and time, black holes, quantum physics, the mysteries of life, the workings of sound and light and much more.

We have often ‘learnt’ about these “theories” and “facts”. But, this is an opportunity to look at the stories behind these topics. So as the book talks about the wondrous discoveries of humankind and the enigma of nature and the universe, it is at the same time telling us a story of how it all came to be.

When you look at the history of research on physics and on space, which this book provides in a very interesting manner, you also witness the links of thought that pass on across generations. Maybe it is in this continuity that science thrives. In a sense the book is like a beckon, enticing the young minds of today to come and join the illustrious names that have made themselves immortal in the pages of scientific history.

The meeting between science and literature is always fascinating, and it is through this prism that this book looks at the history of the universe. So, are you ready to dive deep into the clues of the cosmos?

Tags: books for young adults, books on space, clues to the cosmos, shohini ghose, story of universe, the universe

Ruskin Bond’s Words From The Hills- a collector’s delight