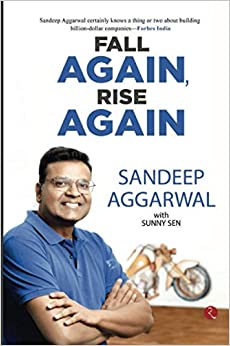 Fall Again, Rise Again by Sandeep Aggarwal with Sunny Sen (Rupa Publications) is a candid and honest memoir, narrated in a simple and very relatable manner.

The book starts off with his modest childhood that was filled with good values, but academic struggles nevertheless. From a child who wasn’t admitted to a school as he was not fluent in English, to someone who showed academic excellence in high school, the journey of failure to success was something that the author experienced right from childhood. However, college life was filled with more failure academically! But then again, he got a scholarship at university and rose once again.

As the reader delves deep into his life it all seems seems like a great roller coaster ride. His marriage and subsequent shift to the US; the making of the American Dream; his vast experience across different jobs; returning back to India and staring his first venture ShopClues; a charge of insider trading in the US and nurturing his next venture Droom. All this and more gives a picture of the deep personal and professional struggles that he underwent.

An individual is what he is because of the situation around him and the life experiences that he has. One of the most striking features of this book is how the authors link the then prevalent social and political scenario as a parallel to what was happening in Sandeep’s life at the time. When he was in college, the economic liberalization of the 1990s under the finance minister Manmohan Singh had really impacted the country. The Blue Star operation changed things. The advent of the colour TV had some role to play in his life. While he was in the US, the dot com bust gave another turn to events. It is interesting to view all these political and social events as a background against which the story of his life unfolds.

His insights about the other successful people he observed in his career are also quite perceptive as are the lessons from his own story. Having met people like Sabeer Bhatia, Bill Gates, Steve Balmer and Charles Schwab amongst others, surely gave him a unique point of reference to view life and work.

One of the key lessons as the title suggests is that success is about persistence and not giving up in the face of failure. However, Sandeep’s example opens up many other insights as well- how you can learn from other successful people, how you can move seamlessly from one field to the other and capitalize on transferable skills (he moved from IT to finance to Entrepreneurship) and most importantly, how to acknowledge that failure is a part of ultimate success!

Mark Twain’s books: What will appeal to children and young adults today