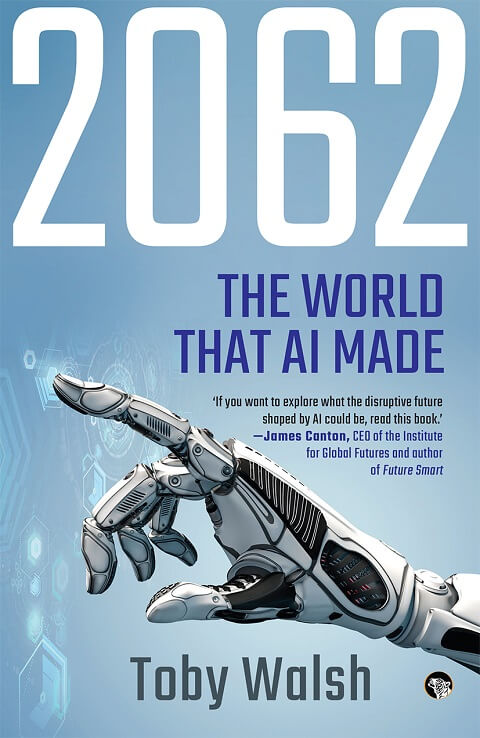 As human beings, we often harbour a superiority complex. After all, we are on top of the food chain. We have created machines that do our work for us. We have to some extent, learnt to tame nature. As Toby Walsh explains in 2062: The World That AI Made, (Speaking Tiger Books) “Human achievements are amazing, and no volume can contain all the wonderful achievements and successes that our species, homo sapiens, can lay claim to. We replaced the Homo Neanderthalensis about 50,000 years ago,” he writes. However, what follows is quite capable of startling us. “Like every species before us, we too will be replaced by a new and successful one,” he writes.

And who would our successor be? Any common man or woman today, would make the correct wild guess- AI. “Our successor is homo digitalis- the evolution of the genus homo into digital form” states Walsh. There, he has said it. But, is it really that much of a concern? We know the disruptive power of technology. We also know its redemptive potential. Is this problem urgent? Is it a problem or is it a way to a better future?

This is a book for the interested but non-expert reader. The book first goes into discovering why homo sapiens replaced homo neanderthalensis. It then traces concepts of AI and the debates and myths surrounding it.

Yes, AI is the way

“To perform some new task, a computer just needs a new program. This makes computers infinitely adaptable. The computers we have now have the potential to do much more than they do today. they even have the potential to become artificially intelligent. We just need to find the right program for our computer to run. This brings us to the next powerful idea. We don’t even have to find that new program because the computer can actually find it for itself. It can learn to do new tasks. It can even learn to behave intelligently”, writes Walsh, setting the stage to talk about the reality of AI, and the stark truth that what we fear is possible indeed.

One may wonder how computers learn something new. Well, we code them, and hence, unless we modify the code, they just have to follow our instructions. Right? Well, wrong. He talks about machine learning algorithms wherein a computer can improvise upon its own code. Hence, the process of “learning” and evolution of the computer continues. Walsh illustrates how computers can do much more than what they are told.

Understanding the nuances of AI

“I had played a lot of computers but had never experienced anything like this. I could feel- I could smell- a new kind of intelligence across the table. While I played through the rest of the game as best as I could, I was lost; it played beautiful, flawless chess the rest of the way and won easily.

-Garry Kasporav on being beaten by IBMs Deep Blue computer.

We may read statements like the above, which are true, and believe that AI is omnipotent. But, there are issues with this thought. it’s not as simple as it sounds. AI experts, as he shows in the book are wary of how quickly one can have this kind of technological singularity that will actually threaten our existence. In a particularly reassuring chapter he also discusses why AI comes with its own set of complexities, and how human cognition is a difficult nut to crack!

While AI has infused all industries and nothing will be spared in the decades to come, AGI, Artificial General Intelligence is where the issues lie. He also discusses several reasons why AI absolutely replacing human intelligence will not happen.

One of the strands of thought I found quite fascinating was whether our digital selves would replace the biological selves, or would both coexist? Would AI be a way to cheat death? What would be the moral connotations of immortality? The discussion on the morality linked with autonomous weapons in war and the future of war leaves the reader more terrorised than any prediction on AI replacing the human workforce.

It is all too easy to glow about the virtues of AI and equally easy to dismiss AI and proclaim is as a doom to humanity. But it takes thinking to really deliberate on the impact of AI in the context of human values and what it means to be human. This book targets the person who wishes to delve into these questions.

Would 2062 spell doom or promise? On one hand, human life can be better with the aid of machines. As the book describes, in the early 1900s people did more repetitive jobs and life expectancy was lower. Haven’t we come a far way? Is that not possible in the future as well?

I found some of the issues really pushing me to think. For example, we often say that AI will replace jobs. However, what about the jobs that could be economically unviable when done by robots? Even if they are viable (let’s say, we develop care robots for caring for the elderly) would we really want robots to care for us when we grow older?

What will the book give you?

This book bridges the gap between what common people think of AI and what experts really say. It lays the ground for further questions and probable answers that are going to be important as we enter this exciting new terrain of human evolution. I found this to be a deeply philosophical book, as much as a scientific book. It throws up many questions, and also lays out possibilities.

The book points out that the future need not be bleak. It can be driven intentionally for the benefit of humanity. As he says, “We will invent machines that are superior to us. They will be stronger, faster and more intelligent than us. But rather than replace us, I am hopeful that we’ll work out how these machines will augment and extend us”.

And while we talk about AI, he mentions, “The irony is that our technological future will not be about technology, but about our humanity. And the jobs of the future are the most human ones”.

It is possible that AI is a great leveller, and if what he predicts is true, AI will make life better. Society will be more equal, creativity will flourish and 2062 would be like a second renaissance. The problem (or maybe the saving grace) maybe with that is, it all lies in the hands of humans today!

As you read the book, you will realize how our views of the harmful consequences of AI are actually quite unfounded. You will also realize that AI may have potential, but we still hold the reins to the direction where AI takes the human race. And that is where we should focus. That is perhaps the most reassuring thing. Or maybe the most dangerous? Toby Walsh leaves it to the reader. Only time will tell.