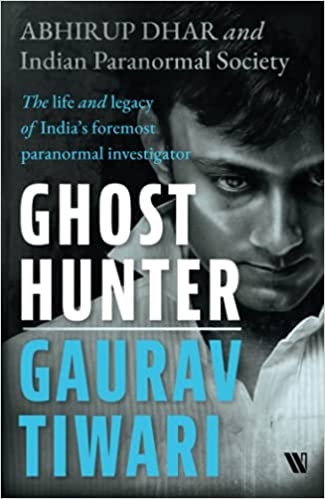 It is not commonplace to generally know about someone who investigates hauntings. One may tend to dismiss this off as fiction. But then, as they say, truth is stranger than fiction. Ghost Hunter Gaurav Tiwari by Abhirup Dhar and the Indian Paranormal Society, (published by Westland), takes readers into the world of the supernatural. It is the story of a man who dared to venture into unknown territories and explore the world of the supernatural in a very scientific manner.

Ghost Hunter Gaurav Tiwari, as the book’s title calls him, founded the Indian Paranormal Society (IPS) and gave legitimacy to a ‘profession’ that many people brush under the carpet. The author, Abhirup Dhar worked closely with the IPS team to elicit the story of this brave man who was passionate about understanding a different realm and then used his knowledge to help those affected by spirit hauntings.

Dhar, who is an acclaimed horror writer, merges his fine skill in creating suspense with that of being an authentic chronicler, capturing the life of Gaurav Tiwari and the various trysts that the team had with the spirit world. The book is hair-raising as a good horror-thriller thanks to the diverse experiences and hauntings that one reads about, educative because it breaks so many myths, and heart-warming because it is an ode to a man who was a true trailblazer on a path that most people fear to tread on.

The book is based on conversations with his teammates- all of whom share a deep respect and love for their mentor, and have been with him through varied adventures and assignments. But Dhar’s research goes beyond the team. He also brings in viewpoints from Gaurav’s contemporaries who belong to other paranormal research associations based in other countries.

We have heard about spirits and hauntings in stories and legends. But the fact is they happen in real life as well. The book starts off by describing what led Gaurav to pursue this uncommon vocation. Reading about this personal experience was spine-chilling in itself. Each chapter in the book covers one specific instance or incident that the IPS team investigated. Most of these were locales in various parts of India, and a couple of them were in Australia.

At one level, the reader reads it like a story with all the elements of a fast-paced paranormal thriller. But then, it strikes- this is for real. These are all descriptions of true events that the team has dealt with! As you read on and know how the team has worked hard to scientifically and logically study and measure supernatural elements from the spirit world, sometimes at great personal risk. One can’t help but applaud their dedication.

There were a few strands and themes that I did not get answers for in the book. What led to the death of this young ghost hunter? He did communicate with the team after he passed on, but was there more? The gripping book answers many questions, and raises many more. Clearly, this is not the end but the beginning of this conversation. There is something that makes one feel that this book is the start of many more to come- ones that will dispel myths and change the way we view the paranormal.

When I finished reading this book (in a single go as it was simply unputdownable) I sensed a newfound respect for those who dare to believe that the realms beyond us need to be studied scientifically. After all, as their mentor, the famed ghost hunter used to say, “Knowledge cancels fear”.

LIKEtoKNOW.it, Stories from the Influencer Next Door – A coffee table book on the influencer business.

Read your way to fitness with The Shivfit Way