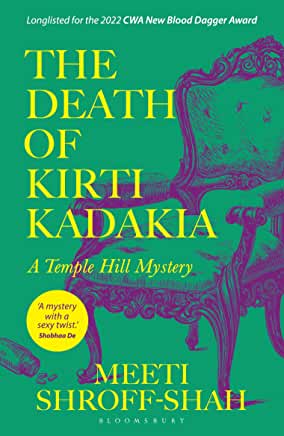 It is no secret that whodunits have a special hold over readers. There is something to say about the experience of commencing a murder mystery. As one reads, one tries to look for clues and cues, or any hints that point to the probable culprit. It is absolutely engrossing to find out any discrepancies in the words and actions of the characters that may lead us on to the truth. Just like other beautifully written whodunnits, Meeti Shroff-Shah keeps her readers hooked in The Death of Kirti Kadakia (Bloomsbury). However, this is a whodunnit that is much more than a simple murder mystery. Here is a book that works from different layers.

Of course, at the face of it The Death of Kirti Kadakia is a murder-mystery. The story follows bestselling author Radhika Zaveri, who has returned home to Mumbai’s posh Temple Hill, a fictional locale (which those in the know are aware is based on one of the most affluent neighbourhoods in the city). Her best friend Sanjana has just lost her father, Kirti Kadakia. While this comes across as a case of suicide, the thought does not sit well with the duo. Radhika’s sharp mind senses that something is amiss. And thus begins the quest of trying to uncover the truth about the death. As a whodunnit the book keeps the readers hooked till the very end.

However, it is the other layers that add on significantly to an already well-written story. The first aspect is the authenticity of the book. Shroff-Shah excels in presenting the nuances, mannerisms and idiosyncrasies of the affluent Gujarati community that inhabits Temple Hill. She takes us right into their lives where ”the fear of God is a mere second to the fear of what people will say”. We meet an array of characters who live in this gilded world with its own rules and powerful social mores. Right from their mannerisms and little actions, to their way of speaking, their cuisine, their home decor and their very existence, those in the know will be amazed at the rendition. For the uninitiated, it is a fascinating introduction to this unique world.

What also appealed to me was the humour- both in language and in the descriptions of the inconsistencies, phoniness and spuriousness of the residents of Temple Hill and the world they inhabit. The character of Radhika herself is appealing. She is a part of the community and yet can view it from a distance. She carries the weight of her past and unresolved issues, but yet, is agile to the demands of the present. She is an imperfect and therefore real character, enigmatic in her own way.

I have grown up reading mysteries- but those that were set in foreign lands, with brilliant detectives, but again, those who belonged to another time and place. Radhika Zaveri is set in the present, and she inhabits a familiar world. It is also a moment of pride, that a good story is set in what will hopefully go on to be the world that will harbour more tales. Meeti Shroff-Shah has not just written an murder mystery. She has also created an authentic world in which the adventures and trysts of Radhika Zaveri will play out. The Death of Kirti Kadakia by Meeti Shroff-Shah is thrilling, intelligent, exciting and authentic read!

The Festive Edit – Your book-buying and Diwali gifting guide

The Lord and Master of Gujarat by K. M. Munshi- a timeless and thrilling historical romance