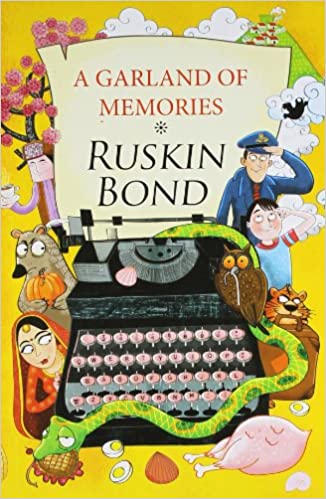 Those familiar with the work of Ruskin Bond will know that he is a living legend. Just a couple of years short of 90, the grand old man has a lifetime of poignant experiences and beautiful recollections to offer to readers across all age groups. A Garland of Memories (Natraj Publishers) weaves a very comforting and wise tapestry of some of his most timeless essays. Some of them will make you smile. Some will have you rolling in laughter. Some will provide a subtle lesson. Some will bring tears to your eyes. But all of them contain beautiful wisdom that is sure to become Ruskin Bond’s legacy for readers.

A Garland of Memories

There is something about the fantastic curation of the essays in this collection, that really brings out a myriad of themes and feelings. It is like a well balanced sample of the work that we associate with Ruskin Bond.

For one, this collection brings out a feeling of nostalgia. Older readers will resonate with the themes of the quieter times and a simple childhood. Younger readers will get a glimpse into a past devoid of networking tools but filled with a deep bond and connection to nature and the natural world.

I had grown up among those great blue and brown mountains; they had nourished my blood; and though I was separated from them by ocean, plain and desert, I could not forget them. It is always the same with mountains. Once you have lived with them for any length of time, you belong to them. There is no escape.

“So the owlets became regular members of our household and were among the few pets that Grandmother took a liking to. She objected to all snakes, most monkeys and some crows- we’d had all of these for pets from time to time- but she took quite a fancy to the owlets frequently fed them spaghetti “

Some stories themselves will have you crazy with laughter- even the one horror story that is well written and scary and yet so funny!

Nature in all her moods

Ruskin  Bond’s writing is of course synonymous with nature writing. The bounties and the beauty of nature finds its way into all his work. Whether it is the description of his beloved mountains, trees and flowers; or the travails and adventures with little creatures you’ll find something to amuse and delight you!

For instance, the story of how Ruskin and his grandfather rescued and adopted two owlets, and their consequent tryst with the angry mother, makes for some delightful reading. So does one of the essays that describes a fight between a cobra and a mongoose, all view from the strong branches and soothing shade of the great banyan tree. His account of viewing a leopard in the essay titled ‘The Leopard’ though, represents for me, the best example of a mature and honest take of the man-animal conflict! Written through the eyes of young Ruskin, it showcases how blatantly and insensitively humans have been destroying the natural world, rather than coexisting with it.

While Ruskin Bond is nearing his 90s right now, the essays reflect the sweet days of his childhood. It makes me envy the sheer freedom, beauty and simplicity of a childhood close to nature. He had an assortment of pets for company, (and this fact somehow reminds me of Gerald Durrell’s My Family and Other Animals); he sat high up on trees and had the time and inclination to appreciate the sounds of nature. Indeed, the book is rightly titled ‘A garland of memories!”.

I feel these essays make me mourn the loss of a childhood that we can’t give many children of today. And yet, perhaps, I think just reading about it, and trying to recreate it in our own manner, within the context of the modern life, there might just be a chance to relive those adventures!

To me, A Garland of Memories also showcases a philosophy of life- a life that is one with nature. And this is made clearer in the chapter “The Man who Lived Trees” which talks about his grandfather, and how his love for trees permeated his very being.

I read A Garland of Memories only to be deeply moved once more by the power of Ruskin Bond’s simple words. Each year, as he curates his old work and publishers sought out different collections, I realise that the timeless wisdom contained within these books are already a literary legacy, a garland of memories that speaks to all our souls!

“Whenever I feel restless, I sit down and watch the goldfish. They never fail to calm my nerves. There they are spending  their entire lives in a few cubic feet of water without apparently suffering from any form of neuroses. Their very aimlessness appeals to me”

Demystifying puberty for children- Two books on puberty by Niyatii N Shah take on the task of educating children about changes in their bodies and minds.

Dear Ijeawele, or A Feminist Manifesto in Fifteen Suggestions by Chimamanda Ngozi Adichie

Lend Me Your Ears: The Puffin Book of Elocution Pieces