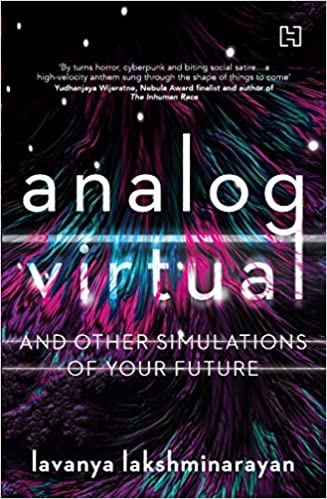 What does the future look like? Rather, what does a digital AI powered future look like? Where is humanity headed? Against the background of the world where we have been forced to exist in a digital realm thanks to a pandemic, this question seems all the more urgent. Analog Virtual and Other Simulations of your Future by Lavanya Lakshminarayan (Hachette India) uses short stories to explore a dystopian future.

Bell Corporation forms the crux of these stories. There is a virtual world that is dominated by this “company”. Then there are the analogs who are the outliers living on the fringes of this digital world. The latter are humans of today, fast tracked into a digital future where they are excluded, and blatantly so.

Laced with sarcasm and wry humour, the stories lead us into the dreary future where minds are controlled. It is a future where digital data helps the corporation and those who work for it, shape the personalities of citizens. The goal is to get them to fit in the norms and images that have already been predetermined. For instance, The Opinion Homogenisation Limitation and Alignment Unit is concerned with people having the ‘correct’ thoughts and opinions. Impressing those in power and towing the line will get you into the “top group” who are “allowed “ to have everything. Bio chips monitor the humans who live in the civilized and developed virtual world. Productivity is the name of the game.

Some of these “techno-atrocities” might seem frighteningly familiar. Big industrial lobbies dictating lives? Taming of opinions? Squashing originality? Being punished for not following the system since the system always rewards good behaviour. Of course, the system, that is the corporation defines what’s good. The company tracks everything that affects the life of every citizen. For example, there is a marital bliss tracker. Frighteningly similar to the ‘cookies’ of the wen today? These themes run across our lives today as they do in the digital future reimagined by the author.

Across the stories you’ll see visions of moments and events of our lives today, that might just disappear. For example, in one of the stories the protagonist hears a 40-minute-long song that celebrates acoustic instruments, a rare rarity. In another story, the underground drainage system is in disuse since the analogs have no running water. Hence, it’s used for travel…maybe forbidden travel. The experience of pregnancy seems distant – unborn babies are transferred to PregaPods, and no one gives birth the old-fashioned way. Some stories show us how exiled humans live on the fringes of the digital civilization. One of them works at a farm where trees bear fruit under surveillance. Fresh produce is the right of the top one percent.

This book is an exciting journey. On one hand the sci-fi side of it is fascinating. On the other, the irony underlining the events is hard to miss. Even as we become more sophisticated in our implementation of technology, are we letting ourselves become lesser human? Worse, do we realize how those in power can control our very humanity?  Will capitalist powers take away our very humanity by leveraging technology? What if the greatest danger is not AI ruling the world, but powerful humans using AI to control other human beings? And what if this control is so pervasive that the very nature of humanity changes? These are interesting questions to think about. If you are interested in a non-fiction exploration of the impact of AI on the world, do read 2062: The World That AI Made by Toby Walsh explores the impact of AI.

Coming back to this book, each story starts with the Snippets from the manifesto of the corporation. Not surprisingly they increase in being more sinister with each chapter. The end spirals with stories that point to conflicts between the analogs and the virtuals. There is a lot this book of short stories will lead you to think about, even as they will entertain you will the possibilities of the future!

These stories will also give you something to think about. It will especially appeal to those who like to read dystopian fiction, sci-fi and books about technology and its impact. Analog Virtual and Other Simulations of your Future by Lavanya Lakshminarayan is a promising read!

Yours in Neem…..talking about the miraculous tree with Klaus Ferlow, author of Neem – Nature’s Healing Gift To Humanity

A whacky fictional account of globalisation, The Sellout Nation by Vikram Bhatti explains the truth…or the lie about ‘Gol-bol-lie-sation’.