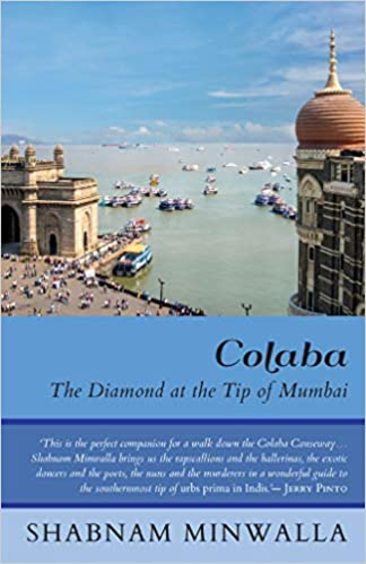 I have lived in Mumbai all my life and love looking at stories of my city. If you are a Mumbai resident, Colaba cannot escape you…and you cannot escape it. The history of Colaba is fascinating and the area holds stories in every nook and corner. There is a lot to explore in Colaba and being a resident with a point of view offers something special. In Colaba- The Diamond at the Tip of Mumbai (Speaking Tiger), Shabnam Minwalla weaves an enchanting tapestry of one of the most ‘happening’ and yet historical areas of the city.

Narrated by Minwala this book is almost memoir-like in spirit, and not just about the history of Colaba. The reader revisits her childhood in one of the famous schools in the locality. You visit the old buildings, some of them that are sadly no more. You marvel at Colaba through the eyes of a child as well as the eyes of an adult. As a reader, you trace the history of Colaba, and you wonder at its evolution. You feel a tinge of sadness at some of the lost glory. You feel glad that a lot of its old-world charm is still intact.

As I read the book, I enjoyed looking at the archival photos of many buildings that are familiar sights. I can imagine walking down the road to Wesley Church, turning right and walking towards the Mahadev temple. I do recognise the old Banyan Tree that has provided shade to that street for years. A tree, that also harbours a unique ecosystem of its own in the midst of a busy city.

In the book we also meet interesting people. After all, what is an area without its people? Some of these ‘characters’ you may not know personally but will recognise all the same. The fisherwoman, the salesgirl, the fruit sellers and local vendors, each with their own backstories. And of course, some of the people mentioned in the book have fame and name to their credit. Think Pearl Padamsee, Leela Naidu, the infamous Kawas Nanavati, Dom Moraes, Mohammed Rafi and many more residents.

The book also takes you through the Colaba of the past. A Colaba that was an island, newly connected to Bombay. For the Geography buffs, there is interesting trivia that takes you through the evolution of not only Colaba, but also Bombay. You’ll solve a few geographical mysteries with the author as you delve into historical records and old maps. You’ll see the past transform into the present right before your eyes, in your vivid imagination.

And why only talk about the human residents? We also meet the famed Gulmohars that set the landscape ablaze with their fiery blossoms; the magnanimous rain trees; the buildings and monuments that have been witnesses to the changes over the years. And of course, the lashing sea waves that are intrinsic to the place.

A little quirky touch at the end of each chapter is the “Colaba Lesson for Life” that beautifully sums up what the place teaches you. At the beginning of each chapter, there is a little note from an actual resident of Colaba, someone who’s seen the difference between the then and now. Best of all, the writing is laced with humour.

There you have it in good doses- nostalgia, humour, research, personal accounts, a deeply original point of view and a well-captured and crafted account of a slice of Mumbai. Shabnam Minwalla is just the person to write this book. Not just because she has been a resident of Colaba since birth. While that helps, one only needs to turn to a few other books by Minwala to testify to the fact that she is indeed a city historian. In her book, “What Maya Saw”, written for the YA readership, the history of Bombay figures strikingly.

I found some small details that interested me personally as well. I was relieved to know the true origins of the Taj Hotel thanks to the relentless pursuit of excellence by Jamshetji Tata. It was good to know that the hotel was intentionally designed facing its back to the sea and that no architect had committed suicide on designing it backwards! (those who know this rumour will understand).

So, who should read this book? It would probably be categorized in the travel-writing genre. If you’re like me, a die-hard (south!!!) Mumbaikar who revels in the spirit of the city, it should come as no surprise that Colaba is indeed a microcosm of what we dream Mumbai should be. And if you are one of those who still call Mumbai ‘Bombay’, you’ll resonate with the spirit of the book and the in-depth history of Colaba that marks its pages.

If you think you know Colaba well, it will challenge you to explore it a bit deeper. You’ll surely find a new perspective in the book. If you’ve felt nostalgia for any place before and resonate with nostalgic writing that comes from being madly in love with a geographical area, well, this is the book for you! It is a gentle guide to Colaba and a simple delightful read. However, more strongly it tells you how a space can grow on a person. So, dip into a delightful history of Colaba…take sips of nostalgia, and marvel at this gem of Mumbai!

200 years and still alive- why the appeal of Frankenstein is timeless.