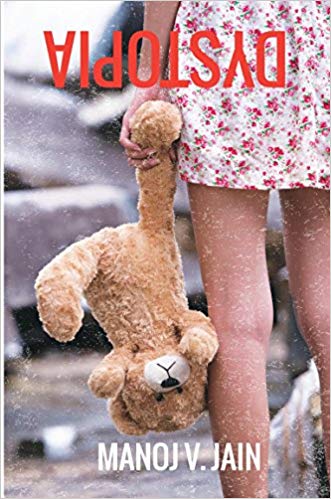 There are three things you can’t get back once you have lost it- trust is the first, innocence is the second and childhood, the third. Some people are lucky to have a prolonged childhood that continues well into adulthood, while some have their childhood stolen from them even though they are still children. Early memories play a vital role in the shaping of human personalities and provide a skeleton for the kind of adults we will be.

Manoj V Jain’s Dystopia is the story of five school friends who reconnect after decades and attempt to resolve why a dear friend killed herself at eighteen. The book is set in the cosmopolitan city of Mumbai and is centred on a single night at one of the friends’ house. Regular flashbacks take you to different points in time giving the narrative some perspective. While there are five characters in the book, the central character of the book remains the guiding spirit of Dystopia. The spirit has a strong voice that adds depth to the story and gives the reader an insight into the minds of each character.

Jain has divided the story into two parts- Shambala, the idealistic and dreamy world of adolescence and Dystopia, the dark and angst ridden reality. Dystopia is described as an alter ego of Shambala where every dark facet of one’s personality is brought to the fore front and given the freedom to express itself. However, sometimes the voice of dystopia is extremely jarring and one begins to hope for better editing of the story. There are too many sudden sputters to the narrative thus obstructing the flow.

As with any murder plot, the end is a shocker and takes you by surprise. The reason for Anandita’s death is the final piece of the puzzle, but yet the story somehow feels unsatisfying. Dystopia is a good read for those grappling with childhood pains, growing up, teenage angst, role identities and parenting but one should be careful that the book does not end up being a trigger to past problems.

What makes the heart tick? Heart: A History by Sandeep Jauhar is a unique take on the most important organ of the body.

In the Realm of Demons by Imran Kureshi