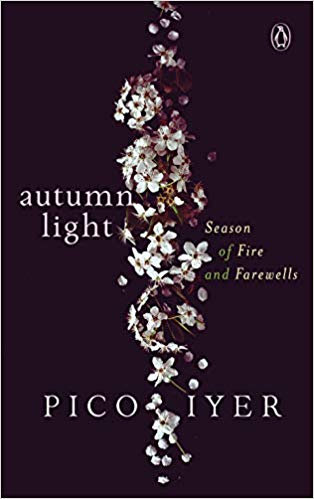 Almost 25 years ago, Pico Iyer visited Japan for the first time, as a transit passenger. This little diversion must have been some preordained plan, because Japan made way into his soul. Well, quite visibly. Few years later he found himself in the country, and also found love. Japan had claimed the California boy as her own.

Japan also gave him his first book- The Lady and the Monk. In the famed author’s latest offering , Autumn Light- Season of Fire and Farewells, published by Penguin Viking, Japan once again makes a dominating presence felt. The perspective has changed though. This time the story gently touches on concepts of death, decay and impermanence, probably the ultimate truths of life.

There is a beauty in impermanence. There is a joy in capturing the transient. Where else can this eternal truth be encapsulated but in the essence of Japanese philosophy. Within Japan, where Pico Iyer first made a defining decision, lies this exploration of what autumn represents.

The author returns to his beloved Japan in Autumn and all around him he observes changes. But, he seeks out the « changelessness in change ». Through the narrative of his own story he ponders over this much larger question.

There is a gentle discussion of death as Pico is confronted with the same. His father in law passes away; his wife decides to shift her mother in a nursing home ; the ponderings of the mother on this decision; the ritualistic markings of obeisance to the dead ancestors ; the stories of the pain of war stuck into the minds and collective consciousness of common people; the separation and disintegration of familial ties…All these streams of thought have been approached gently but remain deep and poignant.

There are many threads that run through the narrative. One of them is the relationship of old parents with their young children. How do the filial ties hold once birds have flown from the nest? How does the modern generation confront mortality and old age of parents?

Deftly woven words, wry humour, and a gentle, almost inviting manner of addressing what many may call dark topics, is what is so endearing about the book.

Another running theme in the book has to do with Ping-pong. While in Japan, Iyer regularly plays ping-pong with people much older than him. They may be seniors but that’s no deterrent to their agility and perfection at the game. It is through the prism of this game that we get one more glimpse of how the old can be celebrated.

This book is part memoir that seeks to answer larger questions of mortality, as it shuttles between the past, present and future. It is also a very personal glimpse into Japan and ‘Japonisme’.

Autumn slips into his spirit and voice. His wife, Hiroko, has a family story linked to the wars and the bombing of Hiroshima. Through her memories of the days the sad tales of the futility of war come out strongly. The personal speaks for the collective. The war still haunts the people who have memories of it.

When I read Autumn Light, it is in a period incidentally spread over a few grey rainy days in Mumbai. It is as if the environment around me has set a stage for the lyrical and soul stirring pondering that one can expect from a master of words like Iyer. He poetically skips between incidents unfolding in his life and that of his loved ones, the changes he observes in people around him as they grow older and the descriptions of autumn as well as inherent Japanese customs and philosophies. All this swinging between different topics and also between past and present is done beautifully. What you ultimately get is a well-choreographed orchestra of words that will unleash thoughts about the meaning of life. Perhaps, the genius he is, Pico Iyer knows exactly what kind of reaction this book will evoke within the reader. When his wife asks him about the book, “your book, nothing happening?”, he replies: “Well, not exactly nothing. But what happens is not so visible. It’s hard to see which parts are important until years later. Or maybe never.”

But, I am sure that readers, as they take time to savour this profound book, will come to realise, as Iyer does, “Why, I wonder, must I be so often running against time, when I know the only way to be happy is to make my peace with the autumn and see it as a friend “!

Creating Sanctuary: How can you come home to yourself?