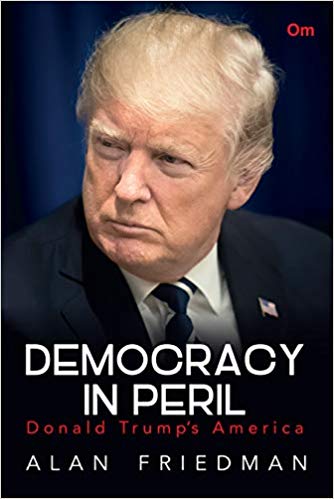 Democracy in Peril by journalist Alan Friedman examines some crucial and important questions about America as we know it today, quite different from the America we thought we knew. How did it all come to this? The true mouthpiece of any democracy are its people, and this is exactly where Friedman delves into. Through exhaustive travels within America he presents a picture of what has led to the current state of illiberal democracies.

He is also vocal about parallels between Trump and Narendra Modi, which he examines in an introduction in the book. Published by Om Books International, this is a book that provides a unique perspective that may talk about America, but has takeaways for other democracies.

Excerpts from an email interaction with Mr. Friedman about “Democracy in Peril”

You talk about political populism and fringe politics becoming mainstream. You look in detail at the historical context that points to the genesis of the ‘wrongs’ that have given rise to this situation in America. Do you feel that at the heart of this issue lies delusional politicians themselves?

All politicians are to a greater or lesser extent the tellers of lies.  But the Big Lie strategy of populist-nationalist Far Right extremists is different; witness Hitler, Mussolini, Stalin.  Fringe politics becomes mainstream usually in times of economic or social distress, after a crisis, after a war, after a long period of suffering.  The fringe extremist uses the language of hatred and fear to get elected, and then once in office tends to diminish the independence of the judiciary or the free press.  This is what I mean to communicate here.  At the same time the mediocrity of the center-left, as was seen in the case of Hillary Clinton, can give way to complacency, and this means that the fashionable set in Washington, or if you wish, the fashionable Delhi set of intellectuals and civil servants who supported the Gandhi family lived too much in a bubble and at a certain point were no longer in touch with the electorate. This paved the way for the rise of populist nationalists, who used the politics of racial division to win.

It is interesting to note the exhaustive research that you have put in the book, especially in terms of interacting with common people on the ground who experience the effects of government policies first-hand. How has this journey been for you personally?

I am glad that you asked this question, because as an American who has lived for the past thirty years outside of the United States, in London, Paris, Milan, Rome and Mumbai, this was  in some ways a traumatic voyage.  To spend months travelling through 16 states, through the poverty of Mississippi, South Carolina, Alabama, Louisiana in particular, one sees deep poverty that is equal to what I have seen in village India.  Actually, no, in village India at least the populace has access to fresh fruits and vegetables! In the food deserts of Mississippi, that’s not the case. Talking to workers and coal miners, to preachers and supermarket workers, to the lowest rungs of American society, was a revelation.  Most startling is how they support Trump, despite the fact that he is cutting away their welfare, their social safety net, their food stamps, their help for single mothers.  They do not care, because instead of looking up toward the billionaire class with resentment they look down at those even more unfortunate, the immigrants and foreigners, and minorities.  This is not the America I grew up in, and it was quite a sad business seeing how my country has changed.

We have grown to believe in the power of the common man or voter in a democracy., to choose a government that will work towards his good! Do you still think this holds true?

I believe in democracy of course, but I would also recall what Winston Churchill had to say: “Democracy is the worst system in the world, except for all the others.”  The paradox of democracy is that it was originally through elections that Hitler came to power in Germany, and Mussolin in Italy, and Trump in the United States, and Erdogan in Turkey, and Putin in Russia, and Orban in Hungary, and Duterte in the Phillipines.  It was only after their election that they began to chip away at the institutions of democracy, the checks and balances of democracy.

Are illiberal democracies here to stay? As a journalist who has observed these developments from close quarters and various perspectives, what would you advise be for the common man who stands confused in midst of information overload and the unfortunate dilution of the fourth estate?

I would advise everyone to stay informed, to not believe any single website or single newspaper or TV news, to always seek at least 3 or 4 different perspectives.  I would advise every person to remember that democracy and human rights and the equal treatment of different ethnic groups and races is the key to our society staying together and prospering.  In India, like in America, the nation’s strength has traditionally come from its rich cultural diversity.  My advice is to reject any politician who promises an easy solution to the economy, or a demonetization.  Reject any politician who preaches the politics of anger and fear.  And remember that democracy is fragile, worth defending.  It takes a long time to build, but it can be destroyed rather quickly.

You write in the book, “Those who do not learn from history are usually doomed to repeat it”. What do you want the book to accomplish. How do you think the message will filter to people?

My goal in this book is to chronicle a dark period in world history, to reveal the inequalities of American society, to explain how and why evil people can come to power and to warn against the damage they can do to our freedoms. This book is intended as a wake-up call for every thinking person.  And in the same spirit I would like to close this interview with a book recommendation:  The book is “It Can’t Happen Here” and it was written by Sinclair Lewis in 1935.  It can happen in America, and it can happen in India too.