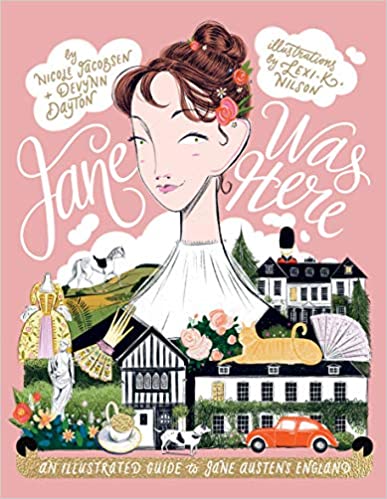 Jane Was Here by Nicole Jacobsen and Devynn Dayton (Hardie Grant Books) is a labour of love, that takes readers to Jane Austen’s England. The authors and illustrator, Lexi K Nilson, belong to the growing world of Jane Austen fans. Jane Austen lived two centuries ago. However, her popularity only increases as time rolls on. What makes Jane Austen so relevant even 200 years after she lived?

The answer in part lies in the book that infuses a whimsical spirit in a refreshing exploration of Jane Austen. Agreed that there is a lot written about Jane and her life. Right from research-oriented biographies to simple texts, there is a plethora of literature on Austen herself. But there is always a new angle and approach to look at Jane Austen! Moreover, one can’t really ever tire of Jane Austen memorabilia, can we?

However, Jane Was Here mixes just the right amount of information with beautiful illustrations to complement them. It looks at where in England Jane Austen would have set the stage. What was that canvas on which she painted such an intricate and insightful picture? Where does it exist today?

Starting off with biographical information and a timeline of her life, Jane Was Here takes you on a journey to places where Austen’s novels are set, and where her characters travel. Obviously, it all begins in London. The book now becomes like a travel guide (actual as well as armchair!) and thanks to the references from her novels as well as Jane’s letters, the reader also ‘experiences’ London the way Jane or her characters did. In the process, the reader will get a little glimpse of what is same and what has changed in the past centuries! Ditto for the other places. One by one you travel across England, looking for Jane’s spirit.

Every Jane Austen fan will delight in this treasure of a book. Of course, the overarching theme of Jane Austen’s England is evident. But, little snippets will also amuse you to no end. The architectural details of the English homes. A look at the horticulture of the times, and the well-manicured gardens. Touching upon a card game at tea-time. Different types of tea-cups. The delicacies involved. Regency dressing. Skimming a bit over the various movies and shows inspired by Austen. If it concerns Jane Austen’s England, it’s all there is in book.

This book is a keepsake. Take it with you as a guidebook if you ever have the opportunity to take a literary tour of Jane Austen’s England. Read it for information, or merely to revel in the beautiful illustrations. Keep it by your bedside and refer to it when you need to feel a bit of Jane’s humour and wit!

I loved the very generous sparkling of quotes by Jane Austen and characters in her novels. “If adventures will not befall a young lady in her own village, she must seek them abroad” goes a popular quote from Northanger Abbey. For me, a very satisfying adventure through Jane Austen’s England took place right here in the pages of this book.

The Ramayana Secret by Anurag Chandra