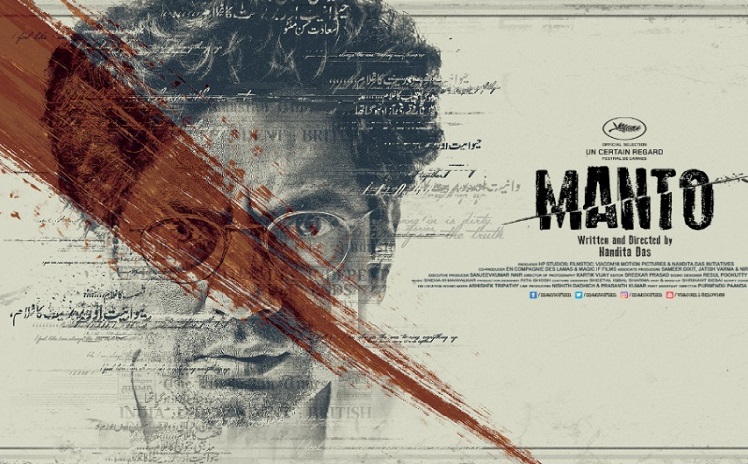 Housed in a statement making turquoise-walled building, BARO, a striking home décor store is boldly decked in the spirit of an art gallery. The trio behind BARO, Mahesh Mathai, Srila Chatterjee and Siddharth Sirohi, have worked in the realm of film and advertising. However, going further from being a showcase of beautiful art and furniture, BARO has emerged as a cultural hub. Recently, the space bustled with a spirit of a different kind- Mantoness. The occasion was the screening of Manto, a biopic of the famous Urdu author Saadat Hasan Manto, written and directed by Nandita Das.

Manto is Das’s second film after Firaaq (2008). It stars Nawazuddin Siddiqui as the profound writer who had a very short but extremely eventful life. Manto translated novels, wrote short stories, essays and screenplays. His life in Bombay of the pre-partition days is a topic in itself! He immortalized his interactions with the film luminaries of the times in a book called “Stars from Another Sky”. His challenging life was fraught with issues. Charges of obscenity were often imposed on him. He migrated from Mumbai to Pakistan after Partition. He had a drinking issue which affected his liver. He died in 1955, at the age of 42. Das’s film captures the spirit and essence of Manto, by focusing on a specific period in his life.

Bookedforlife caught up with Nandita Das to know more about Manto and ‘Mantoness’ or ‘Mantoniyat’….

It is often so easy to fall into the trap of ‘explaining’ the reasons behind the behavior or presentation of a character, bringing in the element of being judgmental. Manto’s failings towards his family, and his intense involvement into his craft are very well-known. In the movie you have achieved a very delicate balance of showing things as they are without giving explanations. How did you manage to do that?

Biopics have an unsaid burden of glorifying its protagonists, but I feel Manto would have liked me to portray him with all his warts and blemishes and not put him on a pedestal. For him, beauty and ugliness together make a reality. Manto, through his writings pushed our limits, our morals, our prejudices. In a way, I have tried to do the same through the film – to question our morality and righteousness, our empathy, our ability to be moved without being manipulated. Manto was not sentimental and I didn’t want the film to be either. I wanted to tell the story honestly and let each person take from it what they wanted to.

You have talked about “Mantoyiat” in a past interview. How would you define it?

For me Mantoiyat (‘Mantoness’) is the desire to be honest, outspoken and courageous! I believe all of us have it, whether dormant or awakened. If we carry a bit of that Manto spirit with us after watching the film, I would consider it mission accomplished. The film hopes to make people uncomfortable in a way that they would want to do something about it. After all, we all want to be more truthful, courageous, and free-spirited. And Manto inspires us to be that.

Manto’s works blur the lines between fact and fiction. The movie interweaves his fiction within it as well. What made you take this call, and how do you think it works for the movie?

If you make a film on Mozart, it would be incomplete without hearing his music. In the same way, I felt Manto’s life story cannot be told without giving a glimpse of his work. To understand the man, one needs to know how and what he wrote and to understand his writing, one needed to know the person behind it. Also the line between his fact and fiction are blurred, so right from the beginning I had thought of interweaving his stories in the main narrative, almost seamlessly. I felt this form would allow the audience to enter his state of mind, both as a person and a writer.

What is the one lesson you want the audience to take away from Manto’s life?

In the face of all the friction and disharmony surrounding us, and conversations becoming increasingly polarized, I thought I could take refuge in history and in Manto to respond to today. It allowed me to not be didactic and yet convey what I want to say as there is a deep resonance between Manto’s struggle to be himself and our own desires to find our true selves. The times are not too different either, even after 70 years. I think the greatest lessons the audience can take back are Manto’s convictions and his courage. When one’s truth is stronger than one’s fears, courage follows.

I think after watching the movie, many people who may not be familiar with Manto may want to visit him through his work. What would you recommend they start with?

If they can read Urdu, then you have Manto’s world at your disposal. If you can read Devanagri, you have his vast collection in the 5 volumes of Dastavez. But if English translation is what you will need to rely on, as I did too in the beginning, then your choice currently is limited. Sadly, I don’t like most of the English translations this far. There is ‘Bitter Fruit’ edited by Khalid Hasan but maybe the better ones for stories is ‘Manto’s Selected Stories’ translated by Aatish Taseer and for his essays I recommend Aakar Patel’s ‘Why I Write‘. I believe some more are going to come out later this year. I am delighted that Manto books sales have gone up considerably, thanks to the films. That’s my two bits in spreading Manto and Mantoiyat.

Well, our society could do with doses of Mantoness or Mantoniyat for sure!

Bibek Debroy says it with limericks!

Empress- The Astonishing Reign of Nur Jahan by Ruby Lal

A Little Book of Flowers by Ruskin Bond