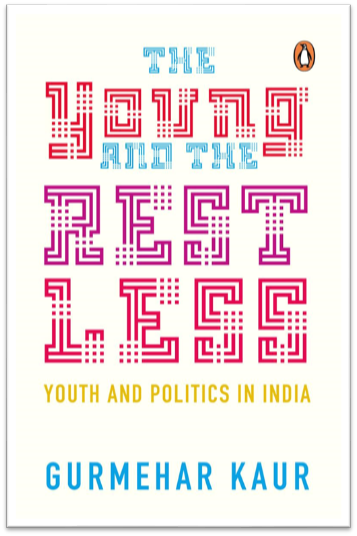 The youth have an important role to play in shaping the future of a nation. There is something refreshing about the young. The perspective that they get on the table, the eyes with which they view the world are different. the young are not weighed down by experience and the ‘lessons’ it offers. And yes, restless they are. One may dismiss relentless as a youthful abandon, but it has its positives. It is time then to pay attention to the young and the restless….

Amidst the recently published books examining politics and politicians, comes a new voice. The author of The Young and the Restless, Gurmehar Kaur, is no stranger to fame and attention. The fiery student is also no stranger to writing. Her first book, Small Acts of Freedom spiralled her into the public eye.

In The Young and The Restless, she interviews young politicians of India. The book was published before the general elections of 2019, that is, before the Modi government came to power. Post that, several developments have occurred which make it all the more interesting to read the book.

Kaur’s own experiences gently mingle with the thoughts and statements from the politicians that she interviews. This makes the interviews uniquely her own. This feat is the most apparent in the interview with Omar Abdullah. Perhaps this was due to the fact that Kaur is connected to Kashmir as well. We get a sense of the Kashmir that he grew up in, and of course, we contrast it with the Kashmir that it is today. Again, in retrospect, following the declaration of Jammu and Kashmir as a Union Territory and Ladkah as a Union Territory as well, reading this specific interview will have a different perspective to offer.

She also has ways of somehow finding uncanny similarities between her background and the politicians she interviews. With Omar Abdullah there is Kashmir, the land they both have roots in; Sachin Pilot is a fauji-child, just like she is. With others there is a link via activism and so on. I like the fact that Kaur looks into little details about the lives of the politicians she interviews that place them in a non-political scenario. Sachin Pilot’s childhood reminiscences; Omar Abdullah’s school days in a Kashmir that was different than what it is today; Soumya Reddy’s experiences that led to her environmental activism; Aditya Thackeray and how he views his legacy…all find expression here.

Another striking aspect of The Young and the Restless is how Kaur puts in so much of her own self into the narrative. In the chapter on Sowmya Reddy for instance, she starts off with talking about her own anxiety and then connects it to the narrative. She touches on a childhood incident of learning about the caste system from her insensitive school teacher, and devoted a good bit of space to that in the chapter on Jignesh Mevani, connecting this to his experience of the Dalit identity. While this is different from what one normally expects to read in a book of interviews with politicians, it also occurs to me, isn’t this difference the point of it all?

Amongst the young group she interviews, some are more known publicly while some are not.  She does admit that the word politician has negative connotations. But how does that play out with young politicians?

“We as a nation, for decades, have witnessed the most arrogant, corrupt, apathetic people in positions of power and public service- now we just expect it to be the norm. I’m happy to announce none of the politicians in this book ate that way. It would be easier to say and accept that it’s because they are young and have just started out, and that the reality of it hasn’t hit them yet, but as I speak to each one of them, their conviction to change the lives of those around them by using their position is so strong that it finally begins to feel like maybe with them things will change for the better. And honestly, that’s the hope, right?”

She acknowledges the difficulties that her interviewees are subject to. For instance, she says, “One can have their heart in the right place and have ideas in their head that can’t be executed without the influence that a position in the parliament can get you, but with an electorate whose wants and needs are complex and whose trust has been gained and betrayed year after year, it becomes a challenge to convince them of your abilities and intentions”.

Given her very obvious criticism of BJP, I was keen to read interviews with Madhukeshwar Desai, from BJP as well as Aditya Thackeray, from the Shiv Sena, but allied with the BJP despite public disagreements between the parties. Both these interviews are quite interesting, especially the one with Desai. We often slot people as belonging to one group or the other, but this interview shows that two individuals can agree to disagree and yet respect each other!

In all, this is a book with a refreshing perspective, trying to inject the point of view of the youth in the political narrative. As she says, “These eight young leaders all belong to different parties, different ideologies and different backgrounds of politics and activism, but what concerns them is their love for the people of this country, and in the end, that is all that matters”! Do read The Young and The Restless for a fresh point of view.

Tags: Gurmehar kaur, indian politics, the young and the restless

The Art of Life Admin – how to do less, do it better and live more by Elizabeth Emens

Are you there, yet? The Man Who Wasn’t There by Anil Ananthaswamy