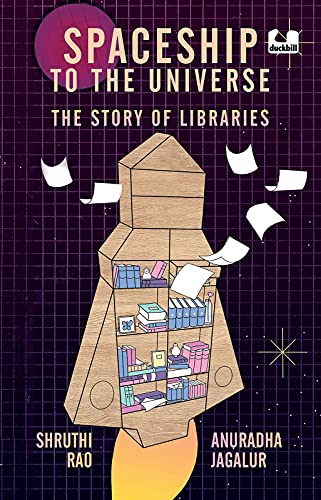 The story of the birth, existence and evolution of libraries is intrinsically linked to that of human and societal evolution itself. Libraries are not just physical spaces that host books. They are living, breathing, changing and evolving platforms that give human beings a glance into their past even as they build on the future. This is the feel one gets in Spaceship to the Universe- The Story of Libraries by Shruthi Rao and Anuradha Jagalur (Duckbill, Penguin Random House)

The range of libraries that the reader will encounter in this book is varied and mesmerising. Right from ancient temples dedicated to books to modern buildings equipped with pathbreaking technology, libraries have come a long way. Yet at the core their essence remains unchanged.

One cannot help but draw parallels between the libraries of the past and those that belong to modern times. As one reads about how the ancients built on collections; how they preserved books painstakingly one is reminded of the Herculean efforts that book lovers and librarians go through to perverse, maintain and maybe even digitalise the knowledge contained in the books. If warring parties and plunderers destroyed libraries and burned parchments in the past, today is no different. As many places in the world reel under the impact of war and political disturbances it is common to see them targeting libraries and bombing them or destroying the collections. But then, people in the past risked lives to save their libraries; and even today the underground libraries that thrive and survive despite all threats is testimony to the fact that libraries remain sacred for us. The story of libraries in the past sometimes bears a resemblance to the present!

As we go through these themes into the book, punctuated with so many examples from the past and the present, one cannot help but admire the spirit of book lovers and custodians of books. We often blame technology for the reduction in reading habits. However, on reading this book one can gauge how technology has probably been the keystone for saving books. Whether it is using advanced X-ray technologies to decipher what is written on parchments, or whether it is digitalising the content so that physical forces can’t destroy it, or whether it is in making books accessible to all, tech has played a role in the evolution of libraries.

When the original ‘Arthashashtra’ written by Kautilya was discovered at the Oriental Library in Mysore, it led to a new understanding of ancient India. The section of ancient libraries in this book is indeed fascinating as it shows how humans started to preserve knowledge. It also marks the shifts from the oral to the written tradition. Kings had their own libraries and books were often gifted to enhance collections.

This is a beautifully researched and presented tome on the history and evolution of libraries. Reading about the ancient libraries made me feel that these were indeed much revered institutes, often possessing valuable handwritten manuscripts.

While there are some great public libraries today, sadly, there is a lacuna that needs to be filled. I recall a photographic ode to a public library (click here to read) which points out to the beauty that we have, as a society, allowed to disintegrate. But it is also heartening to know that thanks to the generosity of individuals who give time, money and books, there are many small private libraries thriving all over the world.

This book covers all kinds of libraries all over the world. One moment you’ll marvel at the magnanimous collections at the British library, and the next moment with the turn of a page you’ll be overwhelmed by the sheer determination of those who run underground libraries with small but curated collections in war-ravaged nations. The readers realize that books indeed have power- in times of peace and also in the face of war.

The deep relevance of libraries can be seen through the different types of ‘niche’ libraries that exist. For example, prison libraries fulfil a pressing need. Consider this- seven out of ten prisoners in the prison library at Munster, Germany, read in their free time! And yes, there’s a library in space as well! Right from the Library War Service established during World War 1, to recent libraries for refugees, the book highlights examples of libraries that have also provided a psychological and emotional refuge to people.

As I delve deeper into this book I realize that the books we take so much for granted actually have the potential to change the world. the struggles of ‘book warriors’ worldover to establish libraries so that they can open windows and doors to the world for underserved and deprived communities, is truly touching. People have ‘rescued’ books from trash, repaired them lovingly and used them in disadvantaged communities. They have made boat libraries in places where rains ravage school libraries on land. And yes, there are also mobile libraries. We do see these often in vans in cities, but you’ll be surprised to know that donkeys and camels have also been often employed to reach books to remotest corners of the world!

This book is a very comprehensive account of the types of libraries that exist and the efforts that book lovers and librarians make just to get books into the hands of eager readers. The book is a testimony on how books uplift, entertain, educate, and heal. With recent examples (such as a protest library at Shaeen Baug or Covid Libraries) to ancient ones, this book is as comprehensive as a book on books can get. Touching upon the concepts of book burning and book banning as well, it is a testimony to the fact that books are potent tools of change and evolution, and our culture must be conductive to literary expression and growth. This is a tome that any book lover must have in their personal library. A story of libraries that we must record for posterity. Ultimately, this book shows how a library is not just a place. It is instead, an idea.

Tags: Book of books, book on books, libraries, the story of libraries

Starry Night: Van Gogh at the Asylum by Martin Bailey

Famous opening lines in literature…well begun is half done?