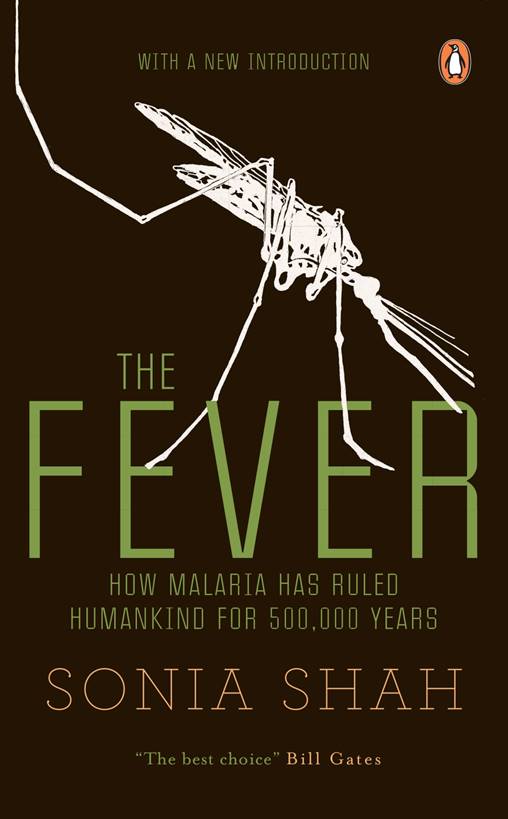 Sonia Shah’s book, The Fever, an account of the journey of one of the most pervasive and deadliest diseases on earth- Malaria, could not have been better timed. Even as the book seeks to uncover the mystery of malaria, there are movements world over to grapple with this disease. As the recently held Malaria Summit London 2018 showed, we have reached a stage where global political will has to be directed towards the eradication of this disease that has plagued mankind for years, and continues to do so. The summit provided backing to this cause and called upon the Commonwealth nations to show bold political action against what is clearly the world’s deadliest disease.

The Fever– uncovering the mystery of malaria

“Humans have suffered the disease for more than 500,000 years. And not only does it still plague us, but it has also become even more lethal. That’s quite a feat for a disease that we’ve known to prevent and cure for more than a hundred years”, writes Shah, thereby setting the context for the book.

Why does malaria tax us so?

Despite knowing how to avoid it, and what causes it, we’ve still not managed to overpower malaria. Why?

The Fever discusses various reasons as to why malaria continues to be a ferocious and pervasive killer. Based on research and interactions with experts Shah outlines several factors that lead to this scenario. The intrinsic parasitical nature of the pathogen, conquests and colonization that exposed those who had no inherent immunity to the germ and many other factors have contributed to this.

Human factors also augment the problem. Rapid Construction and urbanisation, stagnant water, changes in local ecology, building dams and digging trenches for wars are only some of these reasons. In fact, the book even describes how malaria is one of the problems associated with climate change.

Right from the early ages when tribes hacked forests to grow plants thus unknowingly creating great conditions for mosquitoes to breed and thrive in, to modern unbridled urbanization which again gives creates favourable environs, the human-mosquito connections have been going on for years.

As Shah puts it, “Our mining, logging and farming projects continue to disrupt environmental conditions in ways that create and spread malaria to this day,”.

She also quotes many examples of how seemingly progressive developmental measures set off a fertile ground for mosquitoes to attack once more. For example, the agricultural and mineral extraction projects of the Brazilian government disrupted the Amazon jungle environment. The resultant case load of malaria infected patients is anyone’s guess. Closer home, the building boom in Mumbai has been linked to a sharp rise in cases of malaria as well.

Unsurprisingly, she says, “Part of the problem is that some of the most desirable natural resources rest under prime malaria stomping grounds,”.

It takes but a glance at the bibliography behind the book to gauge the exhaustive referencing done for the purpose of this book.

Well, it’s not all bookish stuff though! The references in the book notwithstanding, Shah has travelled across the world to meet experts in the realm in a host of places including South America, Africa and India to unravel this mystery of malaria. Her acute and sharp observations coupled with inputs from experts also makes up a good portion of the book.

What I found particularly interesting is the history of development of the mosquito as a parasite- how the germ developed into a parasite as a part of its evolution. There is also a detailed explanation of how exactly the malarial parasite works- a kind of look into its operations if you please!

Talking of evolution, there are many interesting descriptions in the book that bring out how three different evolutions have resulted in the situation we find ourselves in today: first, the evolution of mosquitoes. Second, the evolution of the plasmodium that the mosquito carries. Lastly, the evolution of human response to this.

In between the more scientific explanations of the spread of malaria, there are some interesting historical nuggets that the reader will enjoy. What role did malaria play in the loss of independence of Scotland? How did it intensify racial bias against Africans, due to different immune responses? Did the Roman penchant for fountains lead to a relatively quicker spread? These are truly the stories that make the book interesting.

Human beings have always been armed with drugs that counter the disease. The earliest known cure from plant extracts such as quinine from the cinchona tree has an interesting history behind it, which is outlined in detail in the book. Who knew that the world wars would lead to the loss of this divine remedy when Japan seized control of the production? However, this led to the development of other drugs in medical labs.

The book traces the development of medical interventions for malaria, in the West as well as the East. For example, artemisinin from China was extracted by referring to ancient Chinese methods. The book chronicles the struggle for the ‘right’ drug at accessible prices against the backdrop of power struggles and unregulated production of drugs, sometimes unfortified with another combination drug (like in case of artemisinin) that caused the parasite to develop resistance against the medicine. Fake drugs and drug monopoly are also issues that plague the efforts of malaria eradication, and she discusses these as well. It is fascinating to read how malaria has defanged drugs designed to obliterate it.

While the book outlines the dismal health care facilities in countries like Africa, the pathetic conditions that force people to rely on traditional cures rather than modern medicines, it is chronicles the beauty of the relentless work that health experts world over are doing to eradicate this disease.

Shah establishes that since malaria is altered by local conditions, a one size fits all approach can’t be used here.

She takes a critical look at different aspects of malaria treatment research such as vaccine research, role of DDT, the neglect of developed nations in making an effort to eradicate malaria, treated nets and so on.

The reader may just also catch hints of irony and sarcasm as she mentions the gap between the highly funded NGOs that take on the disease eradication efforts and the ground realities- showing that sadly, things are more complex than what they seem.

The light touches of humour that mark the book make it quite accessible to non-experts as well. Shah mentions in the book, “It is as if scientists had to come up with a whole new language to talk about Malaria,”. Thankfully however, her own language is quite simple, readable and laced with humour.

But, there are some poignant and sad moments as well. Researchers may talk about malaria and related deaths in a purely scientific way. However, Shah gently brings in the human aspect when she discusses case studies of how the deadly parasite has been fatal for many. In touching descriptions, the text reveals how sometimes despite all the efforts to fight the parasite, a sense of hopelessness sometimes reigns.

The book will be of interest to practitioners involved in malaria treatments, students, those who have keen interest in studying the development and treatment of diseases, people from the pharmaceutical industry as well as those who seek to enhance their knowledge on this topic that has great implications for human health. It also holds important lessons for those involved in policy making and health care.

The Fever by Sonia Shah is a well-researched and robust attempt to solve the mystery of malaria.

Title: The Fever – How malaria has ruled humankind for 500,000 years

OTHER BOOKS BY SONIA SHAH

Tata vs Mistry- The Inside Story by Deepali Gupta