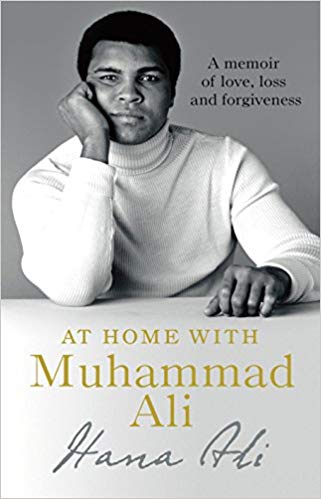 When it comes to famous personalities, we often wonder who the person behind the larger-than-life personality really is. Muhammad Ali, the legendary boxer who ruled the ring during his illustrious boxing career, comes across as a very different person, seen from the point of view of his daughter.

At Home With Muhammad Ali brings alive scenes from the lives of Muhammad Ali and his family. The memoir is written like a story, slowly unveiling the man behind the boxing champion that the world knew. Ali had nine children and was married four times. The writer of this book, Hana Ali, is the younger daughter from his marriage to Veronica Porché.

It all started with a series of tapes that Ali had recorded since 1970s. “If anyone is wondering why I, Muhammad Ali, am making these tapes, it’s because history is so beautiful. And, at the time we’re living, we don’t always realise it,” he mentions in one of these tapes. These provide the raw material for the book.

Accessing these tapes, old published articles and a rich storehouse of memories, Hana recalls her memories of her father, from her unique point of view. How was life with a legend? How did it feel when celebrities flitted in and out of the house like casual friends? How did it feel to ‘share’ her father with the world? Fremont Place, where Hana lived with her mother and sister (Laila Ali, who is also a boxer), somehow pervades the narrative and makes a strong appearance in the book.

The pain of loss

“We all think we know our parents. Some of us may, but in most cases only half of what we think we know is true” writes Hana. One can feel the sense of loss and pain that pervaded her life as she grew up.

“You are not my father, You’re Muhammad Ali,” she says to him once. This statement reflects the mindscape of a child who had to “share” her father since he was a celebrity who was larger than life. To add to that, he had nine children from different relationships, and he was dedicated to all his children.

And yet there is forgiveness….

Despite the pain, there were moments of joy. When he was with Hana, he more than made up for all the inevitable absences. The little memories of daily life are etched in her mind. “Even when he was busy, he made time for us. My memories are rich because of it”, writes Hana. The book describes many of these seemingly little instances that enriched her life. We see Ali as a family man placed in the context of his immediate surroundings.

Ali’s separation with Hana’s mother Veronica is one of the themes that underlies this book. Throughout the narrative there is a sense of questioning why their relationship broke up. From blaming her mother for the inevitable, Hana attempts to see both sides of the story and finally accepts the situation. She also accepts her father’s role in this break-up. She presents his side of the story, without passing judgements. She is also open about the disappointments that she harboured.

There is a sense of catharsis in the memoir, as if Hana has finally exorcised the past and looked at the events with a new eye. Hence the subtitle ‘a memoir of love, loss and forgiveness’ makes perfect sense.

At Home With Muhammad Ali  reveals a lot about him as a person behind the public persona. With all his faults and strengths, Hana attempts to present an honest picture of the man. However, it is equally an attempt to come to terms and make sense of her own childhood and the impact it had on her own life.

I wish there were more details about Ali’s other marriages and children, and their perspectives as well. This would provide the reader with a more rounded image of the man. Honest and poignant as it is, it is still Hana’s perspective.

Ultimately, this is a book about the relationship between a parent and a child, and how childhood memories form an indelible impression on young minds.

“Being a parent and being married is hard. My father may not have done everything perfectly, but he learnt from some of his parents’ mistakes, and my mother learnt from hers, just as Laila and I will learn from their missteps and do better with our children. I guess that’s what we all hope will happen until someone, someday, many years from now, finally has a perfect childhood” writes Hana, providing a fitting message to the readers.

Title: At Home with Muhammad Ali

Infectious: Pathogens and How we fight them by John S Tregoning