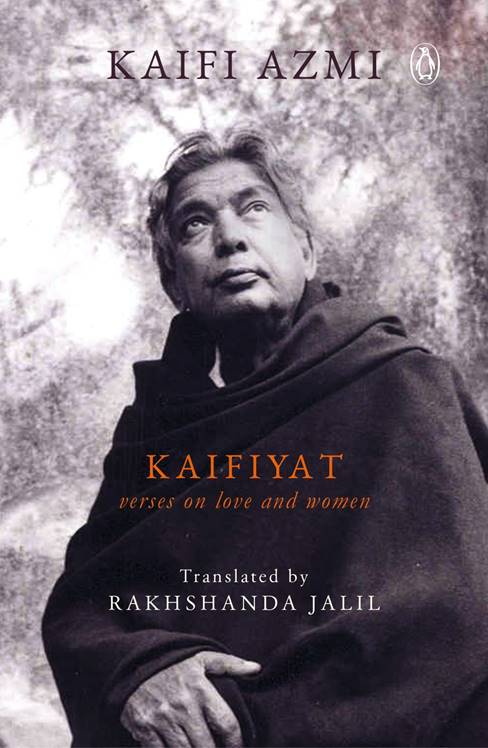 Celebrating the spirit of a true poet on his centenary calls for a dip into nostalgia. It calls for looking at the elements in his life and in his work that made his craft transcend time. Kaifiyat honours poet Kaifi Azmi, who was one of those rare public figures who truly walked his talk. His intense verses seen in the context of his life prove the age-old adage right- The pen is mightier than the sword!

Shabana Azmi, Kaifi’s daughter has written a moving forward to the book. It paints a very poignant canvas against the background of which, the reader can appreciate Kaifi’s poetry in the context of his roles as a family man. His daughter’s tribute brings out the man behind the lyrical, strong and timeless poetry. It also shows how the poetic and the political merged in his life, and just grew stronger as years went by. The afterword by his wife seals the book by honouring the man who as a true poet saw himself as a vehicle of social change.

The introduction to his life and works that precedes the translations in the book also give an insight into his childhood and early experiences that moulded his worldview. Kaifi won numerous awards and state honours for his work. His life and his work resonated strongly with each other. He was also a renowned lyricist. While his film lyrics are found in Devanagari in Meri Awaaz Suno, all his non-film poetry is found in his collected works, Kaifiyat. This specific translation however has a selection of his poetry on women and romance.

Contemporary themes and concerns found expression in his work. His poems spoke out strongly against what was wrong in society and politics. His was a voice against oppression. Today, we live in times where it has become norm to create narratives. People have allegiance to whatever narrative works for them without ever bothering to look at something from varied perspectives. Today, the reputation of the fourth estate has been openly destroyed. It is in such times that a society turns to voices that rise above contrived narratives. This collection reminds us of the duty of the poet or artist in society- to speak up against narratives and to speak up against anything wrong.

Can one expect the richness of Kaifi’s poetry in Urdu to be evident in the same manner in English, no matter how much linguistic prowess the translator has? The translations do bring out the beauty of the verses. The original verses in Urdu are also printed alongside.

Reading his words immediately makes the novice understand how language can be powerful. You never know what surprise the poem will throw up- In Sarojini Naidu he calls her ‘both blazing flower and fragrant ember’ thereby playing with the words mischievously. Woman is a fiery feminist piece that tells the woman to walk beside the man,

« Break the idol of custom, step out of restrictions of conservatism

Cast aside the frailties of luxury and the whim of delicacy

Walk out of the circle of honour drawn by the spirit

If love becomes a prison break free of love too ».

Kaifiyat also has a selection of Kaifi’s film lyrics. Most of these songs are well known and popular gems of Hindi Cinema. They are so familiar as they are a part of our collective culture. However, when one reads these words as verses and poetry, one is able to go beyond their soulful music and appreciate the beautiful lyrics as well.

Kaifiyat is a true and worthy tribute to a poet whose work remains timeless; and whose life continues to shine as a guiding light to seekers!

To the Reader: If you enjoy reading poetry, and specifically translations from Urdu, you may also like to read our story on Meena Kumari’s poetry: https://www.bookedforlife.in/books-and-ideas/meena-kumari-the-poet-a-life-beyond-cinema/

A Heart to Heart on the Adoption Process in India