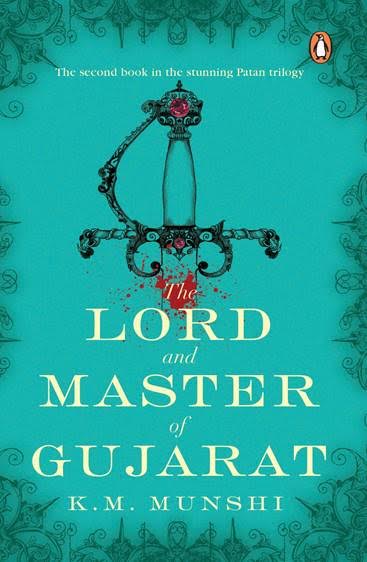 K. M. Munshi’s fiction continues to run to reprints and translations even years after publication. The Patan Trilogy is one of his best known works. It comprises of three acclaimed novels in the realm of historical fiction. The first, The Glory of Patan, introduces the significant characters to the reader. Munjal Mehta, the shrewd but patriotic politician, Minaldevi, the Queen of Patan, her son Jaysinh and a host of other characters.  The second book in the series, The Lord and Master of Gujarat, continues the historical saga. The third book, which is yet to be translated into English, is called Rajadhiraj, or The King of Kings.

The Lord and Master of Gujarat

The events of this story occur four years after the events of The Glory of Patan. The kingdom of Patan is under attack from the army of Avanti. Refugees flank the city. Amidst this arrives a brave warrior -Kaak. A series of events unfold…and they will change Gujarat forever!

A novel that has politics at its heart always scores very high. Politics  intrigues the common man. The famed protagonist of this trilogy, Munjal Mehta, a politician from Gujarat is renowned for his able administration and long vision. His ideological honesty and integrity is deep founded. In a sense, he is the politician people would love to have!

Munshi’s deep involvement in politics gives his political fiction an authentic spin. After all, he occupied several prestigious positions in the administration and he was a close associate of Mahatma Gandhi and also a member of the Indian National Congress.

Munshi gets into the head of the shrewdest statesman- Munjal Mehta, whose sole aim is the consolidation of Gujarat under Siddhraj Jaysinh. The characterisation of Munjal is probably the best. If there is a thing as an ideal politician – Munjal is the one! In an earlier interview to this portal, the translators Ritu and Abhijit Kothari said about Munjal, “He combines in his statecraft methods of the mind and the battle; adapting and changing policies as he sees fit, and leaves his enemies surprised each time,”. No wonder, the character of Munjal remains relevant even today.

Most of the events that Munshi writes about are documented historical facts. However, he does take creative liberties with the same. Hence, one could say that he has weaved in a beautifully imagined story against an authentic historical background.

The romance between Kaak and Manjari is an integral part of this book. Readers of The Glory of Patan, the first book of the trilogy already know about the unfulfilled love between Munjal and Queen Minaldevi. Their mutual respect, deep bond and affection continues with greater force in this novel, and one cannot but be awed by their unique relationship.

Politics and romance at the core of the themes. However, many other themes get intertwined in this story and they remain pertinent to today’s times. “The debates on nation and religion; insider and outsider continue to be relevant today, more so in fact. The role of Jainism in matters of statecraft in Gujarat, the desire to forge a Hindu nation; the beckoning of Aryavrat – all these themes strike a chord,” explain the translators, as they discuss Munshi, the writer in the context of modern times. The Lord and Master of Gujarat also touches upon these themes.

One of the most endearing things about Munshi’s style of writing is that it is very simple. He does not get into long and detailed descriptions. Though this book spans 485 pages, never does the reader feel that it is stretched.  He uses dialogue quite effectively to get the story moving. At any moment in the narrative the reader would be moving fast with the story.

I personally enjoyed the philosophical bits woven into the narrative. Either through the voice of the narrator or through dialogues, Munshi also talks about his views on power, politics and love. For example, the following lines talk about Munjal’s ultimate loneliness…

Great men who chart their own paths become inhabitants of lonely places, distanced from those around them. It is true that they reach great heights, but this height becomes their prison.

Munjal’s and Minaldevi’s conversations with Siddhraj Jaysinh, the king of Patan, are also quite illuminating as they guide the young king towards his rise.

Regional literature has much to offer. Great works of fiction form an integral part of our cultural heritage. We live in times where many of these nuanced stories are getting lost. By taking on the task of translating The Patan Trilogy into English, Ritu Kothari and Abhijit Kothari have enabled an English reading audience to get access to a veritable literary gem from Gujarat!

Even as readers relish The Lord and Master of Gujarat, the second book in the Patan Trilogy, we wait for the third and final book which completes a small part of the greater aim of the discovery of rich Gujarati literature that remains relevant for a modern audience!

Title: The Lord and Master of Gujarat

Tags: gujarati literature, K.M. Munshi, ritu kothari and abhijit kothari, The Glory of Patan, the lord and master of gujarat