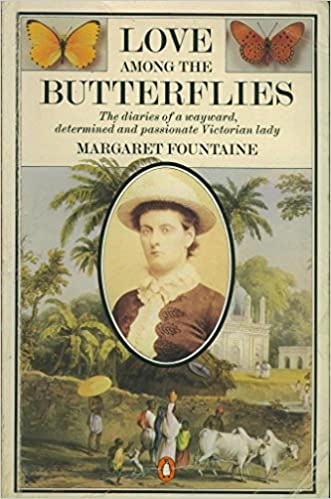 Whenever I come across a book that presents an authentic voice, it is always delightful to read it. Voices from the past offer food for thought and contemplation in the present. This is what drew me to Love Among the Butterflies: The Diaries of a Wayword, Determined and Passionate Victorian Lady by Margaret Fountaine. Who would not be interested in the story of a Victorian woman who defied her times? She travelled across sixty countries on six continents over fifty years collecting butterflies. This was at a time when women were steeped into conventional roles, barely travelling outside their town.

As I read this book, which as you will soon know comprises of curated entries from the personal diaries of Margaret Fountaine, I wanted to look out for those telling signs that made her the success that she was. What was it that shaped her unique life philosophy? What made her excel in a very unique profession like lepidopterology? What was the secret of her success in this less known and yet male dominated profession? How did she face the numerous challenges life throws at a woman who is ahead of her times? This collection of the diary entries of Margaret Fountaine has gems of inspiration and delight for modern readers.

“Bath society was in the same narrow grove where I had left them, and naturally it was just as uninteresting to them that I had been half across Europe with my bicycle as it was to me that they had lived in the uninterrupted spheres of parish work”

Margaret Fountaine was a country clergyman’s daughter born in 1862 in England. When she died in 1940, she was in Trinidad, West Indies. The wild and fearless woman had come a long way since her birth and upbringing in England. Her conventional childhood was indeed a sharp contrast to the life that she led. When she died she was already known as a distinguished collector of butterflies or ‘diurnal lepidoptera’ as she described them.

While her butterfly specimen collection was willed to the Castle Museum in Norwich, there was another bequest, a set of manuscripts that were to be opened only 40 years later. These contained her diaries and it is thus her story condensed into this book, thanks to the painstaking efforts of W.F. Cater.

I think that diaries reflect so much not only about the person writing them, but also the social and cultural climate of the era. The mores of Victorian England play out in her diaries. I almost see her as a Jane Austen heroine, though of course, Austen wrote much before Fountaine lived.

She started maintaining her diaries when she was in her teens and wrote well into her seventies. Going through so many letters written over a lifetime is not easy. W.F. Cater has done a remarkable job editing these diaries that run into a million words. The reader reads many words produced as written, and at other places Cater narrates the story himself, filling up the gaps.

What really caught my attention was the fact that Fountaine lived quite unconventionally. The childhood may have been conventional, but her life certainly wasn’t. Her first love, was a man, a drunkard, who was inferior to her socially. But she travels alone to be with him, and stays put for a week, only to return home with a false hope awakened and then crushed.

The book reflects the role of money and financial independence for women. And of course, once one has these, one needs to have the foresight to grab opportunities, which she did! Thanks to an inheritance from a rich relative, she could afford to travel. Otherwise, women in her times did not have that leisure. Maybe it was that money which enabled her to travel, that in turn opened up and widened her horizons.

Her first visit outside the British Isles, to Switzerland, evoked this reaction: “I had lived all these years and never known till now how beautiful was this earth”. It was also on this trip, when she would have been in her late 20s, that she discovered her love for butterflies. This is a defining moment in her life. She realized that the dormant naturalist in her is now awake.

I found it fascinating to read about the places she describes which I have also visited! She was a different traveller in another time and historical era. I loved revisiting places like Paris, Naples, Bern and others through the eyes of another woman in another time in history.

As she travels, she also becomes bolder and accepting of the attentions of men. The diary entries of her 30s are filled with three things- evocative descriptions of the places she travels to, the men she encounters, and of course, butterflies! One of her lovers, influenced her with the idea of free love. This somehow must have agreed with her free spirit. She continued to have many admirers and lovers as she travelled about.

Not only in matters of love, but also in general society, she recognised the value of freedom. “Bath society was in the same narrow grove where I had left them, and naturally it was just as uninteresting to them that I had been half across Europe with my bicycle as it was to me that they had lived in the uninterrupted spheres of parish work” she writes, clearly indicating the intellectual claustrophobia she experienced whenever she went back home from her travels.

The reader can actually sense a surge in confidence as Margaret journeys on in life. “I am in a better position in the game of life; I have even climbed a rung or two of the ladder of – shall I say fame? My relations with men have advanced considerably, inspite of the years I drag behind me,” she writes. I felt this was a very powerful statement to make. Her growing age was accompanied by growing confidence- both sexually and also in terms of where she was placed in life.

We all have a philosophy of life, that we develop through our experiences. A reader will be able to see the development of her life philosophy through the diaries. “Freedom is the crowning joy of life. Thank god there are a few on earth I really care for; I would there were none. I want to see all I can of this beautiful world before I have to leave it, and life is so distressingly short. It is the affections that hold us back from great enterprises, it is the affections that tie us down to one spot on earth, if not in body, in spirit. And then at the end of it all life is over and we have accomplished none of those great things our soaring imaginations once led us to suppose were to be achieved,” she wrote.

The world was her oyster

The early diaries describe her adventures in Europe. However, for a woman of her spirit, the world was her oyster. She soon looked to Turkey, Syria, Beirut and Constantinople. For me, this chronicle also serves as a travelogue to these places which have drastically changed today. It was here that she met Khalil, a Syrian dragoman who became a lover and later husband. With him she spent a little short of three decades in great happiness. They spent two years in South Africa before going to America, then Havana and Jamaica. Her travels also took her to Australia, Singapore, Kuala-Lumpur and again America.

Touring Europe as a single woman was one thing. But doing the same in North Africa quite another! As I read the book I was amazed to note how she braved inhospitable climates and completely strange cultures in the quest to study, catch and document butterflies.

The rise of a kind of feminism informed by her experiences is a delight to watch. it develops as the journal progresses.

The world through her eyes

World-events through the eyes of an individual writing at a particular time in history always offers a fascinating perspective. Her journals mention the plague in Europe, the sinking of the Titanic and spread of malaria in Africa. It also struck me, how personal and therefore relatively honest, personal diaries were. Many years from now, when we try to get a sense of people’s life in the present era, we may look at their social media feeds. However, there is a big difference. These feeds are curated in a manner as to present a particular image to the world.

Fountaine’s diaries also help a reader glean her professional achievements in the field. Very often she was the only woman in the teams that went to seek butterflies. Her grit and determination to chase, capture, document and then breed butterflies was truly commendable. Her passion shone through.

Sometimes, the stories of remarkable women get lost in the pages of history. But, the instructions to open her manuscripts seem to have unleashed a flood of information that motivated two volumes of her diaries. The first is Love Among the Butterflies and the second, also by W.F. Cater, is titled Butterflies and Late Loves. Another book inspired by her diaries is aptly titled Wild and Fearless: The Life of Margaret Fountaine by Natascha Scott-Stokes. I am glad that her chronicles tell us so much not only about the times she lived in but also about how she lived in midst of these on her own terms.

Anand Neelakanthan’s Vanara- an immersive saga about the legend of Sugreeva, Baali and Tara