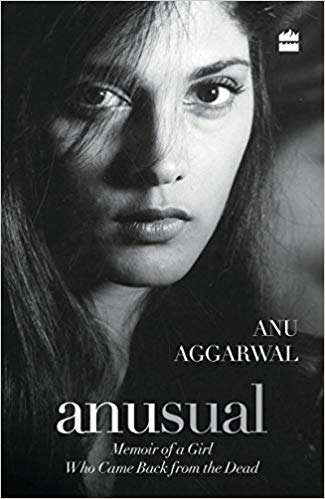 I bought “Anusual” way back in 2015 from Kitab Khana, Fort. The book attracted me because of its tagline – ‘The Memoir of a girl who came back from the dead’. I did not realize then that the author of this memoir, Anu Aggarwal, was the scintillating and glamourous actress whom I saw in a movie on T.V. when I was a school kid. When I was very young I was fascinated with the cinema, and loved to watch old films which used to be shown on the television. The movie I loved and adored was ‘King Uncle’ a Rakesh Roshan film. Bollywood actor Jackie Shroff played the main lead. His heroine was the sensual but beautiful ‘Fanny’, who was as I gathered after reading ‘Anusual’, Anu Aggarwal herself.

As far as I could recall, Aggarwal was a really beautiful woman and a charming actress. But after reading her memoir which is captivating, beautifully penned and astonishing, I realized that sometimes a glamorous life is not really all that wonderful. The book is soul searching, shocking and un-putdownable.

I remember back when I was five or six years old in the early 1990’s being told of a very good Bollywood film called ‘Aashiqui’. My mother wanted me to see it whenever it would come on T.V. I never got the chance to watch it, but that was Aggarwal’s first break with director Mahesh Bhatt. Aggarwal was a super model, an advertising diva, a Bollywood successful actress, a glam doll, but as she states in her sensitive memoir, she did not really want to be known as just some glam doll for the rest of her life. The memoir dissects how Aggarwal was always looking inward, wanting to find the truth of life and real happiness. This really astonished me, especially when after making it big Aggarwal left everything to join a yogi ashram, to learn yoga and to meditate.

Let’s analyze this in perspective. In India, every second girl wants to get a break as a model or a Bollywood actress. Bollywood is the lifeline of many cinema crazy Indians both here in India and abroad. Bollywood pays big time. If your movie becomes a super-hit like Aggarwal’s ‘Aashiqui’ did, then you have crossed the first hurdle. Then it’s all up to choosing good movies, playing your cards right, being dedicated to your craft, honing your craft, and with the right advisors, you can become big – a millionaire or a crorepati. When I was reading ‘Anusual’ I was thinking of the lavish weddings of some of the top Bollywood actors and actresses that took place last year 2018; when I heard how many crores they spent on the festivities, I was shocked that so much of money was spent, numbers going into 100 crores plus, and in a country where some people don’t even get a square meal a day.

Where are our priorities? That is answered by Anu Aggarwal in her memoir ‘Anusual’. Being a glam doll is not worth the hype. It’s a hollow life, and we need to set our priorities to make this world a decent place to live in where there are no  hungry children due to drought or famine; no slum children who leave school due to financial difficulties; no widows left to fend for themselves because their farmer husbands have in desperation committed suicide; where minors are not sold as sexual slaves; no Dalits still struggling with the still prevalent caste system; where no riots take place over petty issues; where one is not judged because of the color of their skin. And yet, when we see these decked-up dolls of Bollywood – what messages are conveyed to our minds? That a ‘great life’ is the ‘elite way of life’ or is there something more to it? That’s what ‘Anusual’ is about and the reason why she left showbiz and became a yogi in training.

Anu Aggarwal’s journey through the corridors of a yogi ashram is described lucidly and poignantly. Her relationship with her guru, her good works, and how she experienced the truth deep within her, comes out very well in this book. Yoga is the focus of Aggarwal’s life. She has sold everything she has ever owned in the name of taking ‘sanyas’, something that scares me but which she was brave enough to do back in 2001. She has made it her life’s mission to train children and adults in the practice of yoga for free, as part of her ‘sanyas’. She has found her peace. But she was tested in her faith and would been dead long ago.

You see, Aggarwal was a victim of a terrible accident that put her in a coma for 29 days. All the doctors working on her had given up hope and opined that she would die soon. But on the 30th day, she came out of her coma. Struggles continued, but Aggarwal’s determination to rise above her situation and to become one with the oneness in her, won through. It was a miracle, and she felt the miracle was a way of telling her that now was the time to take ‘sanyas’ – to give up everything and follow the oneness, to follow the path of yoga and start the process of collecting good karma. And most importantly—to know that love is more than what the body’s groin can ever understand.

I am an existentialist, but reading books like these sometimes makes me wonder about the power of the human will, mind, and that thing called ‘the soul’. About the woman Anu Aggarwal, there is a lot to say. She is independent, daring, forthright, blunt, beautiful, and radiant and so many other things that you will encounter in her well written memoir, about how she came back from the dead.

I am so glad I read this book. Believe me, I just couldn’t put it down. It’s a short book, good for reading during the week. Spiritual enthusiasts will definitely love this book as well as anyone looking for something fresh in a Bollywood celebratory memoir. With all the celebratory sham books that are being churned out cheaper by the dozen these days, the story of Aggarwal’s unique and different take on life is like a breath of fresh air.

The book ends with a question about a probable Bollywood comeback. Since I’ve not really paid attention to the movie world for over fifteen years, I may have missed her comeback. I am quite a recluse myself; I hardly get out of my office-cum- writing hut. So, if anyone reading this knows about her comeback do let me know in the comments section.

Fiza Pathan is a teacher, publisher, and award-winning author of ten books. She has won over forty literary awards. She lives with her maternal family in Mumbai and writes novels and short stories spanning diverse genres. She blogs on www.insaneowl.com.

Making it Big – The inspiring story of Nepal’s first billionaire, Binod Chaudhary, in his own words